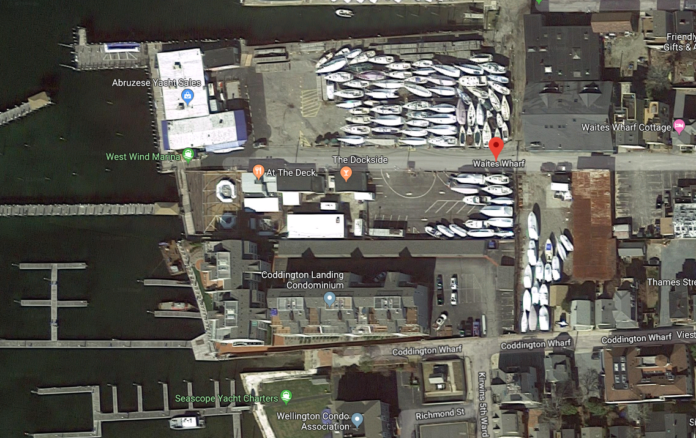 The City of Newport’s Planning Board will host a special meeting on Monday at 7 pm in the City Council Chambers at Newport City Hall to discuss the demolition permit application for Waites Wharf.

Update – Nov. 18: This application was continued by the Planning Board on Monday night to January. More details to come.

This is the next step in a long process that would allow Thomas Abruzese/Harbour Realty to knock down @ The Deck, Dockside, a warehouse and a single-family home on Waite’s Wharf. Abruzese is looking to construct a 150-room transient guest facility, 91 rooms allowed), with a standard restaurant, banquet and wedding facilities on Waites Wharf.

In June, What’s Up Newp was the first to report that Abruzese/ Harbour Realty, LLC AT ELS, owners of several properties on Waites Wharf, had filed an application with the Rhode Island Coastal Resources Management Council (RICRMC) to demolish some current structures on the property in order to build a hotel on Waites Wharf.

The RICRCMC application was the first step in achieving approval of the proposed project. The application and plans are now moving on to Newport Planning and Zoning Boards.

Property owners with 200 feet of Waite’s Wharf have received the following letter (dated August 5th) from the City of Newport’s Department of Planning, Zoning, Development, and Inspections;

This is to notify you as owner of property located at (address redacted by What’sUpNewp) that the proposal listed below has been filed with the Office of Zoning & Inspections, City Hall, Newport, RI. You are being notified as an owner of property that is located within  200 ft.of the petition. PETITION OF HARBOUR REALTY, LLC, applicant; HARBOUR REALTY, LLC, AT ELS, owners; for a special use permit and a variance to the dimensional requirements for permission to demolish the existing structures and construct a 150-room transient guest facility, 91 rooms allowed), with a standard restaurant, banquet and wedding facilities, and provide 266 off-street parking spaces on a noncontiguous lot, (all off-street parking must be on the same lot as the use required), and to allow of use of public right of way to maneuver into and out of spaces, (Use of public right of way not allowed), applying to the property located on 0, 1, 16 & 25 Waite’s Wharf,23 Coddington Wharf, and 20 West Extension St., TAP 32, Lots 155, 267, 268, 272, 248, & 293,

(WB zone). Said proposal is on file in the Office of Zoning & Inspections City Hall, and may be examined on the City’s website https://www.cityofnewport.com/city-hall/boards commissions/boards/zoning-board This matter is scheduled to be heard at a public hearing to be held at 7:00 p.m. on Monday, August 26, 2019 in the Council Chambers, City Hall, 43 Broadway. At hearing, opportunity will be given to all interested parties who wish to be heard. Comments may also be submitted in writing or email. Email comments to spires@cityof newport.com. Mail or deliver written comments to the Office of Zoning & Inspections, City Hall, 43 Broadway, Newport, RI 02840 or present them at the hearing. Call 401-845-5451/52 for additional information”.

The plans , according to a letter for the Office of Planning and Zoning, include demolishing of the existing structure and construction of a “a 150-room transient guest facility, 91 rooms allowed, with a standard restaurant, banquet and wedding facilities, and provide 266 off-street parking spaces on a non-contiguous lot”.

Requests for comment on the project from Abruzese have gone unanswered.

The owners of Fifth Element have also been given the green light by Newport Zoning Board to construct a 40-room hotel on Broadway. 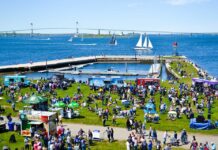