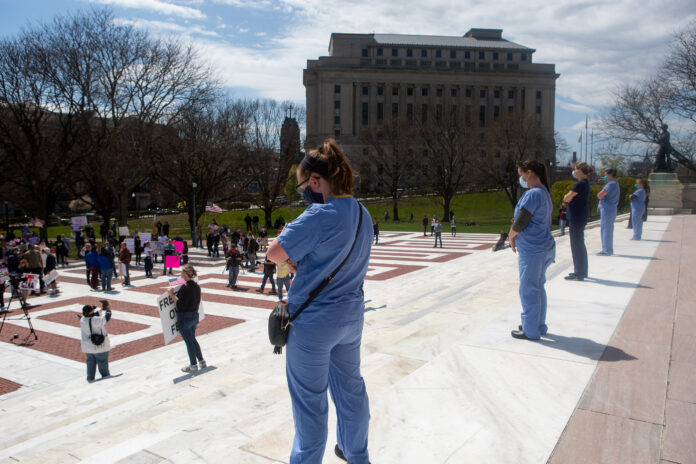 While Governor Raimondo and Director of Health Dr. Alexander-Scott were hosting their daily briefing inside the State House on Saturday afternoon, a rally to reopen Rhode Island was being held on the State House Lawn.

The “Knock It Off Rally” to reopen Rhode Island, which was hosted by “Rhode Islanders Against Excessive Quarantine”, brought approximately 100 people to the State House, including a group of several health care workers who stood in a silent protest on the steps of the State House against the rally and in support of the Governor’s Stay at Home Order.

According to an email received on Sunday morning from an organizer of the protest, “Autumn Covid”, the group’s goals today were to raise awareness of poor information being spread at large, the irreparable damage being caused by the statewide business shutdown, and the indiscriminately applied stay at home advisory”.

In response to a question from a reporter during the press briefing, Governor Raimondo said that she understands the frustration of protesters but asked that they practice social distance. Governor said that if they are violating the social distancing rules, they should “knock it off. “Not doing that is selfish,.” she said.

In addition to the protest, the group says it is “releasing an open letter to the Governor, and asking all private citizens to call their state representatives in support of its’ petitions. We are asking the state legislature to resume its responsibilities and steer the state forward with the Governor, in lieu of further executive orders”.


Help support our locally owned, independent newsroom
We know you care about independent, fact-based coverage of Newport County—that’s why you’re here. But it costs money to keep our community informed. Support What’s Up Newp today and help fund the essential hyper-local journalism of tomorrow.