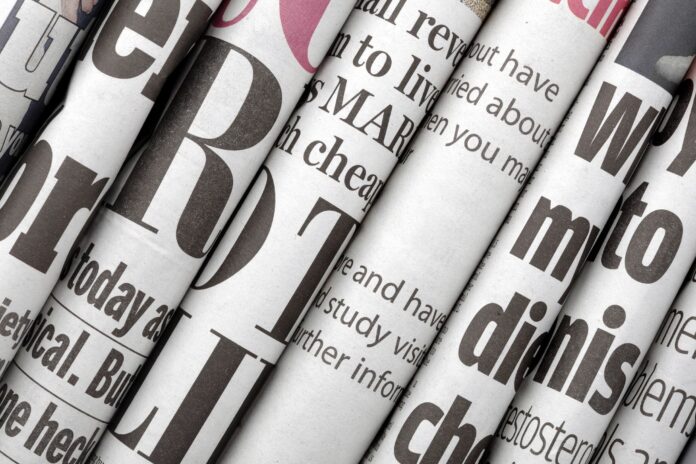 U.S. Senators Jack Reed and Sheldon Whitehouse, both from Rhode Island, and more than a dozen of their colleagues are calling on government to provide a bailout for a beleaguered news media,

A news media that has clearly been further decimated by the impact of the coronavirus on the advertisers upon whom they rely.

Without that support, the Senators say in a letter to Senate leadership, “communities across the country risk losing one of their key sources of accurate information about what citizens need to know and do in response to the COVID-19 pandemic.”

Let me put this as simply as I can – THERE SHOULD BE NO SPECIAL GOVERNMENT BAILOUT OF THE CORPORATIONS THAT CONTROL MUCH OF THE MEDIA. And that coming from someone who has been a practicing journalist for 30 years, someone who believes that the future of democracy relies upon a vibrant and INDEPENDENT press (whether it’s print, digital, radio, television, or even smoke signals).

What’s happened to much of the local media is that giant corporations (or sometimes what once were giant corporations) took over local media from community owned groups. That includes places like the Providence Journal, Newport Daily News, (Gannett Publications), and NBC 10 (Sinclair Broadcasting Group). The focus changed from serving the community to pleasing the shareholders.

That’s not only my view, but was the view of the distinguished journalist Ben Bagdikian, a Providence Journal alum who went on to become dean of the journalism school at the University of California at Berkeley. Bagdikian includes his thoughts in his many times revised book, The Media Monopoly.

The media in general has suffered from greed and evolution. Greed because giant corporations bought locally owned news outlets, shifting allegiance to shareholders, and laying off scores of journalists for the benefit of the bottom line. Evolution, because technology, the internet, digital, all came roaring on the scene with few print outlets ready for the change. They have, and still do, struggle to determine how to monetize online publications.

The Senators’ letter has sparked debate among journalists, some of which would like to see print or other outlets survive, even in such a reduced state, and others who fear that government funding leads to the perception or reality of government influence and the potential for licensing.

There is no doubt that there have been local casualties:

Why not accept government funding for the media?

“Journalists must be watchdogs and no dog bites the hand that feeds it,” said Steve Buttry, who in 2009, when he wrote that, was Information Content Conductor for Gazette Communications in Cedar Rapids, Iowa. “It’s just wrong. If government funds, government will regulate. Freedom of the press has to include freedom for the press to fail.”

I recall years ago, when I was active in The Newspaper Guild, the union representing many newspaper employees throughout North America, a battle over this very issue of whether government and media should virtually be in bed together.

Many of us had learned that the Guild leadership had made a deal with the CIA for a program in South America. We developed a coalition, of which I was a part, that included the likes of representatives from the NY Times, Washington Post, San Francisco Examiner, Chicago Tribune. We were concerned that this Guild/CIA partnership could endanger foreign correspondents working in South America. In a hard-fought battle, we defeated the leadership and ended the program.

We were concerned then of a government/media partnership and undue influence on the journalists upon whom we all relied…and rely… for unfettered reporting.

I have no doubt in the integrity of our two Senators, and of many if not all of those who signed this letter. I do have suspicions of others, particularly those who have made it a preoccupation to denigrate the press, constantly claiming the media is peddling FAKE NEWS, while only government and favored media outlets like FOX are sharing truths.

The issue provoked this response from a former Journal editor: “They what?? What happens when the press prints something they don’t like? Do they have to give the money back?”

It may seem tough to resist, but it’s never the time to even raise the perception that anything that’s on the internet, on radio, in print or television may be influenced by anything other than the facts.

Letter | Sandra Flowers: I ask that you re-elect me and that you approve question #2

Deadline approaching for election-related letters to the editor