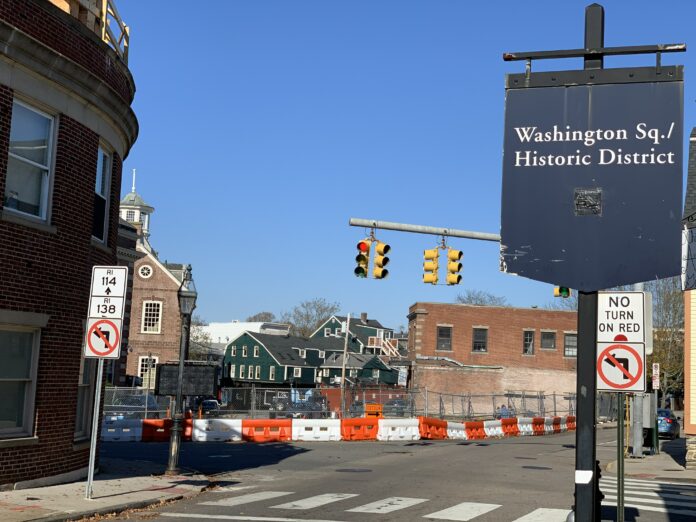 The Rhode Island Historical Preservation & Heritage Commission (RIHPHC), the state agency for historical preservation and heritage programs, has weighed in on the Historic Newport Spring Project, as well as the closure of Court House Street.

Church Community Housing Corporation, a tax exempt 501(c) (3) charitable organization, holds title of the property, is the fiscal agent for the project, and is overseeing the environmental cleanup of the site.

In a letter to Stephen Ostiguy Asset Manager Church Community Housing Corp, on November 5th, 2019, J. Paul Loether Executive Director and State Historic Preservation Officer at the RIHPHC, shared the following on behalf of the RIHPHC;

Thank you for contacting the RIHPHC regarding Church Community Housing Corporation’s (CCHC) efforts to preserve and protect Newport’s “spring box” as part of the project noted above. As you have indicated in your recent emails to Tim Ives of my staff, this archeological site is of immense historical importance in the history of the City of Newport as well as Rhode Island as a whole. The RIHPHC strongly supports the CCHC’s efforts to professionally document this treasure and is keen to provide any assistance it can to your organization in terms of ensuring the spring box’s long-term preservation and protection.

With regard to the Project, it is also our understanding that, subject to approval by the City of Newport, the planned new public park may subsume the portion of Court House Street running immediately behind the Old Colony House. In that regard, please note the following:

The National Historic Landmark Inventory-Nomination form for the Newport Historic District specifically references the historic importance of the city’s streets, stating, “The colonial seaport city is defined by an outstanding collection of nearly 300 surviving seventeenth-and-eighteenth century buildings and by an irregular grid pattern of streets which was established in the eighteenth century.” Among the most significant surviving streets in this pattern is Court House Street.

In combination with its intersecting and neighboring streets, Court House Street represents the meeting of colonial Newport’s public (Old Colony House, 1736), private (18th century residential buildings to the north, south, and east), and religious (Touro Synagogue, 1763) interests. Today, Newport’s existing 18th-century streets also converge to function as an urban gateway to significant neighborhoods that developed just beyond in the 19th century; these include the Kay Street-Catherine Street-Old Beach Road Historic District to the east and the Bellevue Avenue-Ochre Point National Historic Landmark District to the south.

Historic streets provide continuity, connection, and context for the historic resources around them. As public circulation spaces, they fundamentally root the experience of residents, tourists, and scholars alike in relation to an historic environment. Thus, the RIHPHC strongly believes that any permanent disruption of the historic street pattern resulting from the Newport Spring Project would pose an inadvisable, adverse effect to the historic character, significance and integrity of the Newport National Historic Landmark District.

Given the historic significance of Court House Street, the RIHPHC greatly prefers that the street remain in its present form and use i.e., fully functional. However, should the City pf Newport allow part of Court House Street to be absorbed into a new park, the RIHPHC strongly recommends that the essential historic characteristics of the street–i.e., those features that continue to visually mark it as a “street–be preserved, even if regular vehicular access to the street is no longer permitted in the future.

Thank you for the opportunity to comment. If you have any questions in this regard please contact me…”.

“With the understanding that I am speaking for NHS only, not RIHPHC, whose opinions are offered by Paul Loether:

I very much want to support any project that honors Newport’s history. But the Newport Historical Society has some significant concerns about the plans for this one:

What’s Up Newp reached out to the Newport Spring Leadership Committee for comment on Wednesday;

“As Mr. Loether hopes for, there will be features that continue to visually mark it as a street and recognizes the historic significance of the street,” Dick said.

Dick believe Newport has a unique opportunity here to preserve history and says she recognizes the concerns of both groups.

Dick said that her organization would get a full response to us on Wednesday night. When, and if, we get that response, we’ll add it here.

City of Newport: Stay healthy & stay informed by signing up for e-alerts