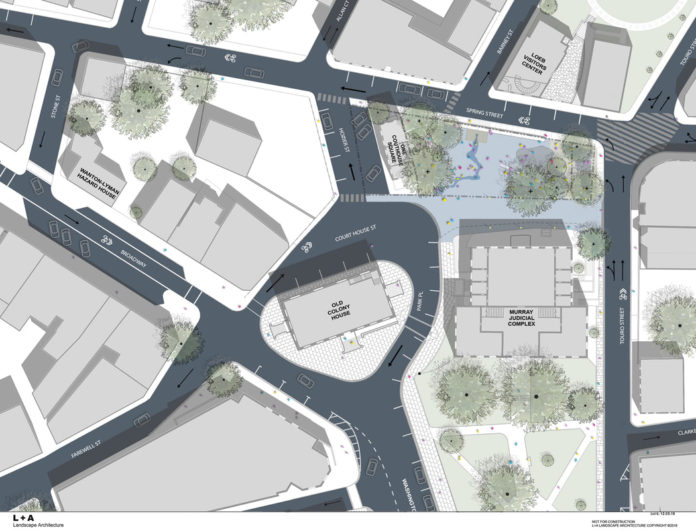 After some discussion on how they would measure goals and success of a temporary closure of Courthouse Street to simulate the proposal of the Newport Spring Project, Council voted 7-0 to move forward with the resolution. The plan will close off Courthouse Street and simulate what Newport Spring Project hopes will be permanent. That is expected to begin around August 1st, according to City Manager Joe Nicholson and will continue until September 30th.

Changes could be temporarily coming for the intersection of Spring Street, Touro Street, Courthouse Street, and Stone Street this summer.

Following a workshop held on June 10th to discuss The Newport Historic Spring Projects traffic studies, at least two members of the Newport City Council have proposed a trial period for the proposed plans.

The Historic Newport Spring Project, or “Spring Project” as sometimes called by the City, sits at the site of Coffey’s Gas Station and would be transformed into a park to “celebrate and interpret the city’s founding and its role in securing religious freedom in this country”.

Among many things that would change in that area and would be the closure of the City-owned Court House Street between Touro Street and Park Place.

Councilor’s Kate Leonard and Jeanne-Marie Napolitano will introduce the resolution Requesting a temporary road closures on Courthouse Street and Stone Street to simulate the proposal of the Newport Spring Project, Beta Group, Inc. and VHB from July 1-September 30, 2019 at Newport City Council’s meeting on June 26th.

According to the Newport Spring Project’s website, their project is described as follows;

“The Historic Newport Spring Project’s central goal is to celebrate, at the place of Newport’s founding, a key and integral part of Newport’s history that has been overlooked by historians, governments, and indeed many of our citizens for centuries: that Newport was explicitly founded on the values of freedom of religion, religious tolerance, and separation of church and state.
​
Once complete, the Historic Newport Spring park will preserve this unique historically significant site in a manner that provides public access and civic enjoyment, improves traffic and pedestrian circulation and safety, and fosters cultural and economic vitality”.