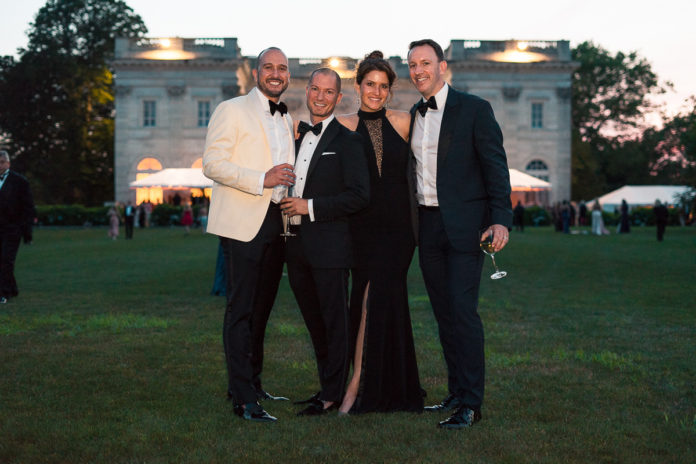 Newport Polo is pleased to report a record amount in auction proceeds from its annual charity gala, topping more than $35,000 to benefit this year’s beneficiary, the Newport Music Festival.

More than four hundred and fifty of Newport’s glitterati made red carpet entrances around town at the various events on Friday, August 2, 2019 to welcome the South African Polo Team and support jewel of the community, Newport Music Festival at Diamonds Are Forever, the 19th annual International Polo Charity Ball.

The sold-out black tie gala embraced the glamorous world of James Bond and South African cultural influences to rule the night and captivate the senses with exotic flavors, rhythms, decor, and auction treasures.

Celebrations began with a Meet & Greet reception for the South Africa team on the Cliffwalk Terrace of The Chanler.  Gala-goers then made their way along famed Bellevue Ave mansions to Marble House for a champagne welcome where the terrace offered passed hors-d’oeuvres and a specialty martini bar serving the James Bond inspired Vesper Martini and South African Port Elizabeth Martini by The Cocktail Guru, before drifting with the sounds of a jazz duo across the lawn to immerse in twilight ocean views and scenic Rhode Island sound in the backdrop for photos at the Japanese Tea House,

Diamonds, well-tailored dinner jackets and exotic animal prints inspired the many fabulous interpretations of the bond-esque South African theme.  Gala Ambassadors Virginia Gambale, president of the board, and Cynthia Sinclair, board member emeritus from Newport Music Festival were joined by Polo Ambassadors Laurel & Rob Howe to glad-hand arriving guests in a parade of festive attire.

As the sun went down, the bidding heated up on exclusive Silent Auction opportunities featuring original works of art, exciting adventures, excursions and getaways, designer accessories and jewelry, wine, dinner & theater tickets and other highly sought-after packages from generous donors.

Under the canopy, the terrace was decorated in garden motif with bold South African hues and exotic florals on the mild summer night, perfect for dining al fresco.  Keepsake gifts from Paxmonde were at each place setting.  Live musical entertainment from Decades by Dezyne added to the magic. Welcomes were MC’d by Newport Polo President, Dan Keating, including:

Grammy-nominated baritone Trevor Neal was accompanied by Suzanna Laramee on piano for a special surprise performance before Sotheby’s auctioneer, Hugh Hildesley, offered up the nights crown jewels in the live auction.  Leading the prizes was a private 5th Avenue Party and performance by Neal; Patriots vs. Chiefs tickets, an autographed Tom Brady Jersey, a South African Kruger Safari, and two more exclusive experiences to delight the highest bidders.

Blackstone Catering’s chef created the South African-inspired hors d’oeuvres, 3-course dinner with South African springbok paired with South African wines in honor of the visiting team, and desserts.  Après dinner guests joined the party to heighten the competition in Silent Auction bidding until the auction tables closed, and enjoyed refreshments and dancing until the stroke of midnight.  The odyssey’s finale ascended to the Skybar, atop Clarke Cooke House for a last dance.

19 years and counting, the International Polo Charity Ball is the social highlight of the polo season, when polo players, enthusiasts, and supporters come together for a lively celebration while benefiting worthy charitable organizations. Festivities carry on through the weekend as the international guests of honor take to the polo field to challenge USA.  An annual New England Lobsterbake by the legendary McGrath Clambakes catering specialists gave a spectacular finale to the weekend’s events.

Proceeds from the Live and Silent auction will assist the Newport Music Festival in expanding Education & Outreach programming and in bringing world-class musicians to Newport to perform, inspire, and be inspired.  Offering 45 concerts to over 10,000 audience members during the month of July, the Festival commits itself to bringing top-tier talent, such as Metropolitan Opera and Broadway stars, to Newport as well as making music accessible to all with Free Family-Friendly Lawn Concerts.

We gratefully recognize our supportive Auction donors, without whom our mission to support Newport Music Festival would not have been successful:

The Power of Juice

Theater by the Sea

The Chanler at Cliffwalk

Marble House was commissioned by Mr. and Mrs. William K. Vanderbilt, designed by Richard Morris Hunt, and completed in 1892.  The house was inspired the Petit Trianon at Versailles, built at a reported cost of $11 million, of which $7 million was spent on 500,000 cubic feet of marble.  Alva Vanderbilt was a leading hostess in Newport society and envisioned Marble House as her “temple to the arts” in America.  Marble House instantly became the social and architectural landmark of Newport, ushering the port’s transformation to a luxury Gilded Age resort.

For more information about the 2020 gala, donations, or to nominate a beneficiary, email Agnes Keating, GM of Newport Polo: agnes@nptpolo.com

View our Facebook Album or Website album of images.  Visit the Schedule and Tickets page for all upcoming events.