The Newport Folk Festival arrives Friday. Read on for my Top 10 picks for the 2019 Festival. NOTE: These are my personal choices – sets that I hope to catch. It’s not intended to be an all-encompassing “must see” list. Everyone’s picks are different – List your Top 10 in comments below!

Jeff Tweedy – No brainer here. Wilco is my favorite 21st century band, and Tweedy has been a festival regular for the past decade or so. Jeff appears as a solo artist this year, but don’t be surprised if a few guests show up. Expect to hear material from his recent album, Warm/Warmer, and perhaps a few new tunes from the upcoming Wilco release Ode to Joy. Tweedy plays the Fort Stage Saturday at 4:40.

Amy Ray -The Indigo Girls ruled NFF as headliners in the 1990’s, an important, but often overlooked period in the Festival’s history. As one half of that duo, I think we can now call Amy Ray a legend! This year, Ray is fronting her own band, The Amy Ray Band, fresh off an inspiring new release, Holler. Rumor has it she may be a guest in other sets as well. Keep an eye out! Her band’s set is Friday at the Harbor Stage at 4:15.

Our Native Daughters -This supergroup of American roots artists came together around Festival veteran Rhiannon Giddens, who wanted to offer a voice for African American women who suffered under slavery. Giddens (Carolina Chocolate Drops), Leyla McCalla (Carolina Chocolate Drops), Allison Russell (Birds of Chicago), and Amythyst Kiah did just that on their acclaimed album Songs of Our Native Daughters, released in February. Don’t miss this set Sunday at 2:45 on the Quad Stage.

Liz Cooper and the Stampede –Nashville-based Liz Cooper credits the Tennessee city as a key inspiration on her 2018 release Window Flowers, an album that gotten considerable notice in Americana circles. Her dream-folk sound is sure to send sweet vibes as the notes float along Narragansett Bay Friday. She plays the Quad Stage at Noon.

Yola – Yola has come a long way to Newport Folk. The UK native has certainly lived the blues, at one point in her past, forced to ask for change on the streets of London. She started as a background singer for Massive Attack, The Chemical Brothers and Iggy Azalea and recently released the Dan Auerbach produced Walk Through Fire, where she lovingly blends R&B, country and pop sounds. She plays the Harbor Stage Friday at 11:30.

Cedric Burnside – You’re sure to get a full dose electric blues from Mississippi native Cedric Burnside. His raw, gritty blues sound reflects his Holly Springs, Mississippi origins, where he was raised by “Big Daddy,” his grandfather, the late singer/songwriter/guitarist R.L. Burnside. Preview his sound on Benton County Relic, his 2018 Grammy nominated album. He plays the Harbor Stage Friday at 12:40. You can also catch Burnside at the Knickerbocker Music Center in Westerly Thursday night before the Festival,

Phil Lesh and the Terrapin Family Band– Once a Deadhead, always a Deadhead. Longtime Grateful Dead bass genius Lesh has been fronting his own band for over a decade now. They feature tunes from the Dead songbook and beyond. Expect the good vibes to flow freely as Lesh and Co. close the Fort Stage on Friday.

Songs for Beginners – This late addition is expected to be a run through of Graham Nash’s classic 1971 release. You know, the one with “Military Madness,” “Simple Man” and “Chicago.” It’s expected that a bunch of artists will cover the album – Nash himself is unlikely as he is in the midst of a European tour. Check out the set Saturday at the Harbor Stage at Noon.

The Unknowns – Newport is famous for surprises … and rumors. Based on the clip art, “The Collaborative” is expected to be a set of mainly female artists singing on the topic of female empowerment. The other unknown is the Festival closing set, “If I Had a Song,” a special set on the dedicated to the 100th anniversary of Pete Seeger’s birth.

Download the App, print out a copy, apply sunscreen and hydrate! See you at the Fort! 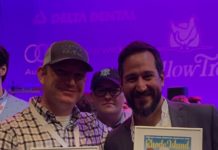