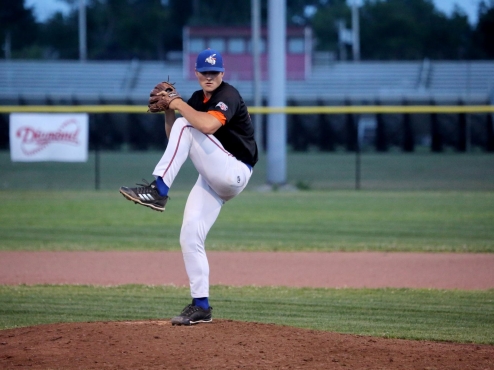 Newport (20 – 22) fell to the Danbury Westerners (18 – 21) by a score of 15–8 in the final matchup between the two Southern Division teams. It was an offensive showdown at Rogers Park on Monday night that featured a total of 25 hits and four home runs. Tyler Mattison fell to 2–2 on the year when he was bounced from the game after giving up seven runs (three earned) on seven hits in two innings. Kevin Stone earned the win for Danbury.

After Newport took a 1–0 lead when Dillon Plew scored on an error by Danbury’s Matt McDermott, the Westerners answered in the bottom of the second, highlighted by a grand slam by Daniel Franchi. Eleven Westerners batted in the inning as the team collected seven runs on five hits and a walk to take a 7–1 lead.

Newport’s offense worked slow and steady throughout the game, scoring one run a frame from innings two-through-six. Tim Tawa belted his seventh home run of the season in the third while John Mazza added an RBI double in the fourth. As Newport inched closer, now trailing 7–3, Justin Lebek added a two-run home run in the bottom of the fourth to increase the lead to six.

Newport continued its consistent scoring when Jack Gethings ripped an RBI double in the top of the fifth followed by a Tawa RBI single in the top of the sixth. The Gulls got to within three after a two-out, three RBI double by Kody Hoese, but Danbury’s offense continued to produce in the eighth thanks to a three-run home run by Lebek off of Holden Cook, Lebek’s second of the evening. Cook was replaced by Mike McCaffrey after surrendering six runs on six hits and two walks.

Offensively, the Westerners outhit the Gulls 15 to 10. Newport stranded 11 runners on base but did have five doubles and one home run as a collective. Tim Tawa led the way with two hits including a home run, two RBI, and three runs-scored. Dillon Plew went two-for-four with two runs-scored while Hoese added three RBI of his own.

With just two games left in the regular season, Newport is now 1.5 games behind the Mystic Schooners (21 – 20) for third place in the Southern Division. The Gulls will travel to Sanford tomorrow to take on the Mainers (22 – 17) at Goodall Park, first pitch set for 6: 30 p.m.