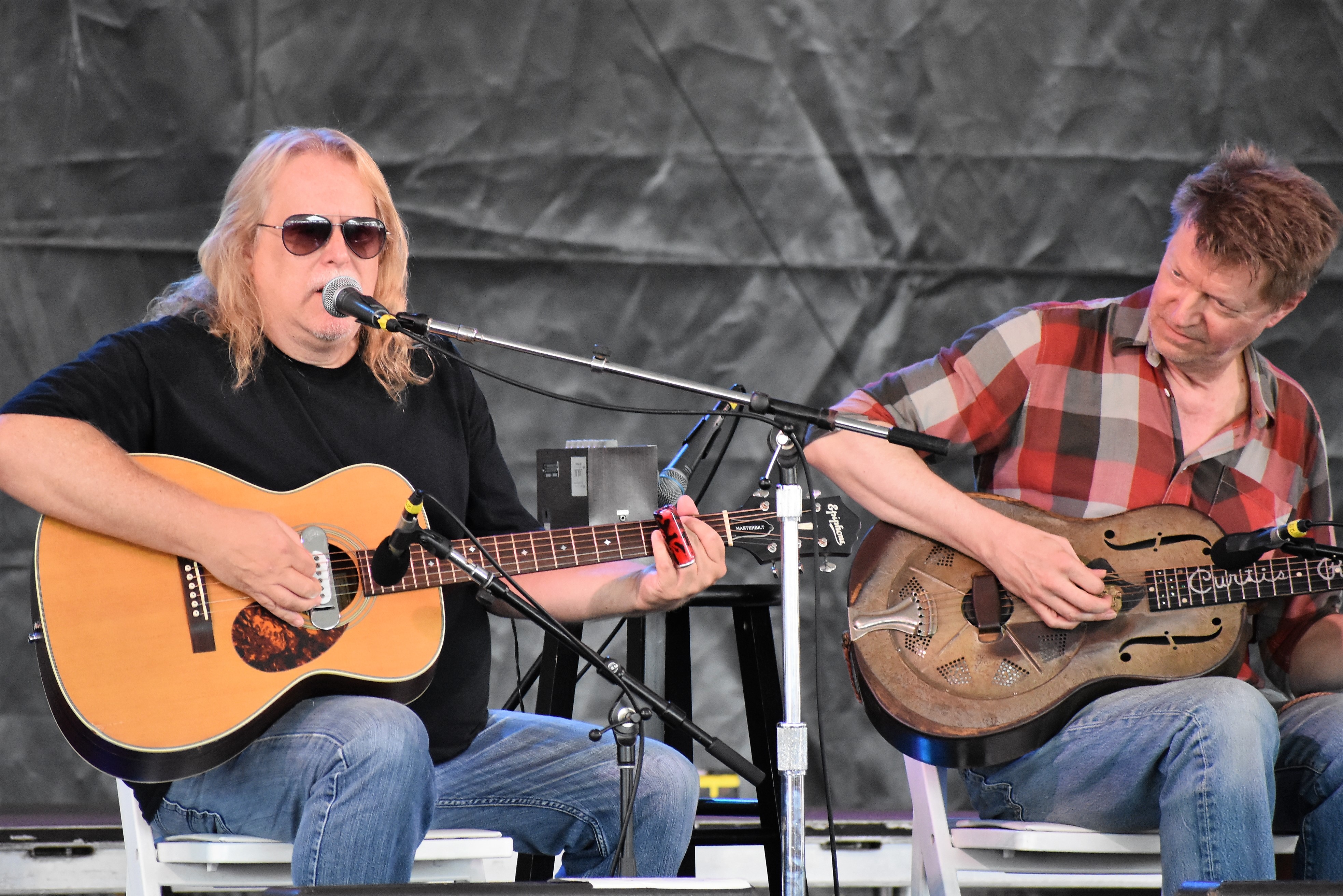 Warren Haynes is known to many as the former guitarist for The Allman Brothers Band and founder of the popular jam band Gov’t Mule. Haynes made a surprise appearance Sunday at the Newport Folk Festival joining Wilco guitarist Nels Cline in a special set dedicated to the Curtis Rogers resonator guitar.

WhatsUpNewp sat down to an exclusive interview with Haynes just after he wrapped up his set with Cline. We asked him how the set came about.

“Nels contacted me a couple of months ago and said that he was doing a set and that he and Jay Sweet has been talking about some collaborations, doing something he had never done before. Somehow, my name got thrown into the mix and he called me and asked if I’d be interested. I said I’d love to do it!”

This wasn’t his first time at Newport.

“I played here with the Allman Brothers (in 2007) and I’ve been contemplating coming back and doing something completely different, more stripped down. I enjoy these opportunities … I feel like you should take advantage and do all these different things. I feel really lucky to be able to do all of it. Its what keeps me excited and inspired. I wouldn’t want to just do the same thing all the time, that’s where the tour fatigue would set in. It keeps me looking forward to whatever comes next.”

As we’ve been doing all week, we asked Haynes what Newport Folk means to him.

“Some of my favorite artists of all time are Son House, Howlin’ Wolf and Bob Dylan, people that have famously played here. I have a picture on my wall from (renown music photographer) Dick Waterman. He gave me a picture of Son House from Newport that’s hanging on my wall at home. So much of the music that’s come through here is what inspired me to play and sing.”

Haynes joined Cline for three songs including one each from Muddy Waters and Tom Paxton, who both made Folk Festival appearances in the early 1960’s.

“They both seemed like nice wells to draw from for this sort of thing. I think people were expecting something from the bluesy side and maybe not so much the Tom Paxton thing. When I do solo acoustic shows, it goes all over the place from Folk music to Blues to Country music – there’s a whole nother side to what I do when I’m stripped down to a solo acoustic. I really enjoy that to, it allows me to express myself differently. I’m very appreciative of the fact that I’m able to do that.”

Like the Newport Folk Festival, Haynes’ fanbase continues to grow. He noted that teenagers and families attend Gov’t Mule shows.

“It’s really refreshing to meet 14-year-old kids in the audience and they’re like ‘tonight’s my first Gov’t Mule show and I just discovered you in the last few months.’ But they’re also discovering for the first time Led Zeppelin and Hendrix, Pink Floyd and The Allman Brothers. Its having the same impact on them that it had on us because that music is that powerful. Its timeless music, when somebody is curious and open minded from any era, when they hear the stuff that’s really timeless like that, it has to make an impact. That’s why we do what we do.”

He’s hopeful for the future generation of rock stars. “It seems like there’s a surge right now of good young musicians, I think it was a little dormant for a while and now its starting to feel good again.”

We noted that Festival Executive Producer Jay Sweet sat and watched the set from start to finish, something rarely seen at Newport.

“I loved what Nels did with Brandon before I came on, it was beautiful. It took a nice turn, it was a really beautiful set,” noted Haynes.

Haynes was at the Festival with Rhode Isalnd resident Graham Mellor, his Production Manager and Front Engineer with Gov’t Mule. He joked with Mellor, while acknowledging he was a valuable part of the Gov’t Mule operation. Fortunately for all concerned, the timing of the Festival could not have been better for Haynes.

“Gov’t Mule played in Jay, Vermont last night (Saturday) and it was the last show of this run. We dropped everybody at the airport in Boston and the bus kept coming down here. I’m home for a few days and then we go to Norway and then come back and start the rest of this American tour.”