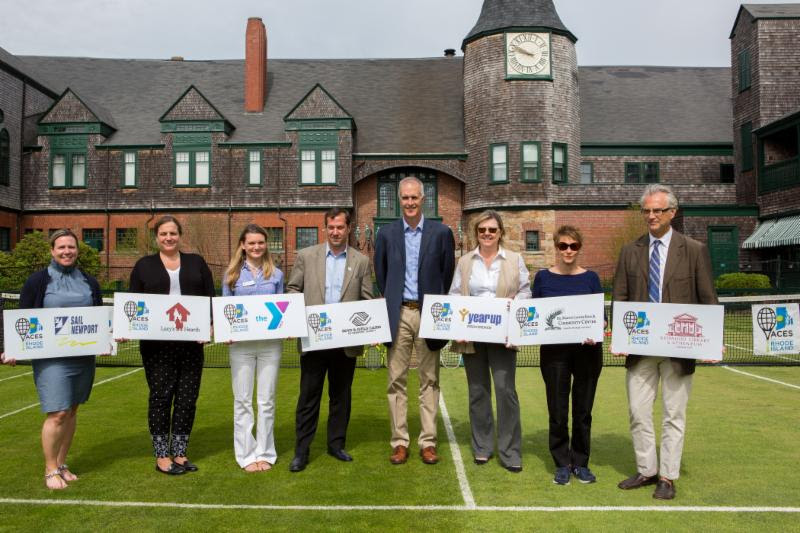 When the ATP World Tour comes to Newport this July, every ace fired off on stadium court will mean more than just a point on the scoreboard- it will also result in raising significant funds to support local charities. The International Tennis Hall of Fame has partnered with seven local non-profits to launch Aces for Rhode Island, a new community fundraising effort that uses the upcoming Dell Technologies Hall of Fame Open as a vehicle for creative fundraising to support a variety of important causes.

Through Aces for Rhode Island, the participating non-profits are soliciting pledges for every ace served on center court during the tournament. Pledges start at just 5 cents per ace, with the option to give more at the donor’s choosing. With approximately 300 aces expected, a 5-cent pledge will bring in at least a $15 donation and a $1 pledge could result in a $300 contribution designated to the participating charity of the donor’s choice. The program has limitless potential to generate significant, impactful funds for groups in need.

Aces for Rhode Island kicks off today and will run through the tournament, which will be held July 15 – 22, 2018. Pledges can be made at www.HallofFameOpen.com/aces, where donors can select the charities of their choice to support, or opt to have their contribution split equally among all participating charities.

“We are thrilled to be able to utilize our existing programming to benefit these area non-profits and the communities they serve through Aces for Rhode Island. The International Tennis Hall of Fame is also a non-profit organization, and as such, it is an institutional priority to serve with a philanthropic focus. It is important and it is our responsibility to give back to our community, and we are thrilled to be able to partner with these tremendous organizations. Aces for RI is an important step as we expand our philanthropic efforts,” stated Hall of Fame CEO Todd Martin.

For the inaugural year, seven area non-profits will participate in the program.
They are:

Learn more in video above.
Funds raised through the program will support causes that range from youth development programs to organizations that provide food and shelter to educational institutions. Each participating non-profit offers programming and services that align in a similar manner to the work of the International Tennis Hall of Fame, be it in providing programs to inspire and enhance the lives of kids in need, encouraging healthy lifestyles, or a focus on education and historic preservation.

In addition to participating in Aces for Rhode Island, many of the groups have also made plans to bring their youth groups to the Dell Technologies Hall of Fame Open to be part of the festivities.

“We are really excited to be part of an innovative program that joins several non-profits in the community to raise money and awareness for our causes through a great annual event,” stated Joe Pratt, Executive Director of the Boys and Girls Club of Newport County. “The Boys and Girls Club provides much of our services via scholarship programs, and the funds raised will be a great benefit to those programs. We’re grateful to the Hall of Fame for the opportunity, and look forward to getting the pledges going.”