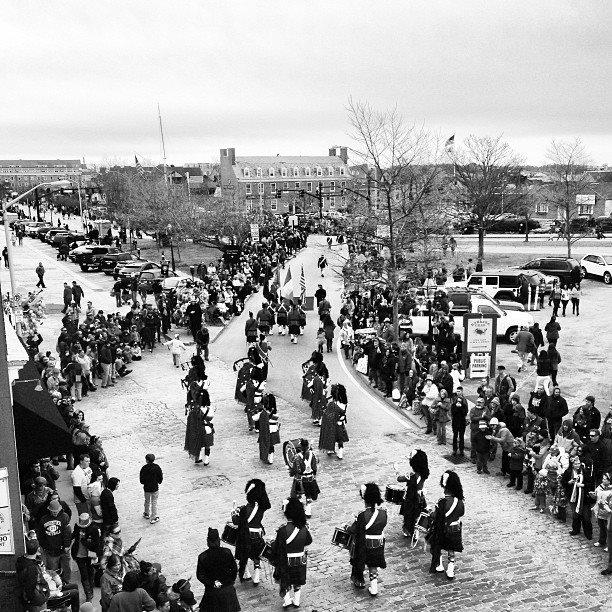 The 62nd Annual Newport Saint Patrick’s Day Parade will be held, rain, snow, or shine, on Saturday, March 17th, 2018, here are some things to know about the big day.

You Might Also Like – What’s happening at bars and restaurants before, during, and after the 2018 Newport Saint Patrick’s Day Parade

The 2018 Newport Saint Patrick’s Day Parade will begin promptly at 11:00 am from Newport City Hall and will proceed to Carroll Avenue at Saint Augustin’s Church in the heart of the Fifth Ward. The parade this year, which does happen rain or shine, is estimated to last 2 hours and will include Pipe Bands, Marching Bands, Fife & Drum Corps, Clown Units, reenactment units, and a host of local, state, and regional organizations including police and fire units, social/fraternal organizations, Boy Scouts, Girl Scouts, Schools, and non-profits.

Since the reorganization of the parade in 1956, the annual Newport Saint Patrick’s Day Parade has grown into one of the biggest events in Newport. The Parade is the highlight event of a month-long celebration marking the end of winter and the beginning of spring, the 42nd Annual Newport Irish Heritage Month.

According to event organizers, more than 50,000 people from across, Rhode Island, New England, and the country will visit Newport to watch the parade. Newport’s Parade is considered the largest Saint Patrick’s Day Parade in Rhode Island and one of the biggest in New England.

The cost of hosting a parade of this magnitude is over $47,000, as most of the participants are paid a fee. Local schools use their fees to defray the costs of fielding the activities. Other groups, such as the Shriners Clown Unit and Motor Corps, donate their fee to charities such as the Shriners Burn Centers.  Although the parade is very expensive to host, it is beneficial to the larger community in so many ways, local hotels and restaurants consider it one of busiest days of the year.

The yearly button and logo designs try to incorporate the vocation or interests of the Parade’s Grand Marshal. This year’s button incorporates a classically inspired Lady Justice, clothed in a flowing white robe, holding both the symbolic instruments of her office, the balance and the sword.  The words “Justice” surrounds her in both English and Gallic.  The colors of the national flag of Ireland are interwoven into the design. 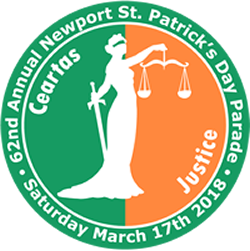 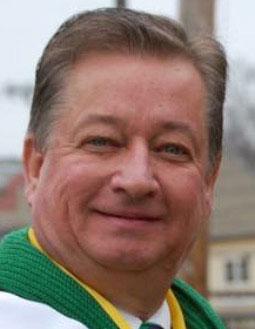 5 – You Should Support The Businesses That Make The Parade Possible

Support the businesses who have an official Newport Saint Patrick’s Day poster in their window, they have financially contributed to the Parade and make the event possible. 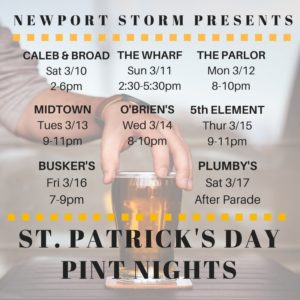 Brick Alley Pub will use their philanthropy arm, Brick Alley Cares Foundation, to host their 8th Annual Post-Parade Day Cleanup. Join the Brick Alley Pub crew and volunteers at Brick Alley Pub between 10 am and 12 pm on Sunday, March 18th to help with the effort. Volunteers at this event will enjoy free St. Pat’s t-shirts (while supplies last) and a $10 food credit for Plumby’s Burger to use on Sunday afternoon. More details

The Parade Committee will host their 11th Annual Saint Patrick’s Day Family Celebration from 1 pm to 4 pm at the Martin Recreation Center (“The Hut”), located next to Newport Public Library at 35 Golden Hill Street. This event is a non-alcohol event. There will be entertainment with Bag Pipers, Edge Drumline, Irish step dancers, Tony the Dancing Cop, pirates, face painting, and more. There will be a “How Green AM I” contest with cash prize ($150, 100, & 50) and a $100 cash door prize!   There will also be giveaways. Entry is free!

Traffic will be congested in the downtown area from about 9:00 am to 3:00 pm. Parade participants will begin staging on lower Broadway at about 9:00 am, so it is recommended that people coming to Newport to view the parade avoid trying to drive down or park on Broadway. The two best routes into the city with available public parking are Westbound on Memorial Blvd, right onto Bellevue Ave. (northbound), left on Church St. and right into the Waterfront Parking lot (situated between Church and Mary St.) Farewell St. South to America’s Cup Ave., and right into the Gateway parking garage.

Traffic detours are historically in the following areas;

In addition to the many private parking lots throughout downtown Newport, the City operates several public parking lots in Newport.

Note: This map is to show you the location of the public parking lots, DO NOT follow the “key” on this map. Where parking is available on the map does not represent what will be available this weekend. 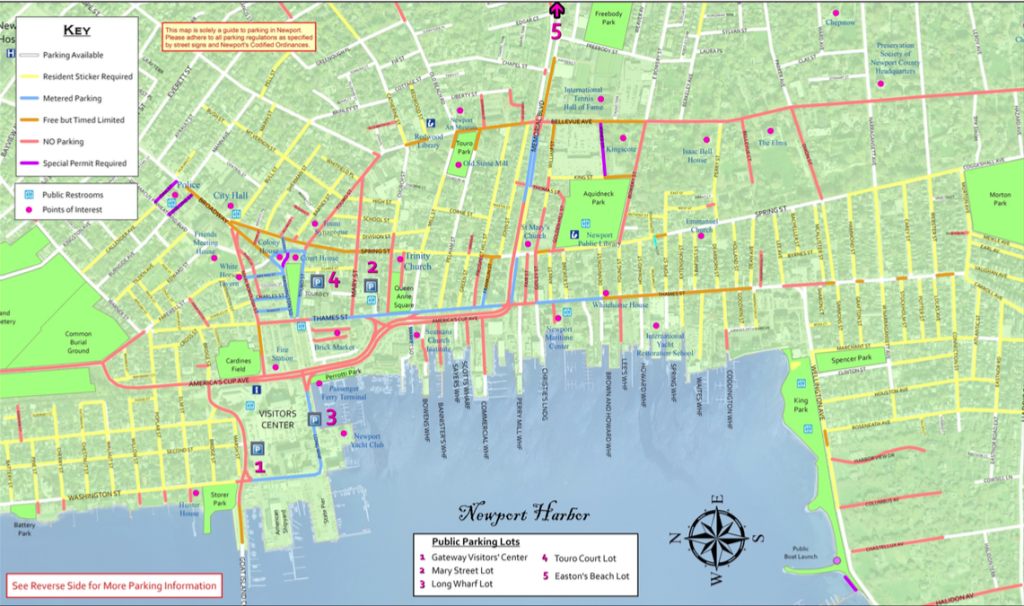 Parking is historically prohibited on the following streets from 5:00 am to 3:00 pm.

All vehicles parked in restricted areas will be towed, note there is no parking along the parade route.

You Might Also Like – What’s happening at bars and restaurants before, during, and after the 2018 Newport Saint Patrick’s Day Parade

For more information and updates on the Parade, visit http://www.newportirish.com/.