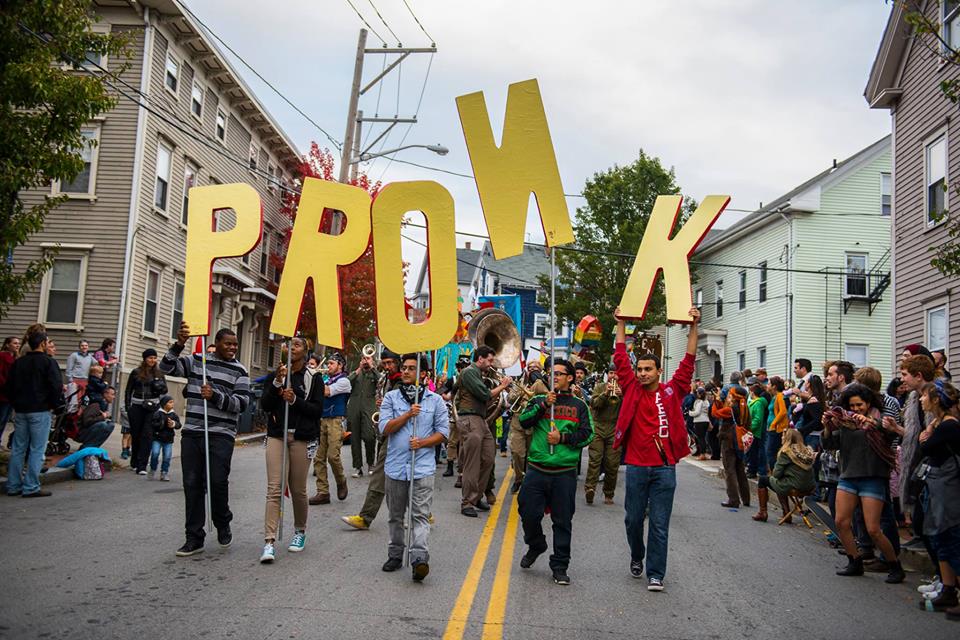 Ringing in its 10th year, the Providence Honk Fest has become an early fall tradition around these parts. PRONK signifies the end to Rhode Island’s festival season while showcasing Providence’s premier brass bands along with introducing acts from all over the globe. On Columbus Day, or as the organizers would like to refer to it as Indigenous Peoples’ Day, the city becomes the epicenter for a parade of music, art and activism. The party really starts on South Water Street with nearby bar & grill Hot Club getting packed with dancers and romancers. The nearby Mile End Cove is the spot where the bands perform with an invasion of energy.

“In such turbulent and trying times we aim to create a space where artists, activists, youth and community members can come together to take a deep breath, make art, dance in the streets, unite over shared values and joyfully recharge our batteries,” volunteer organizer Avi David states on this year’s edition of the fest. “As a long-term goal, we hope to build stronger bridges between artist and activist communities in our city. Art can be a powerful weapon for fighting injustice, offering new perspectives and building peace! This year at PRONK, we’ll feature 18 street bands from all over the world, 15+ local organizations who work tirelessly for justice and we will have various art-making stations set up along the Providence River.”

“Bring t-shirts, bandanas, and totes for our Black Lives Matter / DACA / Immigration-Reform screen-printing stations!” David exclaims on how people can get involved. “Bring art supplies to help create a massive tapestry supporting Penn State University’s Student Bill of Rights! Bring your tambourine and dancing shoes and help us ‘Reclaim the Streets for Brass, Beats, and Feet’!” Fellow volunteer Steve Wynne also adds: “PRONK is the most fun you can have in Providence with your clothes on.”

Longtime fest stalwarts What Cheer? Brigade and Extraordinary Rendition Band will be joined by fellow Providence noisemakers Big Nazo, Kickin’ Brass and Black Out Dance Crew. The Trinity Academy for the Performing Arts will have three acts of their own taking part with the TAPA Breakdance Crew, the TAPAstry Hip Hop Dance Squad and the TAPA Percussion Ensemble. Boston will be well represented with Boycott, Emperor Norton’s Stationary Marching Band, School Of Honk and the Second Line Social Aid and Pleasure Society coming down. New Creations Brass Band from New Orleans, Unity Street Band from Syracuse and Filthy FemCorps from Seattle are going to be making their presence felt. Damas de Ferro are coming all the way from Rio de Janiero to join in on the fray as well.

PRONK always is a wild time and it’s highly suggested that you come check it out. Once you immerse yourself in what’s going on for the first time, you’ll want to go back every year.