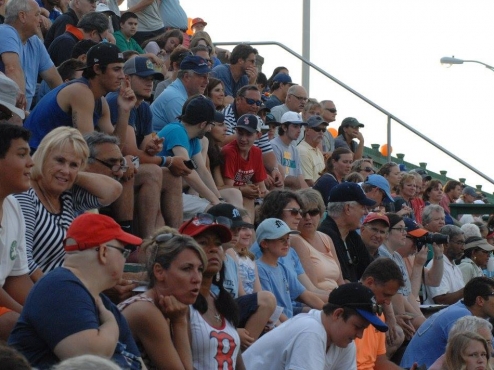 After dropping their first two games of the 2017 season, the Newport Gulls were able to hold off the Upper Valley Nighthawks by a final score of 4–3. Gulls’ RHP Reid Anderson got the start on the mound at Cardines Field on Friday night, while Upper Valley’s Joe DeRosa took the hill for the Nighthawks. Anderson, a rising senior at Brown University, picked up the win throwing five innings while allowing just one earned run on five hits with five strikeouts.

The Nighthawks jumped out to an early lead scoring one run in the first inning after Ryan Jeffers’ single drove in Anthony Godino. The Gulls responded in the second inning with a long homerun to straight away centerfield by Liam O’Regan, who tallied two hits on the night, walking once and scoring two runs.

A couple of infield miscues by the Gulls in the top of the third gave Upper Valley a 2–1 lead, but in the bottom of the frame, Newport answered right back with a run of their own. Adam Duarte dropped down a sacrifice bunt to move Kevin Heiss into scoring position at second base after he singled to start the inning. Kameron Misner followed the small-ball script with a sacrifice fly to left field, scoring Heiss from third base, knotting up the game at 2–2.

In the fourth inning, Newport added two more runs off DeRosa thanks to the hit parade by Newport’s O’Regan, Tyler Green, and Nicholas Raposo. The Nighthawks wasted no time answering in the top of the fifth inning to cut the score to 4–3, as Jeffers recorded his second RBI of the game driving in Cade Sorrells on a double.

With a 4–3 lead going into the sixth, Gulls’ manager Al Leyva turned to reliever Dylan D’Anna through the middle innings of the contest. D’Anna delivered an impressive performance on the hill giving up zero runs on only two hits while striking out seven through three innings of work.

Holding onto the one run advantage heading into the ninth inning, Rhode Island native Matt Murphy came in to shut the door on Upper Valley. Murphy induced a groundball for a double play to close things out for the Gulls. The hard throwing righty recorded his first save of the year in his first appearance on the mound for Newport.

Newport (1–2) will be back in action on Saturday night as they hit the road to take on the Vermont Mountaineers (2-0) in Montpelier, Vt. First pitch is set for 6:30 p.m. As with every away game, you can watch and listen on the NECBL Broadcast Network.

The Gulls will return home to Cardines Field on Monday when they host the Mystic Schooners at 6:35 p.m. on Newport Gulls Scholarship Night. Nine summer camp scholarships will be given away courtesy of Newport Gulls Baseball.