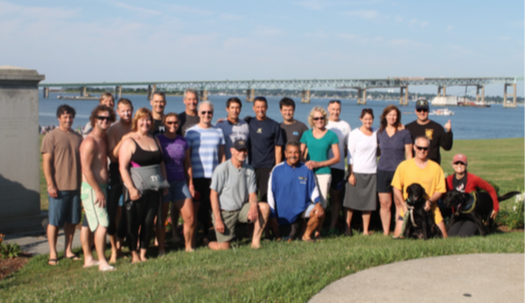 Every year since 1970, swimmers from across the region, and country, gather in Newport to partake in Save The Bay’s iconic 1.7-mile swim to Jamestown. While some travel far, some are already home at the starting line. This team of swimmers is the Navy Newport Swim Team.

The Navy Newport Swim Team has been doing The Swim since 2010, the first year Save The Bay introduced the team concept to the event. The size of Team Navy fluctuates from year to year, but generally consists of about 20 swimmers from both military and civilian backgrounds. Four of these swimmers are Navy Reservist Dave Polatty of Narragansett, retired Chief Petty Officer Dan Force of Portsmouth, Diann Uustal of Jamestown and Lt. Aaron Lamay of Newport.

“You don’t have to be in the military. Anyone who has any affiliation or desire to support Team Navy is welcome to join the team. The majority of our team is actually not active duty; only a few people are,” Polatty said. In fact, five of Polatty’s close civilian friends joined the Navy Team just because of their strong connection and love for the U.S. Navy.

Still, Polatty seeks out strong swimmers, too. One of those is Uustal, a civilian who holds swimming world records in “every stroke except the breast stroke.” The Jamestown resident says she gets it from her grandmother, who would consistently “beat the boys” in open-water swim races. As a young girl, Uustal remembers being pulled around the Bay by a kickboard attached to her grandmother’s waist. She jokes that her grandmother’s swimming genes made it to her. Although Uustal will not be able to get in the water this year because of prior engagements, she will still be integral to Team Navy’s success this year as a virtual swimmer, raising donations for Save The Bay and swimming in spirit.

Force, the veteran of the group and a founding member of Team Navy, has crossed the Bay 15 times and the 40th Swim will mark his 16th trip from Newport to Jamestown via the East Passage. He first got involved with the Swim to train for triathlons, until the Navy took him out of Rhode Island. A decade later, he moved back to Rhode Island in 2002, and has been doing the Swim ever since.

Many Team Navy swimmers, including Polatty and Force, are long-time Save The Bay swim veterans, but some on the team only recently discovered Save The Bay and The Swim. Lamay, a two-year Bay Swimmer, began open-water swimming during a mini-triathlon on the Navy base in 2013. Not long afterward, he and his family became aware of Save The Bay on a cold winter weekend when they discovered the Exploration Center & Aquarium in Newport. A few months later, Lamay was swimming in the Navy pool where Polatty was always on the lookout for strong swimmers. When Polatty approached the Newport resident to ask him to join the Navy Team, “he sounded like he wasn’t taking no for an answer,” Lamay said.

“He’s fast,” Uustal said. Lamay modestly denies the accusation.
The Swim is not an event to be missed, according to Polatty who, while stationed in Korea in 2008, did the swim

“virtually,” in a small pool at exactly the same time as swimmers back home in Rhode Island. “This is the one event every year that I truly look forward to…there are other swims, but this is the one that matters,” he said. The Virtual Swim option gives swimmers the opportunity to be connected to the swim and to raise funds to support Save The Bay’s efforts to protect Narragansett Bay, either by swimming somewhere else, at some other time, or even just “in spirit.”

“But it’s not just about the event; it’s what the event stands for. Raising money to clean the ocean,” Polatty said. “Most of the Navy Team spends its free time enjoying Narragansett Bay, and that’s the reason why this swim is so important to us.”

Uustal and Force all remember a time when swimming in the Bay was a less than pleasant experience. “It was really disheartening to see the poor conditions around the Bay. I just wanted to do some part in cleaning it up,” says Force.

The 40th annual Save The Bay Swim will be held on August 13, 2016. Nearly 500 swimmers and 100+ kayakers between the ages of 15 and 83+ annually participate in the 1.7-nautical-mile journey from Naval
Station Newport on Coaster’s Harbor Island across the East Passage to Jamestown’s Potter Cove. One of the most storied open-water swims in the United States, the Save The Bay Swim celebrates tremendous progress in cleaning up Narragansett Bay since its first official Swim in 1977 and the organization’s founding in 1970. In the early years of the Swim, swimmers often emerged from the water with oil and tar balls on their skin and swimsuits. Last year, swimmers reported seeing schools of menhaden beneath them as they swam.

For more information and to register for the Swim, as a swimmer or virtual swimmer, visit savebay.org/theswim. Pictured: Team Navy at 39th Annual Save The Bay Swim in 2015