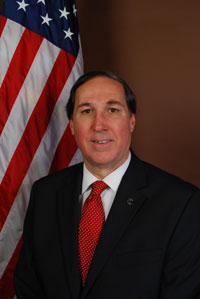 Representative Ray Gallison (District 69, Bristol and Portsmouth) is resigning his seat as a state representative in the House of Representatives amid a law enforcement probe, multiple source have confirmed.

Multiple State House sources confirmed that Gallison, a Bristol Democrat and the House Finance Committee Chairman , will give up his seat on Tuesday, May 3rd.

That have been reports that Representative Marvin Abney (D- 74 Newport, Middletown) is expected to take over as House Finance Committee Chairman.

UPDATE: Gallison’s seat in the House of Representatives will stay empty until November’s general election because he resigned too late in the session during an election year to require a special election.

What Others Are Saying

Raymond E. Gallison Jr. (D) has represented District 69, Bristol and Portsmouth, since he was first elected in November of 2000.

He has been serving as chairman of the House Committee on Finance, which reviews all matters that have a financial impact on the state, including the state budget, on which it holds months of public hearings. The Finance Committee ultimately recommends the budget to the entire House of Representatives for approval.

He is also been the co-chairman of the Joint Defense Economy Planning Commission. Before becoming the Finance chair, he served as the chairman of the House Veterans Affairs Committee. Additionally, he chaired the Commission to Study Construction of a New Veterans’ Home in Bristol, and served on the Commission to Study Homeless Veterans in Rhode Island and the Veterans’ Advisory Council for Senator Jack Reed.

A director of AEP and a self-employed attorney, Representative Gallison is a member of the Massachusetts and Bristol County Bar Associations. He served as Chief Marshal of the Bristol Fourth of July celebration in 2015. He also represents Rhode Island as a commissioner for the Northeast Forest Fire Protection Compact.

A 1970 graduate of La Salle Academy in Providence, he received his bachelor of arts degree from Rhode Island College in 1974 and his law degree in 1989 from University of Massachusetts Dartmouth. Representative Gallison was also a fellow at George Washington University’s Elliot School of International Affairs.

Representative Gallison lives in Bristol with his wife Diane. They have two sons, Timothy and Nathan.