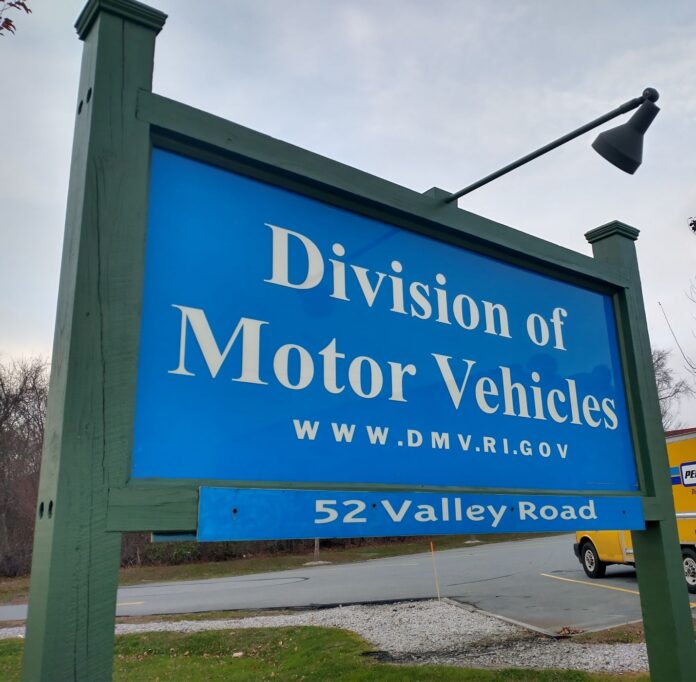 Since this is about a phone call to The Registry, you’re thinking it’s going to be bad, although perhaps not as bad as an actual visit.

And you’ll be wrong. Understandably, because you’re making assumptions about the person on the other end of the phone and not expecting that it was Margaret, a competent, warm, extroverted, and genuine Rhode Islander.

Margaret’s not her actual name. I’m changing that and being vague about a few other potentially identifying details, just in case this account might be taken the wrong way by her overseers at the Division of Motor Vehicles, within the Rhode Island Department of Revenue, aka The Registry.

I’m of the mind that our prejudices about government, and particularly The Registry, can be unfair and exaggerated, and that The Registry is not the state’s version of the detention camp at Guantanamo Bay. But just in case, we’ll try to protect Margaret’s identity.

I phoned The Registry’s main number because I had an arcane question about registering a car, an issue I couldn’t resolve on the DMV’s website. Margaret cleared up that matter with dispatch. She also volunteered some other pointers, identifying forms, which if not tended to in advance, might snarl things when I eventually appeared on the doorstep of the Middletown branch, The Registry’s closest outpost.

“By the way, you’ll need an appointment,” Margaret said, because Covid-19 protocols don’t allow “walk-ins.” She suggested I get started on setting that up right away, because the available slots fill up fast.

When I demurred, saying that maybe I should wait until  I had all the details worked out, Margaret grew a tad stern, in the manner of a mother whose adolescent son has offered a lame excuse about skipping breakfast.

“What’s the worst that can happen – that you’ll have to reschedule?” she said. “I wouldn’t put it off.”

As I was about to hang up, Margaret suddenly shifted gears.

“I love Newport,” she declared.

I said I was glad to hear that, wondering briefly how she knew that’s where I live, but remembering that it’s The Registry we’re talking about, and our addresses are the least of all of the things “They” know about us.

“We go to Newport all the time,” Margaret continued, adding: “But not this year. This has been an awful year.”

I agreed 2020 has been a terrible year, but not asking her why she thought so. I just assumed that she meant the deaths and disruptions caused by the Covid-19 pandemic. And maybe she also meant the dreadful presidential election campaign, a subject prudently avoided when talking to strangers and certainly those calling into The Registry.

In previous years, Margaret and her husband – who, truth be told, is something of a cheapskate – liked to browse antiques in showrooms once located in the former Armory building on Thames Street, a waterfront building now being converted into the National Sailing Hall of Fame, a switch Margaret’s not thrilled about.

But Margaret did say that in recent years, she sensed that the place may have had a mold problem, an issue she acknowledged that others may not have noticed. But since her bout with cancer a while back, Margaret’s been especially sensitive to mold, cigarette smoke and other pollutants.

I know, you’re thinking that I should have asked about her illness and congratulated her on her apparent recovery. But I didn’t want to appear too nosy, which itself is something of a test of someone’s Rhode Island bona fides.

Someone like me – not being born in Rhode Island and still learning the ropes after living here only for more than a half-century – might not want to seem to be too inquisitive. On the other hand, a true Rhode Islander might regard not showing concern about a life-threatening illness as being standoffish or worse.

Margaret didn’t seem put off. As our conversation continued, she said that she’s a native and lifelong Rhode Islander, living in a region that  Newporters sometimes refer to as “Upstate.”  She and her husband currently live in a Providence suburb.

Newport’s been a continuing delight for Margaret. One of her early visits was when she was 10. Her father drove her to the Navy base, where he took her picture with a warship in the background. It was something that could be done for free by a family with a limited budget.

Anyway, pilgrimages to Newport are still highlights for Margaret and her husband, whom she loves to pieces regardless of his penny-pinching ways. I never did learn – although I could have and maybe should have – asked how her husband’s thrift expresses itself. Do they avoid the tolls on the Newport-Pell Bridge on their southbound trips, and if so, do they favor the “new” Sakonnet River Bridge or the Mount Hope Bridge, both of which are free and each with its own visual advantages?

“Well, I’ve probably taken too much of your time,” Margaret said, something about which she and The Registry overlords might agree.

I thanked her for her help and wished her well on her next trip to Newport. She reminded me not to procrastinate in scheduling an in-person visit to the Middletown branch.

If I had been up to Margaret’s standards, I also would have thanked her for being who she is – not the kind of person you’d expect to find in a bureaucratic gulag  like The Registry.

Maybe we’ve been wrong about The Registry, at least Rhode Island’s version. Maybe it’s populated not by enhanced Gitmo interrogators bent on trickery and torture, but by personable neighbors, who are pleased both to steer us safely through the paperwork minefields and to remind how lucky we are to live in such a small and magical place.

Either way, Margaret would be – and is – a star.