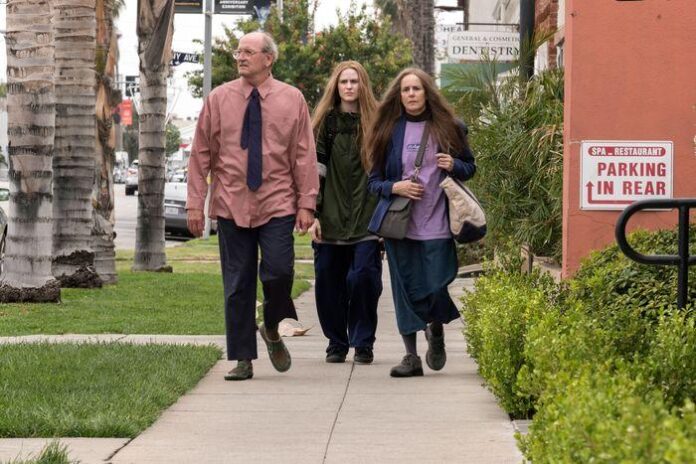 The world of Miranda July’s new film Kajillionaire is one of intense sensitivity filtered through a protagonist that doesn’t know how to process how she feels. A commitment to normalcy shown through a prism of oddness. The tone that results from this setup is a delicate one to balance, keeping a number of contradictory things in play at once: optimism and pessimism, truth and falsehood, even plot and character, all locked in a kind of see-sawing stasis. While watching, I found myself waiting for a hard-left turn that would tip the scales in one direction or the other, and though July uses that feeling to tease us, that turn never really comes— and her film is all the more interesting for it.

Old Dolio Dyne (Evan Rachel Wood) is the youngest of a family of scammers trying to drift through life in Los Angeles with as little friction as possible. She and her parents, Robert (Richard Jenkins) and Theresa (Debra Winger), live in an office building attached to a bubble factory— the waves of pink foam that seep through the walls twice a day mean they get it for cheap— and spend their days searching for their next successful con. Desperate to please her parents but already growing disillusioned with them, Old Dolio begins to seriously rethink her life when Melanie (Gina Rodriguez), a beautiful, outgoing stranger, joins their little crew.

Though it wears the mantle of a quirky heist movie, Kajillionaire is ultimately about family and all the complicated things wrapped up in that concept. The Dynes’ dysfunction is exaggerated but not exceptional; every family we come across is messy in its own way, and that mess inevitably creates some form of trauma. As Old Dolio works through the repercussions of an unusual childhood, we get moments that hint at how Melanie’s life was similarly shaped by her mother’s clinginess, and an extended focus on elderly loneliness shows how this trauma burdens the parent as well as the child. But, as a standout scene in a dying man’s home makes clear, the need for family runs deep in all of us. Learning to navigate that contradiction, July suggests, is tantamount to learning how to live.

The theme is an interesting one, but the creative way Kajillionaire explores it is what will find it an audience. Despite occasionally flirting with emotional heaviness, July keeps the film light, trusting in her talented performers to deliver the right mix of humor and sincerity for every scene. There’s joy in just watching them deliver again and again, but this approach is crucial to the film’s success, allowing the Dynes weird habits to be funny without dismissing them as jokes. Because we can enjoy the ridiculousness of their beliefs and still see them as serious influences on character development, scenes that could have been either absurd or touching are both at once. Movies like this are refreshingly tough to predict, and while viewers like me will certainly admire the craftwork, Kajillionaire is just as rewarding for those more inclined to be caught up in the experience.