Twelve weeks ago, when Suzi Van Ness turned her picture window into a public billboard, she hoped that the messages she displayed would amuse, inspire and challenge the random audience that happened to pass by her Newport home.

Most of the posters have featured a quotation: the words of saints, geniuses, coaches, chefs and poets she’s plucked from cyberspace.  And while none have dealt directly with Covid-19, they are offered as an antidote to the fear, isolation and disruption unleashed by the pandemic.

And if a medical cure to the novel coronavirus so far has eluded the nation’s and the world’s scientists, Van Ness’ artistic/literary countermeasures seem to be having their intended effect, both on the viewers as well as Van Ness.

“A woman was walking by with her dog,” Van Ness said, when the display featured a homily attributed to Mark Twain – “Never regret anything that made you smile.” The woman said she laughed, reminded of her college years, when mischief was part of the unofficial curriculum.

Now that the weather allows Van Ness to go outside and tend the gardens at her and her husband David’s home at 65 Carroll Ave., she gets to chat with some of the observers, and, when the hedges and plantings hide her from view, to hear their reactions.

“Oh, that’s really different,” someone commented to a companion as they walked by, which Van Ness interpreted as a positive review.

A “young” man in his 20s, whom she had never met previously, stopped three times to tell her that he had read each one.

“This project continues to be a great deal of fun,” Van Ness told me the other day on the phone. “I love researching the quotations I’m finding, and I’m surprised who said them. “

She is surprised, too, by her own reactions.

One recent posting was attributed to the late celebrity chef and author, Anthony Bourdain – “Barbeque may not be the road to world peace. But it’s a start.”

Van Ness is enthusiastic about food – she was tending a batch  of “salted oatmeal chocolate-chunk cookies” as we talked – and she recalls splattering tiny bits and lines of paint over the Bourdain piece, which she always does when finishing the posters; but she worried whether she’d overdone it this time.

On second thought, she decide that “it looked like a food fight,” in keeping with Bourdain’s enthusiastic approach to his work.

Van Ness is introspective – even critical – of what she chooses to display every Friday, and one particular phrase made her uncomfortable soon after its debut.

The message had seemed inspirational: “Don’t dream your life; live your dreams.”

As she thought about it, she wondered whether that one might have an unintended effect, at least with some pedestrians or motorists.

“There are so many people negatively impacted” by the virus and its economic stress, she thought to herself. “They don’t have the luxury of ‘living their dreams.’ Who am I to say: ‘live your dream?’ “

The poster had been up only an hour early in the morning, when Van Ness snatched it from the window, and replaced it with another one, which she could do quickly, since she is often several posters ahead of her self-imposed once-a-week schedule.

A retired art teacher, Van Ness has a studio on the third floor of their home in the Fifth Ward neighborhood, and that allows her to create them in stages, leaving time for paint to dry and return to it the next day, without disrupting the household’s routine. Each one takes a total of one-and-a-half to two hours to complete.

The posters, after their one week of fame, may have a second life. Van Ness is on the board of Lucy’s Hearth, a shelter in Middletown for families and women who are homeless, and she’s wonders if they can be used in fund-raising events, which were thrown off kilter by the pandemic’s restrictions.

I asked whether she has a favorite, among the dozen she’s displayed so far.

One that seems to reflect the spirt of her project is a quotation attributed to Mother Teresa, the Roman Catholic nun whose work with the poor in India and other countries led to her being awarded the Nobel Peace Prize in 1979 and to her declaration as a saint four years ago.

The saying, “Never be so busy as not to think of others,” encourages people to take the focus off themselves and take notice of others,” Van Ness says, and it’s often something that just takes a moment, perhaps a “thank-you” to a grocery clerk or even just a smile.

“There’s always something we can do,” Van Ness says. 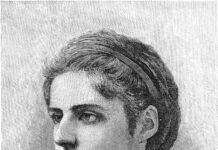 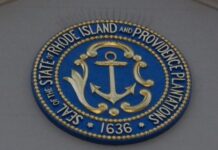 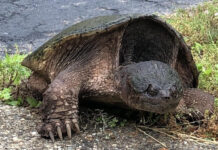 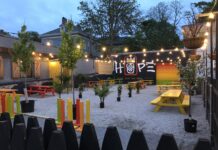