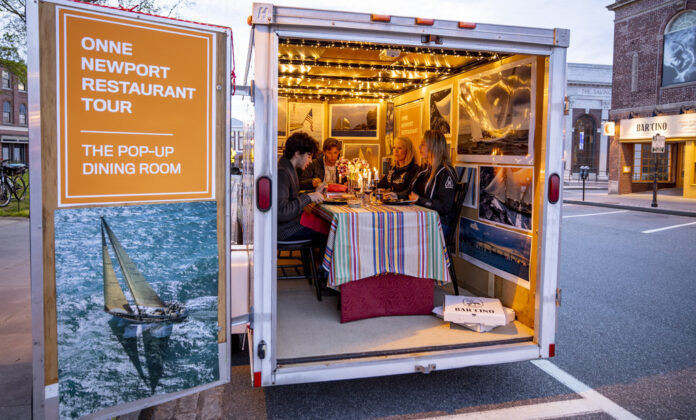 Over the last 72 hours, Newport social media has been buzzing about The Pop-up Dining Room, a mobile dinner space launched by renowned nautical photographer Onne van der Wal and his family.  The van der Wals’ innovative pop-up idea was borne out of a desire to support their favorite local restaurants during the pandemic as well as a desire to experience dining out again.

Introducing: The Pop-Up Dining Room. We decided to support our local Newport Restaurants by turning my work trailer into a mobile dining room. First stop – The Clarke Cooke House

The distance dining car made its first appearance at Bannister’s Wharf on Saturday night, where the van der Wals ordered dinner from the Clarke Cooke House. “We asked David Ray, the owner of Clarke Cooke House, ‘hey do you mind if we park outside?’ and he told us to go for it,” van der Wal said.

The following night, the family parked in Washington Square and enjoyed a candlelit Sunday dinner from Bar ‘Cino and Stoneacre Brasserie, much to the delight of the restaurants’ owners and passersby.

Thank you for distance dining with us! Way to support in style! ✨The most creative and innovative covid solution yet. Uniting our arts: culinary & photography 👨🏻‍🍳🧑🏻‍🎨 . . #supoortlocal #sundaysupper #covidsolutions #artsupporting #eatlocal #foodie #6ft

“The restaurant owners love it,” van der Wal said. “People walking or driving by stopped to tell us they love the idea and asked about how they can get involved.”

In just a few short days, the mobile dining spot has already generated many requests for appearances, with various local and out-of-town restaurant owners reaching out to invite the van der Wals to park near them for their next dinner. The family plans to distance dine with Pasta Beach tomorrow night, and also plans to visit TSK, Scales & Shells and restaurants outside Newport in the near future.

“We’re considering going to Providence,” van der Waal said. “We’ve already had some restaurants there that reached out. We even had someone ask if they could rent it for a birthday party!”

Van der Wal said the dining room was originally a trailer the family once used for hauling large prints and panels during boat shows along the East Coast. It had been sitting idle in storage for years when the pandemic broke out and their daughter Read, a New York resident, and son Adrian, a student at Northeastern, returned to the family home in Newport County to wait out the pandemic with their parents. The family has been social distancing together for approximately two months.

“We’ve had amazing family time, van der Wal said. “But you get tired of cooking and doing dishes every day. We wanted a way we could get out of the house and support the restaurants we really love. You can get take-away food, but often it’s cold by the time you get it home.”

The idea to reimagine the trailer as a mobile room the family could use to “dine out” at their favorite restaurants came from van der Wal’s wife Tenley, and transforming it into a furnished room became a project for the whole family. “Tenley had this vision to get all the boat show stuff out of there and put in a carpet, a table, candles, and original photography on the walls,” he said. “We repurposed a large display table from the gallery, gathered some dining chairs, plates, glasses, and candalabras. Read contributed some battery-operated twinkle lights we strung up on the ceiling,” he said.

Reflecting on the past months and looking ahead to what a post-pandemic reality might look like in Newport and elsewhere, van der Wal said he’s keeping a positive, hopeful mindset. “As far as the gallery goes, we’ve become very active online. Virtual slideshows on Zoom have been keeping me very busy,” he said. “Some positive things have happened during this time. More family time, more time outside, less cars, less planes. We’re all learning a lot from this thing.”