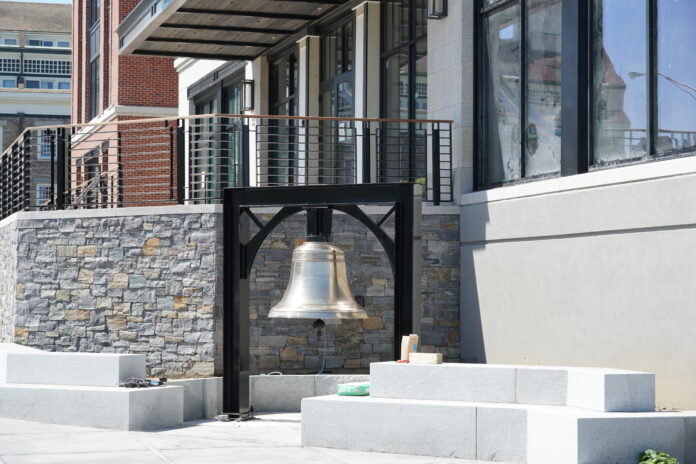 The Hammetts Bell, manufactured more than 150 years ago by one of the storied bell manufacturers of the last two centuries, will become another historic point of interest along Newport’s waterfront, at the site of Newport’s newest hotel, Hammetts Wharf.

“This is very exciting,” said Colin Kane, founding partner at Perigrine Group, LLC and co-owner of Hammetts Wharf. The bell was installed earlier today at the corner of America’s Cup Avenue and Commercial Wharf on the hotel’s property.

Kane describes it as another “stopping point,” where visitors and locals alike can “pause” and enjoy the views and culture of Newport’s waterfront. “For a long time, we wanted to have another stopping point along America’s Cup, another public landing place.” He said the hotel’s deck, a widened America’s Cup Avenue in front of the hotel, and the bell gives “people a place to pause.”

Why a bell? Kane said the hotel’s logo incorporates a bell, and initially the ownership was hoping to replicate the bell of the U.S.S. Rhode Island battleship that is in the state house. Unable to do that, they found what they are now calling Hammett’s Bell, significant because of its association with ships and the sea.

Kane says The Hammetts Bell has its original clapper and that it will be rung on special occasions.

The bell has been installed about a month before the hotel will open. Originally anticipating a Memorial Day weekend opening, Kane said with the coronavirus and restrictions, there was no rush. Last week, he said, the 84-room boutique hotel received its temporary certificate of occupancy, expecting its final certificate of occupancy by mid-June. It is targeting its opening for June 26, Kane said.

Besides the hotel, the $9 million project will include a waterfront restaurant, and retail space fronting America’s Cup Avenue. The project will also create permanent public waterfront access.

Like many events that had been booked, and now postponed or canceled, the opening of the restaurant and retail shops remains on hold.

Here is a brief history of the bell, compiled by Hammett’s Wharf Hotel from internet sites:

“Although we do not know where it was originally installed (likely a church steeple), the Hammetts Bell was manufactured by Vanduzen & Tift factory in its Buckeye Bell Foundry in Cincinnati, Ohio 1872.

“The Vanduzen factory has its roots in a foundry founded by Thomas Hedderly in Nottingham, England in 1780.  His son and grandson emigrated to Philadelphia, where they operated the business until Henry Hedderly sold it to George Hanks.

“George Washington Coffin acquired the business from Hanks and founded the Buckeye Bell Foundry in 1837 in Cincinnati.  The foundry created exceptionally ornate bells for the time, and during the Civil War produced cannons to support the Union war effort.

“W.A. Van Duzen was apprenticed to George Coffin, and by 1865 he and his partner, Mr. Tift, bought the company from Mr. Coffin.  Vanduzen changed his last name along the way to be one word instead of two and changed the shape of the bells and dropped the ornate work. The sound of the Vanduzen bells was much improved over the Coffin bells because of a change in the shape of the bells and the provision of a unique mounting disc with a large hole in the top of the bell to hold the bell to the yoke.

“Vanduzen made thousands of bells, and the name of the foundry changed several times as different family members ran it in different generations.  The name Vanduzen & Tift was used from 1865 to 1894.  The partners owned the company until 1894, when Vanduzen became the sole owner.

“When the firm closed in the early 1950’s, it was called E. W. Vanduzen.  The company issued a warranty on bells weighing more than 120 pounds not to crack for 10 years from the date of sale, and has the distinction of founding the largest bell ever cast in America and the largest bell mounted as a regular swinging church bell in the world.  With its mounting, the bell weighs about 35,000 pounds and hangs in the tower of St Francis de Salles Roman Catholic Church in Cincinnati, OH.

What’s Up Newp’s Ryan Belmore captured the following photos of the installation on Thursday morning. 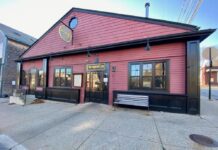 Survey | COVID-19: How well are you doing as an individual, as a business owner?