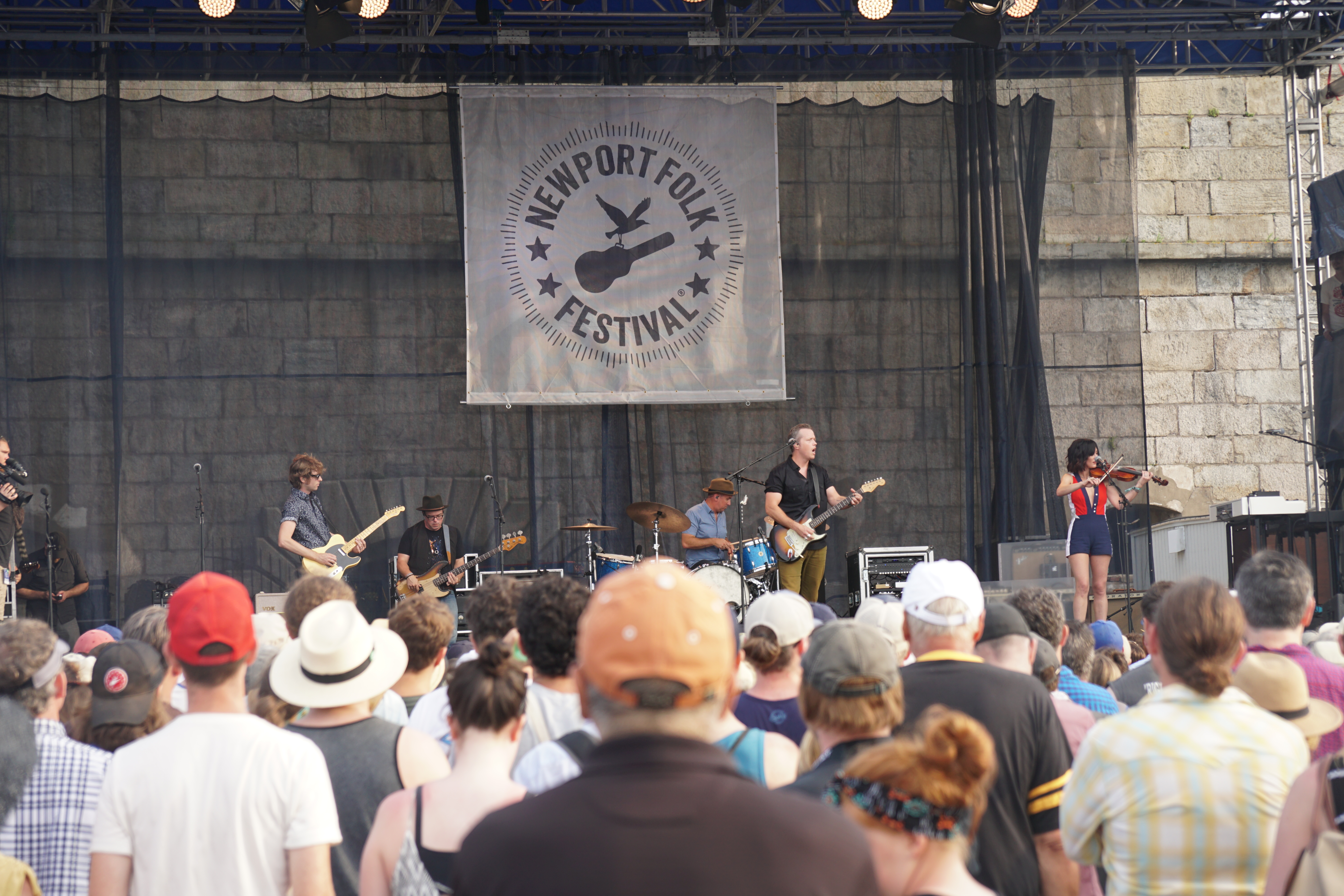 Governor Raimondo made the news official during her daily press briefing this afternoon when she announced that she doesn’t see it possible in any way to hold large events this summer.

The Governor said in her announcement on large events that concerts, festivals, parades, large gatherings, weddings, and any event with more than 50 people cannot happen this summer. “It’s just not safe,” she said.

The Newport Festivals Foundation says, that together with the Governor, it concluded that it would be too risky in order to have gatherings the size of Newport Folk Festival and Newport Jazz Festival this summer.

“As devastating as it is to write these words, it’s balanced with a renewed sense of, well, HOPE,” Executive Producer, Jay Sweet wrote to What’s Up Newp. “It’s Rhode Island’s motto for good reason, and it’s also the feeling our festival family, constantly exudes when we come together in good times and perhaps more importantly, in difficult times as well. This community is truly unlike any other in music, and I believe we can emerge from this adversity stronger and more connected than ever before.”

With daily capacities of 10,000 and many other small events tied to their respective weekends, Newport Folk Festival and Newport Jazz Festival are arguably the biggest two events and weekends to happen in the state on an annual basis.

“It’s so disheartening  to hear each week that another major Newport event is cancelled. So much time and effort goes into planning large events like this and the economic loss to our community businesses and to the city and state will be enormous,” Evan Smith, President & CEO of Discover Newport told What’s Up Newp on Wednesday.

The cancellation of Newport Folk and Newport Jazz comes just one day after the Newport Music Festival, scheduled for July 4 – 25, announced that it is not proceeding as planned and is working on a “floating season”. The festival’s join more than two dozen other large and popular events that have had to cancel this summer.

“The Newport Folk and Jazz Festivals are iconic events and the cancellation is heartbreaking. This sad news reverberates through the music community in Newport and around the world, Newport Mayor Jamie Bova told What’s Up Newp. “The loss of the substantial economic contribution from the festivals is yet another way the COVID-19 pandemic has impacted us locally. The Newport Festival Foundation has a strong history of giving back and being responsible and caring community partners; I know this decision comes from a place of concern for the safety of the artists, fans, and local community. I look forward to the Festivals coming back in the future, even stronger than before.”

The impact of this cancellation will be felt deeply throughout the community as Newport Festivals Foundation, a non-profit 501(c)3 that produces the Newport Folk Festival and Newport Jazz Festival, relies on the money it makes each year at the festivals in order to carry out its work.

Because of the support their Folk and Jazz Festivals fans, the Foundation tells What’s Up Newp that it has been able to support music programs in our own backyard of Newport and all across America. The foundation has funded music programs for remote communities in Alaska, donated instruments to schools in Puerto Rico that were decimated after Hurricane Maria and brought jazz education to schools that have no music programs due to funding cuts.

On April 17th, Newport Festival Foundation told Pollstar that it had “already given away low six figures”.

Newport Folk Festival continued to roll out their lineup for 2020 because each artist announcement was providing financial relief to nonprofit organizations of the artists choice, some chose to donate to support the Newport Festivals musician Relief Fund. Each and every of the 45 artists that had been announced for this summer’s Newport Folk Festival, had donated to a cause with an artist donation. See the list here.

According to the Foundation, 2020 ticket holders have the following options:

The Foundation is encouraging those who don’t have tickets to consider making a tax-deductible donation to help them continue the festivals, support year-round music education initiatives, and provide grants to artists in need.

The Newport Folk Festival and Newport Jazz Festival also has a significant economic impact in Newport and across Rhode Island. In 2018, the two festivals had an overall economic impact estimate of $58.1 million, according to a 2018 Newport Festivals Foundation Economic Impact Study conducted by Fourth Economy Consulting through a partnership between the Newport Festivals Foundation and Connect Greater Newport, an initiative of the Newport County Chamber of Commerce(RI).

The figure is compromised of direct, indirect, and induced effects resulting from the festivals. Fourth Economy estimates a direct economic effect in Rhode Island of $32 million that resulted from attendee and festival expenditures on food and beverage, shopping, entertainment (not including Festival tickets), lodging, transportation, and other miscellaneous expenses.

During the Governor’s press briefing, What’s Up Newp asked, “The Newport Folk Festival and Newport Jazz Festival result in an economic impact of $58 million annually for Rhode Island. How can Rhode Island and Rhode Islanders support cancelled events to make sure they survive to see next year?”

The Governor responded by saying ” Such a good question, Ryan and I have been in close contact with Jay Sweet who runs the Folk and Jazz festival and delivered the tough news to him that they are going to have to cancel this year. He will be in touch with his followers around how you can help, as will every festival that cancels. I would encourage everybody, if you can help them out. So I’m sure that they’ll be asking you to donate your ticket back, if you can do that it would be great if you could. We’re certainly going to look at ways that we can help them with some of our stimulus money. I’m going to have to take a very hard look at all of the tourism industry and figure out what we can do to help and I would ask every Rhode Islander to help in any way that you can. If you can make a donation, almost every one of these festivals has a foundation, please if you’re a corporation ,if you’re a wealthy individual, if you care about the arts make a donation if you can. If you bought a ticket and donate it back, do that if you can.”

Drive-By Truckers, Puss n’ Boots, Deer Tick, Nathaniel Rateliff, Randy Newman, Son Volt, Sylvan Esso, and The National were among the dozens of artists that had been scheduled to perform at the 2020 Newport Folk Festival, scheduled for July 31 – August 2. Newport Folk Festival had sold out each day within minutes of putting tickets on sale back on December 4, 2019.

Norah Jones, Wynton Marsalis, Diana Krall, and Robert Glasper, were among the artists who had been announced to perform at the 2020 Newport Jazz Festival, scheduled for August 7-9.

“Although we won’t be able to gather at the Fort this summer, rest assured we have invited ALL the announced artists to join us next year,” says Sweet. “In the meantime, we promise we will all commune one way or another on our festival weekend. As always, we have some secret surprises in store as well, so stay tuned for more details in the coming weeks. Until then, be present, be kind, be open, be together and stay strong.”

This is the dreaded post I can’t believe I have to write. I’m sure this comes as no surprise but in accordance with Governor Gina Raimondo’s wishes and the safety of us all, both our festivals are officially canceled. As devastating as it is to write these words, it’s balanced with a renewed sense of, well, HOPE. It’s Rhode Island’s motto for good reason, and it’s also the feeling our festival family, constantly exudes when we come together in good times and perhaps more importantly, in difficult times as well. This community is truly unlike any other in music, and I believe we can emerge from this adversity stronger and more connected than ever before. Although we won’t be able to gather at the Fort this summer, rest assured we have invited ALL the announced and “unannounced” artists to join us next year. In the meantime, we promise we will all commune one way or another on our festival weekend. Until then we have some secret surprises in store as well, so stay tuned for more details in the coming weeks. Stay Strong and Folk On. To read my entire letter, hit the link in bio.

This story is developing, What’s Up Newp will provide more reaction and information shortly.