Newport City Council will host their next Regular Council Meeting on Wednesday, February 26th at 6:30 pm at Newport City Hall.

CITY OF NEWPORT
DOCKET OF THE COUNCIL MEETING
FEBRUARY 26, 2020

THE MEETING WILL BE HELD IN THE COUNCIL CHAMBERS
43 BROADWAY, NEWPORT, RI 02840

The following items of business, filed with the City Clerk under the Rules of the Council, will come before the Council at its regular meeting to be held on February 26, 2020 at 6:30 p.m.
PLEDGE OF ALLEGIANCE TO THE FLAG

Suggested Action: ~Proclamation honoring Kathleen M. Silvia~ CITIZENS’ FORUM: (Speakers must sign in with the City Clerk) The Citizens’ Forum period shall be no longer than fifteen minutes, and citizens may address the Council on one subject only and for no longer than three minutes. Issues to be discussed shall not include matters to be considered or discussed as part of the regular Council agenda and must be related to substantive city business. No comments regarding personnel or job performance are allowed.
COUNCIL LIAISON UPDATES 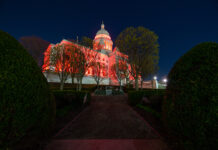