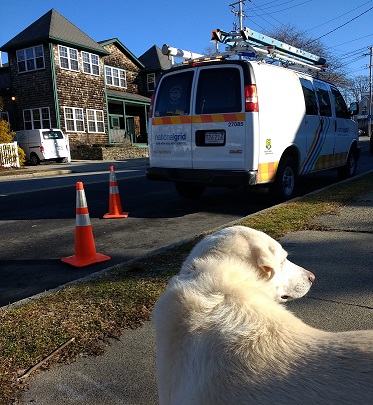 A YEAR AGO TODAY, Jan. 21, 2019, on the coldest day of the winter, natural gas was cut to thousands of people in Newport and Middletown. It was a crisis for lots of businesses, and many residents were forced from their homes, some not returning until service was restored a number of days later.

For my wife and I, plus our cat and dog, in our tiny house in Newport’s fabled Fifth Ward neighborhood, where you can hear the ocean but not see it, the crisis would turn out to be almost forgettable, except for the Fear.

Given single digit temperatures when the gas went off, would our pipes freeze and burst, flooding the house? We did have electricity, but would the space heaters we were using overwhelm the house’s ancient wires and start a fire?

There was so much we didn’t know about our own home, even though we’d lived in it for 45 years.

This was especially embarrassing for me. I mean, isn’t  “The Man” of the house supposed to know where to find the valve that shuts off the water, to say nothing of how to turn it off should He  stumble across it? Isn’t The Man supposed to know which lever shuts off the gas line feeding the “boiler” (also-known-as the “furnace?”) Which electric outlets are controlled by which circuit breakers? What exactly is an “amp?”

And of all the unknowns, never to be spoken about – not a word in the river of news that gushed through our computers, tablets, TV and stereo speakers – was anything to be said about the possibility that somebody, somewhere, might do something he wasn’t supposed to, or forget to do something, or drop his flashlight, so that in one terrifying moment our house, and every man, woman, dog and cat in it, would be blown to smithereens.

After all, something already had gone terribly wrong.

OUR PART OF THE CRISIS began, as usual, with denial.

Yes, we heard something on the radio about some homes in Newport and Middletown that had lost natural gas service. Too bad for them, hope they’ll be okay, but that was happening to other people, faraway, because tragedies always happen somewhere else.

In addition, and I confess we were a little smug about this: we’d recently been visited by a furnace repair crew to tune up our space-age “boiler,” the kind that’s the size of a dorm room refrigerator that’s bolted to the cellar wall. It was the first time in five years we’d had that done, even though everyone knows you’re supposed to have it looked at once a year. Actually, when the crew showed up all the way from West Warwick, things DID have to be done, a couple of gizmos replaced, settings reset.

The bill was $900, fair punishment for being irresponsible about maintenance. Still, while other people’s gas was shut off far, far, far away in Middletown, we’d were in good shape because we’d just paid 900-bucks to get everything running tip-top at our corner of the Fifth Ward Kingdom.

Then I happened to touch one of the pipes, which carries hot water to the radiators (our home has something referred to as a “forced hot water system.”)

It was stone cold.

So was the pipe next to it. I decided to visit the “boiler.” But the “boiler” seemed to have taken the afternoon off, except for flashing a digital display, some numbers preceded by an “E.” Even an ignorant Man knows that “E” is for Error.

So we were part of the crisis. Can you believe it?

THERE WAS ENOUGH HOT WATER in the “forced hot water system” to keep things somewhat “warm” overnight. I told my wife that, as The Man, I had a plan. I had looked up the opening time for the Home Depot store in Middletown, and I’d get there an entire hour before the doors opened, should there be a crowd looking to buy some space heaters.

Sure enough, when I arrived the store’s parking lot was empty, I’d outsmarted the rest of the city. But when the store opened, every space heater was gone. Turns out there the smart ones had put on the rush the day before. New bright idea: drive to Seekonk. Nobody on Aquidneck Island would dream of crossing the Massachusetts state line. I bought the last two space heaters, one of which was in a box with its lid torn off.

By the time I got back to Newport, our next door neighbor had delivered four space heaters, which he didn’t need, given that he had oil heat. Keep ‘em as long as you need them, he said. And come over if you want a hot shower.

THIS WAS LESSON TWO. The first lesson was that a crisis you hear about in the news can land on your doorstep. The second was that when it does,  you need help; it takes a village; no man is an island, even when he lives on one.

In our case, friends were calling to invite us – dog, cat, the whole household – to move in with them for “the duration.” As far away as Providence.

We were friends with a couple, which included an actual Man who knew all about things like how to figure out which outlet went with which circuit breaker, an important fact, because you should only use one space heater per “circuit.” He also knew about the gas shut off, the water shut off.

In addition, we can’t say enough about National Grid.

I know; I know. We’re supposed to be really, REALLY MAD, OUTRAGED AND DISGUSTED with National Grid, the robber baron utility that sends the ever-rising bills, and which above all, is supposed to keep the gas swooshing through our pipes and into the “boiler,” and on that, they absolutely didn’t deliver.

Indeed, a state investigation laid part of the blame for the outage on National Grid, along with a transmission company.

But at our little outpost in the Fifth Ward, National Grid continues to be held in high esteem.

Lots of government agencies and companies have disaster plans, just in case. I have no idea what National Grid had in advance, given that it certainly didn’t plan to turn off gas on the coldest day of the winter. Such terrible PR. Plus, you’re not selling a heck of a lot of gas.

But whoever was in charge of National Grid’s what-to-do-if-you-shut-down-a-city’s- gas, she or he knew what to do: go gangbusters. Set up a public outreach center in one of the big hotels in Newport, where you hand out free space heaters like candy (if only I’d paid attention). Bring in your cousin robber baron utility crews from as far away as New Jersey, maybe even farther than that. And instead of letting them run amok all over Newport County, you put somebody in charge and coordinate this huge army with something that civilian bill-payers regard as precision, mixed with common sense.

There’s more. When you called National Grid on the phone, somebody actually answered on the first ring, and they were – get this – cheerful. What’s more, they knew stuff. Where the shelters were. Want to spend a night or two in a hotel: it’s on them. Hungry, it’s on us.

Most of all, National Grid had a plan to “re-pressurize” the gas lines without blowing up the city. First, crews would visit every house to make sure every gas line was shut off. Once every place was shut off – that would be EVERY place – then, gas could be phased back in. A crew would return to EVERY house, and make sure the gas was turned on properly. We were visited three times – once for a shutoff, once for a “welfare check,”, and finally to turn on the gas  – properly.

If you wanted to speak to someone in person and not go all the way to the big hotel? National Grid was posting trucks and vans in many neighborhoods.

The Gridswoman was happy to see the dog, and she climbed out to pat her. She missed her dog, which was back at her home. Turns out, if it’s a crisis, you’re not supposed to bring your dog too. She said that crews “soon” would be going house to house to turn everyone’s gas on.

ON A SATURDAY, AT 4:15 P.M., a crew appeared at our door, and even though they were from New Jersey, they knew the way around our cellar and just like that, they found the “boiler.” And that night, the heat was back on. And our house hadn’t been blown to smithereens after all.

Across Rhode Island, more than 4,000 people are homeless every night. They can’t get their heat turned on, because they don’t have “boilers” or “forced hot water systems,” part of the price of not having a home. Their crisis is constant and doesn’t end on the fifth day or the seventh. In Paradise, California, thousands of people saw that their houses had burned to the ground – for good. Wildfires now are sweeping through parts of Australia. Earthquakes in Puerto Rico left people sleeping outdoors, afraid of the next one. All over the world, poverty, violence, wars have taken away people’s homes, and a lot of countries, including ours, are turning them away.

Here in the Fifth Ward in Newport, where we can’t see the ocean but can hear it, we got a tiny taste of what it’s like when the news demon lands on your doorstep. We got just a little whiff of news terror.  We survived nicely, with help from our friends and even a utility, which, if it let the pressure drop was pretty sure-footed when it came to knowing what to do next.

My wish: That we won’t forget the next time the news comes on about the storm, the quake, the inferno that’s happening somewhere else far away or just around the block, and what that means to actual people whose luck has just run out – maybe for five days, maybe for good. 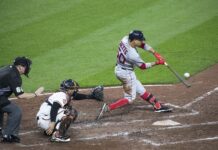 Gerry Goldstein: Mookie will make the most of it