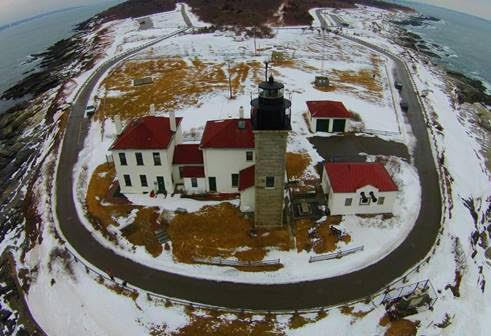 In a press release sent today, the Rhode Island Department of Environmental Management (DEM) announced that the perimeter loop road surrounding the lighthouse at Beavertail State Park in Jamestown will be closed to vehicular traffic starting Monday, February 3. The lighthouse and surrounding area will remain accessible to pedestrians.

The closure is being enacted to protect public safety at this waterfront park located at the southernmost tip of Jamestown. Residual damage from Superstorm Sandy along with erosion and storm surge intensified by climate change-driven sea level rise have caused dangerous washouts along the perimeter road and the surrounding pedestrian path at the iconic Jamestown property.

“DEM’s strategic study on modernizing state parks and beaches notes that Rhode Island must do more to make our special places more resilient to the effects of climate change, and this project does just that,” said DEM Director Janet Coit. “It also underscores Governor Raimondo’s commitment to addressing climate change and investing in our natural assets as shown by her proposed $64 million Beach, Clean Water, and Green Bond, now under consideration by the General Assembly. First and foremost, our work at iconic Beavertail State Park is about protecting public safety. I’m pleased that pedestrian visitors will continue to have access to Beavertail’s spectacular vistas, which rival those of any coastal attraction in New England.”

“The CRMC is encouraged by RIDEM’s decision to close the road around Beavertail lighthouse in the interest of public safety,” said Coastal Resources Management Council (CRMC) Executive Director Grover Fugate. “That area has increasingly been subject to erosion and washouts from storm surge, flooding, and wind during Sandy and other major storm events as a result of climate change. People will still be able to access the shore, but will do so in a safer manner.”

With the closure, vehicle traffic inside the park on Beavertail Road will be redirected to the interior loop road located just north of the lighthouse and will no longer be allowed to travel on the outer loop portion of the road that circles the Beavertail Lighthouse and Museum. Posts and chains have been installed at the closure area, along with signage directing pedestrian traffic to continue to access the loop. DEM will be developing plans over the next several months to improve pedestrian and handicap parking and access to the closed loop portion of Beavertail Road. DEM will explore longer-term strategies to manage the impacts of the inevitable continued erosion at this site, with input from the Beavertail Advisory Committee, Town of Jamestown, CRMC, US Coast Guard (USCG), and other partners.

Coinciding with but separate from the road closure, the USCG will begin a lead remediation project at the Beavertail Light Station on February 5. The Light Station and buildings inside the perimeter wooden fence belong to the USCG. Both the light and fog signal are active navigation aids and maintained by the USCG.  Beginning this month, almost 5,000 square feet of soil in the vicinity of the Beavertail Lighthouse Museum, the keeper’s dwelling, and the fog signal building will be excavated as part of this project, which is expected to be completed by February 20. In addition to protecting public safety due to erosion, the closure of the loop road will allow the contractor performing the remediation to work without interference from vehicle traffic.

Beavertail State Park offers some of the most beautiful vistas along the New England coastline and is a popular destination for sightseeing, saltwater fishing, hiking, and marine education. The RI Park Naturalist program runs the Beavertail Aquarium, which is housed in what was the foghorn house for the Beavertail Lighthouse. The tanks in the aquarium are displayed to simulate the environment of the Jamestown shoreline. The non-profit Beavertail Lighthouse Museum Association manages the museum, which features a collection of information, artifacts, and conversation about the history and site of the third-oldest lighthouse in North America. Rhode Island’s public parks, beaches, nature preserves, campsites, and bike paths attract more than 9 million Rhode Islanders and tourists a year. They also add around $315 million to the economy, generating nearly $40 million in state and local taxes and supporting nearly 4,000 jobs a year.