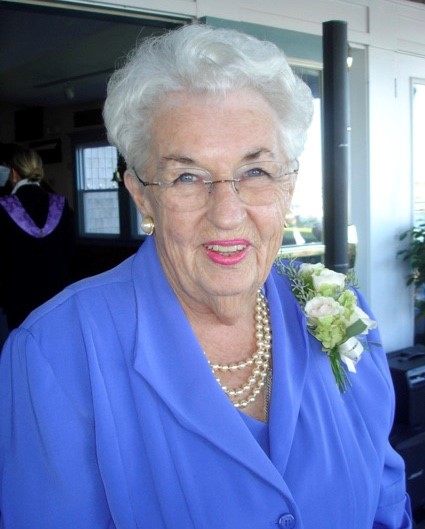 Elise G. LaParle, age 89 of Newport passed away on Thursday, August 22, 2019 with her family by her side. She was the wife of the late Eugene F. LaParle for 53 years. Elise was born in Newport RI to T. Raymond Kelly and A. Theresa Tilley Kelly. Elise was a lifelong islander proudly born and raised in the point section of Newport.

Surviving Elise are four of her six children: Eugene LaParle and wife Paulette; Theresa Watson and husband Charles; Peter LaParle; Elise LaParle Garcia and husband Henry; and daughter in law Linda LaParle. She is also survived by 11 grandchildren, 5 great grandchildren, and her sister Corinne Peckham. In addition to her husband, she was predeceased by her two sons Levie LaParle and Paul LaParle. She is also predeceased by her two brothers Thomas Kelly and Edward Kelly.

Elise graduated from Roger’s High School in 1949 and Dean Junior College in 1951. After graduation she was employed as an executive secretary at the law firm of Cornelius C. Moore. She then took a break from her career to stay at home and raise her six children. Upon return to work she was employed as the Assistant to the Academic Dean at Vernon Court Junior College, Assistant to the Dean of Admissions at Salve Regina University, and secretary for the Newport School Department. She ended her career with the job she most enjoyed, a tour guide at Hammersmith Farm. There she was able to share her love of Newport, history, and the fascination and knowledge of the Kennedy family. As a teen she worked in her godmother’s laundry and laundered the clothes of Jacqueline Kennedy Onassis. It was at this time her interest in the debutant began.

In 1953 she married her husband Eugene F. LaParle. Together they had six children. It was as a mother that Elise truly shined. Her children kept life interesting and busy. Elise loved learning of all types and she was her children’s first teacher. She never met a book she didn’t want to add to her library and her favorite type of book was a reference book, to check facts and find information she did not know. Her artistic flair was captured in many ways – gardening, painting, needlework, and rug hooking. Elise was a collector. In addition to her book collection, one of her earliest collections was an antique toy exhibit displayed at Tudor Hall, the home of Clement C. Moore. She enjoyed her collection of Blue Willow China and loved sharing the famous Blue Willow fable with her grandchildren. She loved games of every kind including Bridge, Mah Jong, Rummy and all board games. She was known as Nana to her grandchildren, a role she treasured and held close to her heart. A day with Nana was a day filled with fun, learning, pampering and adventure. Elise was blessed with many lifelong friends.

Elise loved her community and was active in many organizations to include The Preservation Society of Newport, The Newport Historical Society, RHS Alumni Association, Dean College Alumni Association, Viking Bridge Club, Little Rhode Thrummers, and The Mount Vernon Ladies Association.

Heartfelt thanks and appreciation to the staff and caregivers at Forest Farm Assisted Living and Village House Nursing’s Center for the loving care and support.

Calling hours are Sunday, August 25 from 4:00-7:00 pm in the Memorial Funeral Home, 375 Broadway, Newport. Funeral services will be held Monday, August 26, 2019 at 9:00 am from the funeral home, followed by a Mass of Christian Burial for Elise will be held at 10:00am in St. Mary’s Church, 12 Williams Street, Newport. Burial will immediately follow at St. Columba Cemetery, 465 Brown’s Lane, Middletown.