Boats designed to the Universal Rule weren’t built to be sailed tentatively, or by tentative sailors. The smaller classes, in particular, were narrow with minimal freeboard and required determined, fearless sailors to get the most out of the design, especially in extreme conditions.

Day 1 of the 165th edition of North America’s oldest sailing event—the New York Yacht Club’s Annual Regatta—featured exactly that, a southerly breeze that built to 20-plus knots and a bellicose offshore swell that topped out at 6 to 8 feet. Numerous boats decided against starting today, saving their figurative bullets for the weekend series, while a handful of others dropped out before the the finish.

Peter McClennen’s R Class yacht Gamecock may be closing in on 100 years old, but she’s no shrinking violet. McClennen and his team pushed his Herreshoff design, which was originally built for a commodore of the New York Yacht Club, all the way around the 19-mile circumnavigation of Conanicut Island and were rewarded with an overall win in the Classics Division.

“We had incredible conditions,” said McClennen. “We beat our time last year by an hour. We hit speeds faster than we’ve ever hit before. I would say [the top speed of a R Class yacht] is 11 knots; we hit 12.6. I’ve never seen above 10. We were completely soaked. The boat went through the waves, rarely over the waves, and we just kept fighting.”

The Universal Rule was the rule for yachts in North America during the first half of the 20th century. The most famous boats built to the rule were the J Class yachts, which sailed for the America’s Cup three times in the 1930s. A 1931 agreement between yachting officials from North America and Europe led to the Universal Rule being used for larger boats while the International Rule would focus on smaller boats. The demise of large yachts after World War II effectively killed the Universal Rule, but many boats designed to it live on, and continue to prove their merit—and that of the rule—on the racecourse.

“It’s actually never sedate in the vintage day racers because they’re pure raceboats,” says McClennen. “They’re not cruisers, they’re designed specifically to race, this is what they’re born to do. [Gamecock] has been doing it for 94 years.”

Barring a significant windshift, a lap of Conanicut Island usually features a minimum of sail changes, often one spinnaker set and one douse. But that wasn’t the case on Gamecock.

“We flew three different spinnakers at three different points of sail, with pretty aggressive crew work to get them up and down,” says McClennen. “We started [the run up Narragansett Bay’s West Passage] with an asymmetric, moved to a symmetric and then we moved back to a different asymmetric. Having a broad inventory helped us in all the varied conditions. We just kept the foot on the gas the whole time.”

For Mark Lindquist, who sailed his J/105 Sterling (at left, USA 456) to an overall win in PHRF classes, the philosophy was the same: keep pushing all the way around the track. Lindquist sails his boat regularly on Buzzards Bay, which is known for heavy breeze. So he and his team, who have been with him for most of the 14 years he’s owned the boat, were perfectly at home in today’s gusty conditions.

“It was nice 105 weather,” he says. “We just had the boat tuned up and great crew work and went pedal forward. Downwind around the island was really good, we were able to control the boat, get the boat planing downwind a couple of times. We hit 16, 18 knots heading down the back side of the island.”

The J/105 isn’t known as a planing boat, and Lindquist was worried that two of the lighter boats in the division might turn their respective downwind speed potential into an insurmountable lead by the time the boats turned around the north end of Conanicut Island and headed upwind to the finish off Rose Island.

“We were worried the Quest 30 [Tristan Mouligne’s Samba] because we know it’s a well-sailed boat and he was with us for a long time, but then had a little mess up with his spinnaker take down and we got away from him,” says Lindquist. “The only other boat that we had an issue with the new J/99 [Agent 99, skippered by Jeff Johnstone] because he shot out in front of us [on the run]. He was sailing well, but we were able to keep him in our sights.”

Boat Agent 99 and Sterling took around two and half hours to finish the course. After the handicaps were applied, the margin of victory for Lindquist and his team was a mere 34 seconds.

The most impressive win of the day may have gone to Tom Stark and Ben Wagner in the IC37 class. The Rush team was a few seconds early for the start and had a challenging time getting turned around and re-starting. By the time they were headed back upwind, it looked like they would be hard pressed to get into the top half of the fleet, not to mention the podium.

“We are still getting our communication sorted out between the bow person, Drew [Freides, tactician] and myself and we managed to talk ourselves right over the line and we were over early,” says Stark. “We doubled back and sailed a strong first beat working hard on boat speed and Drew did an excellent job calling tactics across the current and playing the shore across both sides and figuring out when to go across. We worked our way up to the windward mark and were able to round in fourth or fifth.”

A further strong performance on the run vaulted Stark and his crew into the lead, which they held to the finish.

Tonight the tent was full of sailors reliving an epic lap of Conanicut Island. Win or lose, it was a great day of sailing. The slate is wiped clean, however, for the weekend series, which is scored separately. Racing will continue tomorrow, with the first gun sounding at 11 am. Another day of strong breeze is forecast. 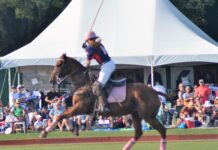