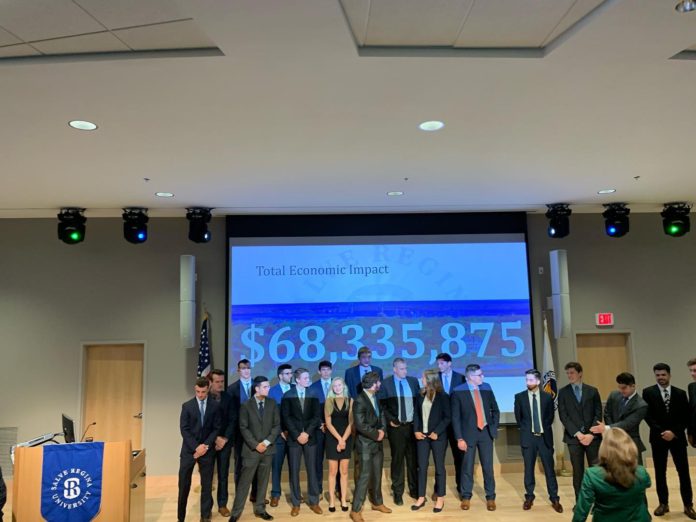 Undergraduate business students who conducted an independent study assessing the economic impact of Salve Regina University on its surrounding communities revealed their findings at a press conference before university officials and community leaders on Thursday.

Among the biggest takeaways from the presentation and analysis are;

Watch the full video for the entire presentation, or take a look at photos of the brochure below.

Salve Regina is a significant presence that affects Newport and Aquidneck Island’s commerce, residential population, local services, tax base, and civic activities in both a quantitative and qualitative manner, explained Sacco. “The university’s activities are inextricably connected with its Aquidneck neighbors, governments and economies,” he said. “What if Salve Regina University was not physically present in Newport and fully committed to positive community engagement? The students’ challenge was to identify the many ways in which the university impacts Newport and Aquidneck Island and measure the individual and aggregate levels of these economic, cultural and Mercy Mission-related civic contributions including job creation, salaries, tax payments, athletic and cultural events, and spending for a multitude of local goods and services.”

The semester-long academic project was completed by students in Sam Sacco’s “Econometrics” class at Salve Regina as their principal course requirement. Students approached university administrators to serve as their “client” in the process, securing all relevant data throughout the semester from several institutional offices and departments. Students also collected data through their interaction with professional sources at Discover Newport, The Newport Chamber of Commerce, Grow Smart Rhode Island and a host of other organizations.

This project marks the third such impact study completed by Econometrics students during the past few years.- Advertisement –

In 2017, Salve business students analyzed the Naval Undersea Warfare Center’s economic impact on Rhode Island’s economy. Students found that the Center created $801 million in total value added to Rhode Island’s economy and generated about 32,243 jobs here, which would be roughly 6 percent of all jobs in the state. They showed Rhode Island collects income taxes from employees totaling $9.4 million, and Aquidneck Island communities collect $2.3 million in property taxes from naval employees.

In its Cliff Walk Impact Study (originally released in 2016 and since regularly updated), Salve students determined that 1.3 million annual visitors to the Cliff Walk account for $115 million in visitor spending in the city.