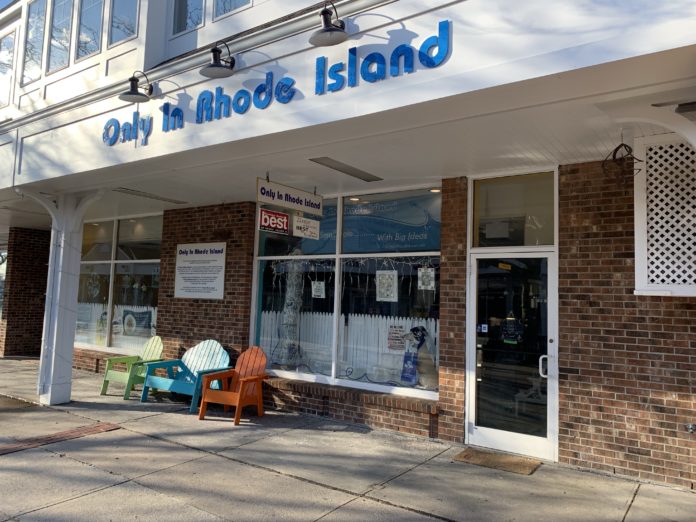 After 17 years on Long Wharf Mall, Only In Rhode Island has confirmed with What’sUpNewp that they have closed their brick-and-mortar store located at 43 Long Wharf Mall..

Fans of the specialty store focused on Rhode Island-made products, gifts, and gift baskets shouldn’t fret though, as the business tells us that they will be expanding their presence and reach in other ways.

“Our online business, as well as wholesale distribution, manufacturing,  corporate, and special event business, has grown to the point that we will now be focused on those segments exclusively. As a result, we will no longer be operating our Long Wharf Mall store but our new offices are right up the street so we’re still as local as ever,” Lisa Harrison from Only In Rhode Island tells What’sUpNewp.

Those wondering where they can buy Lightfoot’s Pine Soap, Black Pearl Clam Chowder, Olneyville NY System Hot Wiener Mix, or Del’s Lemonade Mix won’t have to get very far, according to Harrison.

“Our wholesale line of Only In Rhode Island products will be available in retail stores throughout the state and, of course, everything is made in Rhode Island. This gives us the opportunity to create and develop new products all the time and customize merchandise to suit different locations and retailers statewide,” Harrison continued.  “We will be selling exclusively to local, independent retailers because, after 17 years of doing that ourselves, we know that no one works harder and is more deserving of support”.

What that means is Only In Rhode Island will be distributing products from other local companies, as well as their own. On some Rhode Island products, they’ve had the exclusive to be the only retail able to sell the product. Now that they are selling wholesale, other stores can source it through Only In Rhode Island.

Despite hoping to keep the store open until the end of the month, Harrison
tells us that they have basically run so low on inventory that they decided to close on February 20th.

“Everything we have traditionally sold in our store will still be available online through our original website OnlyInRhodeIsland.com, as well as through our other websites. We will continue to work with local hotels and other establishments to provide bulk items, gift bags, and gift baskets as we always have”.

According to their website, Only In Rhode Island can, and will continue to, create gift or gift basket for corporate VIPs, wedding gift bags, party favors, centerpieces, hospitality appreciation, birthdays, anniversaries, or any other occasion you wish to make truly special.

“Our corporate, wedding, and special event business is also growing and we are so excited to have a new professional space to meet with clients to create and customize gift orders. And because we’re still right in downtown Newport, locals can always call us if they need anything”, Harrison continued.

Because of ongoing renovations in the new space, Harrison wasn’t quite ready to announce where their new headquarters would be but did confirm with us that it is just block up the street and that they’re excited to be part of the continuing Broadway revival.

“I believe Only In Rhode Island has the best retail location in downtown Newport, which made the decision to move a bit more difficult.  I also had a wonderful landlord (words that have rarely been spoken in downtown Newport:). So, when I decided to do this we had a conversation about who should take over the space. I thought it should be a local business, hopefully something creative, that would benefit from our established foot traffic.  He agreed that would be the best fit and the new tenant is exactly that! It’s a positive and exciting change for everyone”.

While holding back who would be filling the Only In Rhode Island space, Harrison tells us that the store was located on Long Wharf Mall for 17 years almost to the day. “I took the space at the end of February,  and we worked on the build out until we opened Memorial Day weekend (that year).  Before I took it, the space was abandoned for 15 years – empty and used as storage. Before that, it was Packer Braman Insurance Co. which was an original tenant when they built the building in the early 70’s”.

Only in Rhode Island is the second store to close in recent months on Long Wharf Mall. In January, What’sUpNewp was the first to report that Yankee Candle had suddenly closed.

“Our local customer base has been so amazing and so supportive over the past 17 years.  I get emotional when I think about not having that regular contact with everyone. This growth wouldn’t be possible without the strong and consistent support they’ve given us and I hope they’ll be happy with all the products we’ll be making available through other local retailers as we move forward,” Harrison concluded.

Only In Rhode Island can be found online at www.onlyinrhodeisland.com.

Do you have news, a tip, a story idea, or something that you think would be of interest to our readers? Let us know! Email Ryan@whatsupnewp.com.