The construction of a new 84-room hotel and restaurant on the former site of the Newport Yachting Center will keep the Newport Skating Center closed for at least the next two seasons.

“We hope to break ground (on the project) sometime the end of October, for a late Spring 2020 completion,” Colin Kane, a founding partner of Peregrine Group LLC and Peregrine Property Management LLC, told What’sUpNewp on Monday. ” The construction activities preclude the rink (Newport Skating Center) for winter 2018/19 and 2019/20″.

Peregrine Group will host a formal groundbreaking for the hotel and property this fall.

The Newport Skating Center, which first opened in 2000, has featured a 9,000 square foot skating surface large enough to accommodate up to 100 skaters at a time.  Skate rentals, hot beverages, comfort foods, lighting for night skating, regular admission discounts, free parking and viewing spaces for the public were also a feature at the rink.

At Friends Of The Waterfront Annual Meeting in October 2016,  Colin Kane and Sam Bradner from Peregrine explained that they would have to look at the plans and see if they could fit it somewhere else on the property in the future.

“Folks should realize how big that rink and how much it costs to run it. Michele (Maker Palmieri, President & CEO of Waterfront Productions which operates the Newport Skating Center) and her team are great to work with, they’ve been great. It’s our hope that if we start construction or if our final master plans show that we can’t host the skating rink that Michele the public and the city can work together to keep the skating rink in Downtown Newport., they have our support.” Kane said then.

On What’sUpNewp Radio Edition in November 2017, Kane said he had hoped that the skating rink would call the parking lot just south of the Smoke House a permanent home when construction was completed. 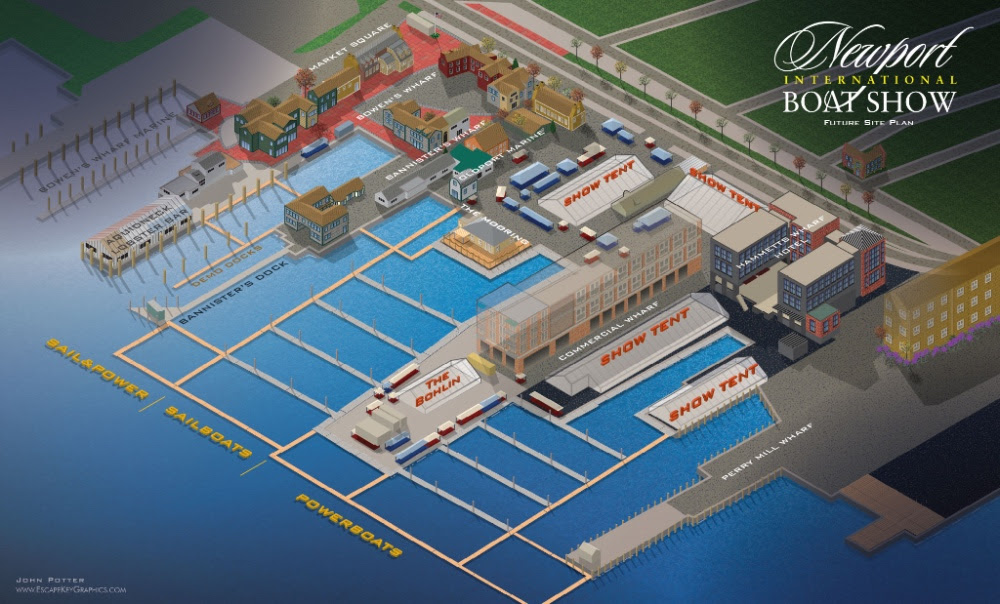 Newport Exhibition Group, owners and producers of the Newport International Boat Show, announced on August 30th that plans are underway for integrating the boat show with the new Hammetts Wharf Hotel that will be built on the show grounds. Ensuring minimal impact on the show, the same number of exhibitors will be accommodated by leasing additional space and increasing the size of existing tents. The in-water portion of the show will not be affected.

According to event organizers, though the future build will relocate some of the exhibitors, the hotel, when complete, will have a positive appeal for the show in a variety of ways. It offers convenient lodging for exhibitors, sponsors and attendees, conference rooms for meetings and seminars, plus a new restaurant and outdoor cafe for networking.

In 2019, for safety purposes, outside construction will be halted from pre-show stage-in through stage-out. No commercial vehicles will be on the show grounds and fencing will surround and contain the construction site.

“Not only will our new hotel bring unique luxury accommodations, facilities, and restaurants to Newport but, like the rest of the town, it will become an integral part of the Newport International Boat Show,” said Sam Bradner, Partner of Peregrine Group LLC, the Hammetts Wharf Project Manager in the August 30th press release. “We look forward to working closely with Newport Exhibition Group to ensure minimal impact during construction, as well as becoming an active show participant once we open our doors.”