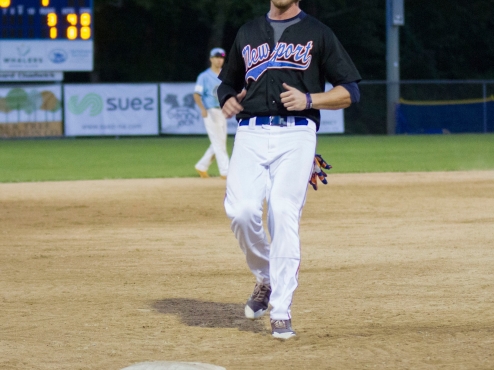 Newport came into Monday’s game with a hot start to 2018. The Gulls dominated as of late, scoring at least five in their last four games while holding a 2-0 record at Cardines Field. It would lose its undefeated home status against a Plymouth Pilgrim team that possessed a 1.67 team ERA by a score of 4-0. The Gulls came in leading the New England Collegiate Baseball League in home runs with nine, but failed to go yard once and only mustered five hits.

The Pilgrims drew the first blood tonight with a single from Plymouth outfielder Max Flower in the top of the fourth inning. In the seventh inning, Plymouth had a brief scoring outburst of three runs, pushing their lead to 4 – 0.

Josh Bates falls to 1-1 despite a strong start in which he pitched four innings, struck out six batters, and allowed one run. The remaining three runs would come off of Michael McCaffrey from the three innings he contributed.

The only bright spot hitting tonight was newly added catcher Zach Britton, who went 2-2 and has a hit in all three of his starts.

Wednesday night, the Gulls (3-3) will play at Cardines Field against the Southern Division leader New Bedford Bay Sox (4-1) at 6:35 p.m. on Gaudet Middle School Night. Keychains will be given to the first 250 people attending them game courtesy of Saccucci Honda.