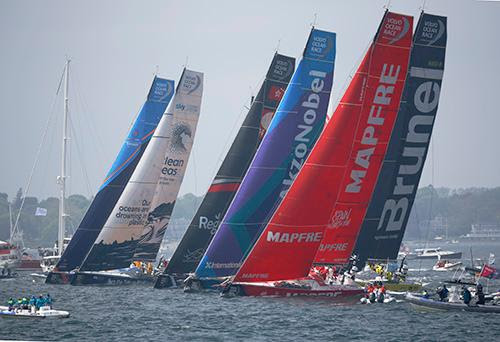 As a dense fog lifted and abundant sunshine washed over Newport, the City-by-the-Sea bid farewell to the Volvo Ocean Race. The fleet of seven VO65 race boats departed on a trans-Atlantic leg bound for Cardiff, Wales.

With the fog cleared the race committee decided to send the fleet on a lap of the East Passage of Narragansett Bay. The speedy race boats rounded turning marks off Castle Hill, in front of Gurney’s Resorts on Goat Island and north of the Claiborne Pell Newport Bridge. After that they were required to pass through the starting line one last time before heading out to sea.

Overall race leader MAPFRE of Spain led the fleet around the first turning mark but was overtaken by Team Brunel of the Netherlands just before the second turning mark. Brunel then put the pedal down and opened a five-boat length advantage to decisively lead the fleet through the starting line in the 15-knot southwesterly breeze.

The action was greatly appreciated with cheers from the thousands of spectators on the shore line of Narragansett Bay at Fort Adams State Park and Castle Hill in Newport, Fort Wetherill in Jamestown and the hundreds of boats in the spectator fleet.

Newport hosted the only North American stopover of the circumnavigation race for the second consecutive time and, as with the first stopover in 2015, it was a celebration of sail and international culture. No fewer than 31 nationalities are involved with the race crews and even more are associated with the race support staff.

“Where better to have the premier sailing race in the world than the capital of sailing in the world, Newport, RI,” said Mayor Harry Winthrop. “What the sailors and race officials really like is the community’s involvement. No matter where they go, especially the folks wearing the team or race gear, people all want to talk to them about the race. That’s a shop keeper who’s never been sailing to people who’ve sailed across the Atlantic. Everybody’s involved.”

Beyond the race boats and the containers and the pavilions that were the readily seen aspects of the Volvo Ocean Race Newport Stopover was a plethora of people in orange baseball caps and t-shirts canvassing the race village.

The bright clothing was worn by the army of volunteers that supported the visitors and teams and organizers who called the Race Village home for the 13-day stopover. The Volvo Ocean Race has used 3,000 volunteers from the start in Alicante, Spain, to the Leg 7 stopover in Itajaí, Brazil. That number increased by 885 when the Newport stopover volunteers were added to the mix.

The volunteers are the first people seen when entering the village and the last people seen when exiting. They are greeters, educators, information specialists and, in the age of social media, picture takers and hospitality assistants. With regards to the Volvo Ocean Race they’re even an albatross, as in “Wisdom,” the mascot of the race. Volunteers are the most valuable asset at any stopover.

Smith said the Newport volunteers ranged in age from 14 to 86 with an average age of 55. They hailed from 31 states and 11 countries. They’re CEO’s, accountants, lawyers, nurses, business owners, moms and dads, students, retirees, holiday makers, sailing fanatics and more.

“I volunteered in 2015 and it was so exciting that I had to be part of it again,” said Donna Bouressa of Portsmouth, R.I. “I’m a sailor and I follow the race on the app. It’s so much fun to meet new people and teach them about the race. I would feel like I’m missing out on something if I didn’t do it again.”

Dan Cummings moved to North Kingstown, R.I., from Minnesota 18 months ago. He tried to schedule a visit to the Newport stopover three years ago, but it never worked out. When the opportunity to volunteer came up this year he jumped at it.

“Sailing is such an international event,” said Cummings. “Walking in from the parking lot on the first day I met a couple from Switzerland. I met a man from Slovakia while volunteering in the Boatyard and he enjoyed listening to me try and speak German. There are also people from around the country. Just look at all the license plates in the parking lot. There’s a lot of fun information to gather.”

The leg to Cardiff is the third-to-last of the Volvo Ocean Race. From there the race visits Gothenburg, Sweden, before finishing in The Hague, Netherlands, at the end of June.