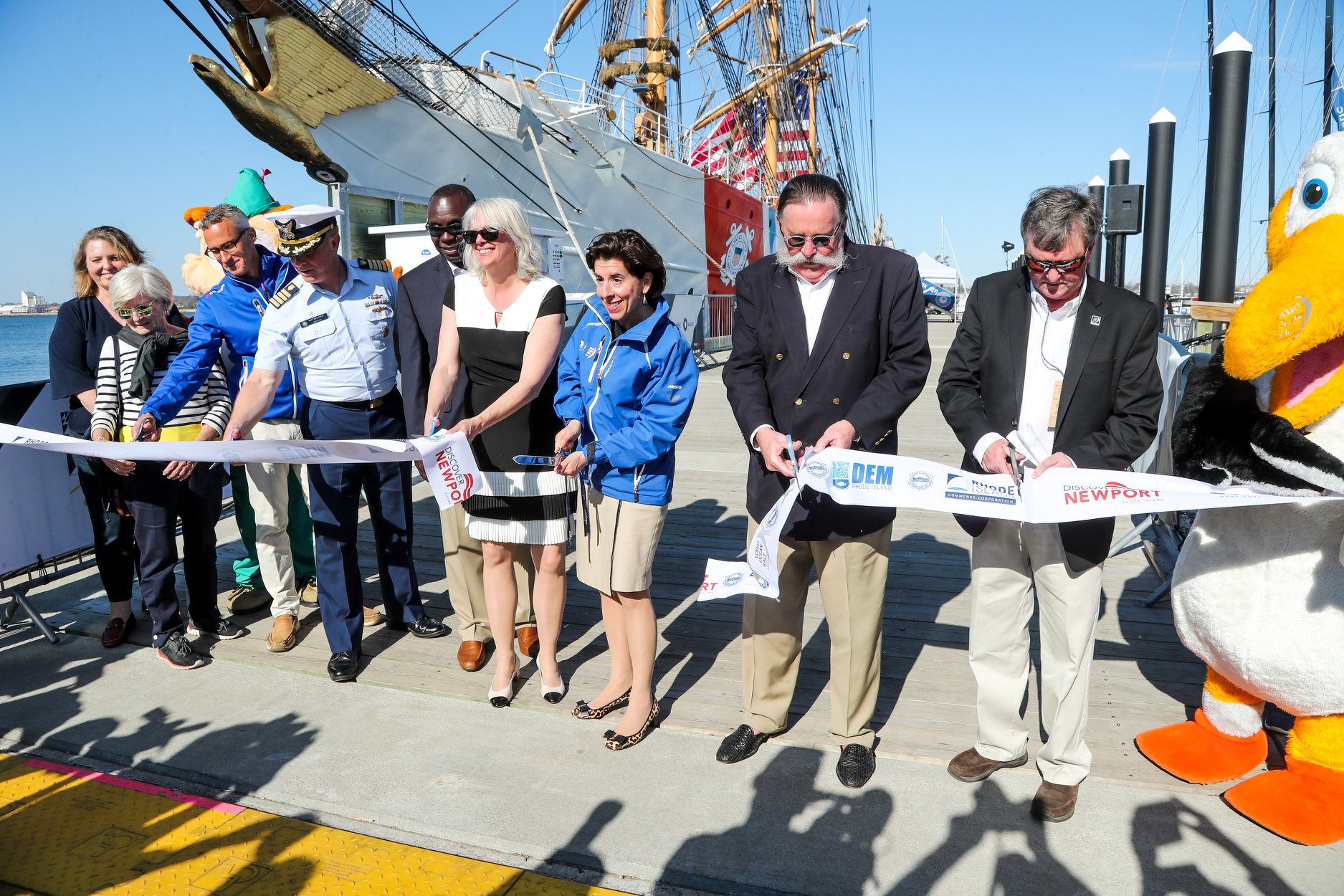 The Volvo Ocean Race returned to Newport this morning for the first time since 2015. Despite the early arrivals, hundreds of people were on the dock at Fort Adams to welcome the sailors home from the sea.

The fleet was led into port by the Spanish boat MAPFRE which came from behind at the very last moment to edge out the Dutch Team Brunel. Vestas 11th Hour Racing, led by skipper Charlie Enright of Bristol, earned a spot on the podium in their home port by finishing third. Dongfeng Race Team, Turn the Tide on Plastic, Team AkzoNobel, and Team Sun Hung Kai/Scallywag rounded out the fleet.

The stirring, come-from-behind victory for MAPFRE, in thick fog and very light winds, returned the team to the top of the overall race leaderboard.

The arrival of the fleet preceded the official opening of the Volvo Ocean Race village which took place this afternoon. A number of dignitaries were on hand for the opening ceremony including Governor Gina Raimondo, DEM Director Janet Coit, Newport Mayor Harry Winthrop, Sail Newport Executive Director Brad Read, Executive Director of the Volvo Ocean Race Peter Ansell, and Matt Meilstrup, Captain of the Coast Guard Barque Eagle which is docked at Fort Adams and provided a magnificent backdrop for the opening ceremony.

“A lot of people said, when we put the bid together, ‘Rhode Island is too small,’ but that’s why we succeeded — because of our smallness,” said Brad Read.

“The Volvo Ocean Races is one of the premier if not the premier sailing races in the world and where better to hold it than in the sailing capitol of the world, Newport, Rhode Island,” said Harry  Winthrop.

“It’s an honor to be here. It’s an honor to bring our large sailboat, our 82-year-old sailboat here among the most modern, technologically advanced sailboats in the world,” said Matt Meilstrup, Captain of the Coast Guard Barque Eagle.

“It is truly great to be back here in Newport, Rhode Island. It’s such a beautiful and historic city. Our first Volvo Ocean Race stopover in 2015 was a great success. We had 130,000 visitors in that time. This time Brad Read and (stopover director) Sue Maffei Plowden have raised the bar higher again to create another fantastic race village full of activities and programs and events both on and off the water over the next two weeks.” — Peter Ansell, CEO of the Volvo Ocean Race

Entertainment was provided by the US Navy Band Northeast, the Coast Guard Band, and the Harris Family Dancers, a group made up of Native Americans from the Narragansett tribe. A parade of nations featuring the flags of all of the countries competing in this edition of the Volvo Ocean Race opened the festivities.

For more information on the Volvo Ocean Race Newport Stopover and for a full schedule of events happening at the Race Village, visit www.volvooceanracenewport.com.