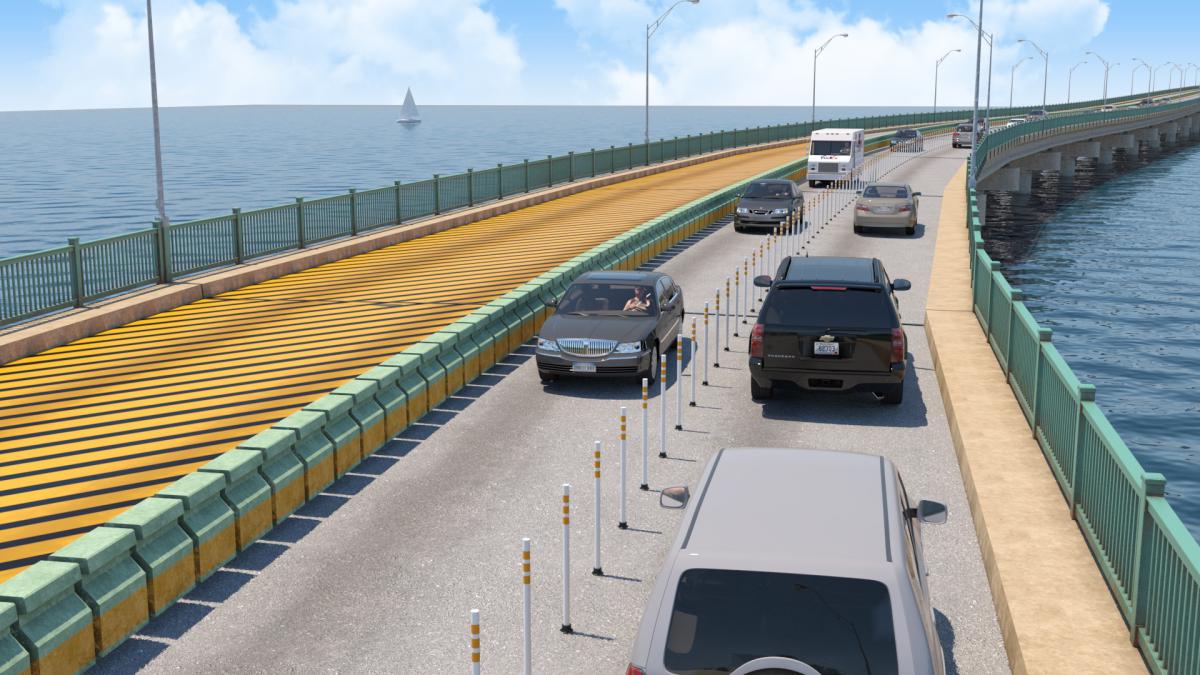 Construction is returning to the Newport Pell Bridge on September 19th, resulting in traffic being limited to one lane in each direction on the Newport side of the bridge, both east and west bound 24 hours a day through November 2017.

After avoiding lane closures in July and August, Rhode Island Turnpike and Bridge Authority (RITBA) has announced that the second sequence of the roadway deck repair project on the Newport Pell Bridge will begin on September 19th and continue through the end of November while the underdeck construction will contine to the end of December.

Back on June 27th,  RITBA announced that the first sequence of the deck repair project on the Newport Pell Bridge was complete. That news came two days before its scheduled completion date of June 29. This work, which began on May 16, consisted of a partial depth hydro-demolition and replacement of the concrete roadway deck from curb to curb for 200 ft. of the westbound and eastbound lanes to the east approach of the Bridge (Newport side). The contractor removed the concrete deck down to the rebar and fresh concrete has been poured. This work required permanent lane closures, and single travel lanes in each direction.

The Newport Pell Bridge Deck Replacement Project consists of work performed on the Newport/Pell Bridge within Spans 22E to the East Abutment (from the Newport shoreline out 2000 feet onto the bridge roadway).

The work to be performed includes the following information that RITBA has outlined on their website, and that we’ve included below;

If you have any questions that are not answered below, please email them to projectinfo@ritba.org

What are the phases of construction?

September 19-end of November, 2017: Hydrodemolition and pouring of concrete on roadway deck

May 15-December 22, 2017: Removal of existing steel bearings and replacement with new elastomeric bearings at all piers and other pier repairs

Will there be a consistent time period during the construction when there will be traffic delays? I regularly use the bridge and would like to plan accordingly.

Yes, there are going to be consistent lane closures on the bridge during the deck repair project and we do expect traffic delays and backups. We expect the heaviest traffic delays during commuter hours from 6:00am-10:00am and 3:00pm-6:00pm. There will be lane closures in various locations throughout construction.

Will work be completed before summer?

Are there any restrictions for overweight/overwide vehicles during construction?

How much is the deck replacement going to cost and who is doing the construction?

Will there be police details on the bridge to ensure safety during the project?

Yes, Rhode Island State Police will be present 24 hours a day during roadway deck repair portions of the project. The police details will be enforcing the overweight and overwide restrictions as well as speed limits in an effort to make the bridge safer for all motorists.

RITBA is expecting significant traffic delays, will there be an extra police presence to assist with minimizing these delays?

Why is the Deck Repair project necessary?

The Newport Pell Bridge is a vital assest which has an important economic role in the State of Rhode Island. RITBA has extended the life expectancy of the bridge deck from the original estimate of 30 years to 50 years through constant attention and maintenance but it is now at the point where it needs major repairs.

Why didn’t the project start later and avoid work during September?

The timing of the start of construction on this project is contingent on a number of factors. The most important one is the temperature. The bridge deck is made of concrete which is such a common product that people often do not give it much thought. We do. When wet concrete hardens it goes through a chemical reaction called hydration. This is commonly referred to as curing. In order to have the concrete harden to the required strength and density the temperature has to be at a certain minimal level. If it is too cold you will not get the quality concrete you need. Having the required strength and density of the concrete is critically important for a bridge. Whereas concrete takes considerable time to cure we must consider both the daytime and overnight temperatures. Everyone knows it is colder on our seacoast than it is inland. With the Newport Bridge situated over water that is virtually at the mouth of the Bay we need to consider the water temperature as it has significant impact on air temperature. Water temperature is colder in the spring than it is in the fall after heating up all summer. Our experience is with the rain and temperatures in Newport in the spring we need to start our construction season later than if we were inland. We will be pouring a long relatively narrow and thin volume of concrete so this project is particularly sensitive to temperature. It simply would not be prudent to have started this project any earlier.

Why don’t you do work in the evenings and overnight?

We are. There are a number of components to this project. Many of them continue overnight. The scale and size of this project is such that it could not be completed in a reasonable timeframe if all work were to take place exclusively in the evening and overnight. Further, whereas we are taking out about half the depth of the roadbed it is not the type of project where we could pull equipment off the bridge, reset the traffic pattern, remove guides (barrels, markers, cones, signage, etc.) and have vehicles travel over the sector we are demolishing. Once the contractor begins the work the lane restrictions must stay in place.

Why are you doing this now in the “summer” season?

No work was done on the roadway deck during the peak months of July and August.  We sequenced the project in this manner to avoid traffic problems in the peak summer months.

Why are you doing work during rush hours?

The complexity and magnitude of the project do not allow us to open up the section we are working on to traffic during rush hour.  We are literally taking out much of the roadbed and removing the bridge deck down to the rebar (steel support rods imbedded in the concrete).  Vehicles simply cannot travel across the construction area so we cannot open it up for rush hours and close it off again.  The photo below shows the situation with the construction area and the exposed rebar.

What other options were considered?

There are few other options. The following were considered:

1) Close the bridge entirely until the entire deck was completed from one end of the bridge to the other. Require traffic to be re-routed via the Mount Hope and Sakonnet Bridges and add ferry service from Jamestown to Newport. This would be for 12 to 18 months.

a) This option was immediately rejected

of July and August

and August with above deck work beginning again in September

3) Build deck sections off-site and drop them in place.

a) Detailed response below

Why can’t you build the sections off-site and drop them in?

To construct the deck sections off site and drop them in place would require the complete removal of the existing deck. Not just the partial replacement we are doing. The section of the Newport Bridge we are working on has a concrete deck on top of pre-stressed concrete beams. It was constructed in such a way that the concrete deck is connected to the concrete beams through reinforcing steel that is embedded in the deck and the beams. Demolishing the full depth of the deck while leaving the beams intact would require significant effort. The other option for pre-cast replacement would be to completely remove the entire bridge deck as well as the concrete beams. This would be an entire bridge deck and beam replacement. The expense and time to do this would be magnitudes higher and longer. We are doing a less invasive and much less expensive partial deck repair. The reason we are able to do this to an almost 50 year old deck is due to the good stewardship of the bridge by RITBA.. The bridge deck was only anticipated to last 25 years. The constant attention and maintenance RITBA has performed on the bridge over the years has not only extended the life of the bridge deck but also makes this less invasive, less costly and less time consuming  partial deck replacement process possible.

Yes. Three separate consulting engineers have reviewed and helped develop the traffic patterns we are employing; Steere Engineering, WSP and CDR Maguire. We have also met with and reviewed the traffic pattern with the Rhode Island State Police and local first responders. Also as the project evolves we are altering and adapting the traffic pattern, signage and police details in attempts to reduce the time it takes to travel across the bridge.

Why are the “Open Road Tolling” (ORT) lanes closed?

The ORT lanes are closed for a number of reasons. First and foremost is safety. Having these lanes available for first responders is important. Also for safety reasons the speed on the bridge has been reduced to 20 MPH during this project. Closing the ORT lanes helps to enforce the reduced speed on the bridge. We have also found that closing the ORT lanes helps to mitigate issues with merging lanes into one travel lane.  Lastly, it also allows RITBA to monitor and enforce the restrictions on overweight and overwide vehicles which will be in place for the duration of this construction project.

If there is an accident on the bridge how will emergency vehicles be able to respond to accidents?

RITBA has consulted with both local and state agencies as part of the construction planning process for the deck replacement project. We have discussed protocols for handling various incidents with our first responders and law enforcement agencies and have plans in place to handle a variety of possible incidents that may arise on the bridge.  Additionally, our maintenance department is trained to modify the lanes in the event an emergency occurs.  If an accident occurs it may be necessary to close the bridge to accommodate emergency personnel.

Are there alternate routes to access Aquidneck Island and the City of Newport?