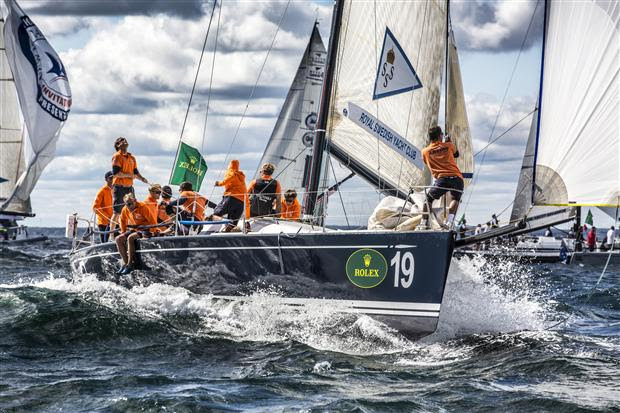 The splendor and power of racing sailboats will be on display during New York Yacht Club Race Week Presented by Rolex.

Rolex has been a committed partner of the most prestigious yacht clubs, institutions and regattas in the world, since it began its partnership with the New York Yacht Club in 1958. New York Yacht Club Race Week is one among many of the top international events supported by Rolex, held at world renown yacht clubs with which Rolex has partnered. Others events include the Giraglia Rolex Cup with the Yacht Club Italiano, the Maxi Yacht Rolex Cup with Yacht Club Costa Smeralda, and the Rolex Fastnet Race with the Royal Ocean Racing Club.

The New York Yacht Club Race Week Presented by Rolex and the Rolex Big Boat Series, hosted by the St. Francis Yacht Club in San Francisco (Sept. 15-20), are the two key regattas in the U.S. this summer, supported by Rolex. The two events are symbiotic in that they offer quality racing for a variety of one-design and rated classes. They attract the top owners and sailing talent in the world who know that a Rolex-sponsored regatta is going to set a high bar for quality.

“Rolex does a great job sponsoring these regattas,” said Tom Sutton, owner of the J/35 Leading Edgethat won the overall performance trophy for the Around the Island Race at the New York Yacht Club 162nd Annual Regatta Presented by Rolex last month. “I’ve sailed in a lot of Rolex events and I know it’s always going to be a first class regatta. I appreciate everything Rolex brings to the sport.”

This weekend’s racing features classic boats and multihulls. Much like a Rolex, the classics are elegant and represent a love affair for the owner. They’re yachts that must be owned, no matter the commitment. Some yachts, such as Joe Loughborough’s (Newport, R.I.) Luders 24 Belle (pictured) were designed and built before 1958, the year that Rolex and New York Yacht Club entered into partnership. Born in 1944, Belle has long overhangs on the bow and stern that extend its length from 24 feet on the waterline to 38 feet overall.

For Loughborough, Belle brings him back to his sailing roots in Cowes, England, where he grew up sailing boats with long overhangs that made them wet in the slightest of seaways.

“When I first saw Belle for sale in a boatyard I knew I had to own it,” said Loughborough. “I started sailing with my old man at 4 years old, sailing International One-Designs around the Solent. In the late 1960s he had a converted 8-Metre. The first boat I ever skippered was a cruiser/racer 12-Metre. My roots are with Metre boats, so when I see a skinny, wet boat I get excited.”

There are a total of 22 classics entered, also including 12-Metres, Herreshoff S Class and other schooners and sloops. Six multihulls are entered, including Stephen Cucchiaro’s (Boston, Mass.) Gunboat 60 Flow, which counts 1993 Rolex Yachtsman of the Year Cam Lewis (Lincolnville, Me.) in the crew.

Lewis won the Rolex award for his role as a crewmember aboard an 86-foot catamaran that was the first sailboat to circumnavigate the world non-stop in less than 80 days, bettering the mythical achievement of Phileas Fogg and Passepartout in Jules Verne’s novel Around the World in 80 Days, and he hasn’t stopped sailing fast.

“It was tremendous to be honored by a great timepiece for a timely achievement and become part of the Rolex family,” said Lewis. “Racing multihulls provides a high level of excitement and exhilarating racing, especially when the breeze is on. The sailing experience for everyone fortunate enough to be onboard on any given day always leaves them with big smiles and great memories.”

Rolex’s involvement and the prizes that it offers contribute to make New York Yacht Club’s Race Week a must attend event. The iconic brand will award four Stainless Steel Submariner Date watches during the regatta: to the best overall performing yacht of the first weekend and three others in the second half of racing—the winners of the C&C 30 and J/109 one-design classes and the best overall performing yacht of the IRC-rated classes. First introduced in 1953, the Submariner has a redesigned Oyster case, distinctive dial with large luminescent hour markers, graduated rotatable Cerachrom bezel and solid link Oyster bracelet.

“They’re great timepieces. Every time someone wins one they cherish it,” said New York Yacht Club Vice Commodore Phil Lotz, who has won three Rolex timepieces. “That’s a real trophy for people and they gun for it. It’s fun to watch someone who hasn’t won one before go up and receive their first. It’s a big deal in our sport. People want to win a Rolex.”

Highlights of the racing can be viewed at the New York Yacht Club’s Regattas Facebook page and itsInstagram account.