International Tennis Hall Of Fame Tennis Championships – July 9 – 17, 2016:  Contested on the historic grass tennis courts of the International Tennis Hall of Fame, the tournament is the only event played on grass courts outside of Europe, and it offers the only opportunity to see professional men’s tennis in the Northeast prior to the US Open. More info:  www.halloffametennischampionships.com

New York Yacht Club Race Week – July 9 – 16, 2016: More than 100 yachts from 25 to 100 feet long are expected to compete on Rhode Island Sound and in Narragansett Bay. This biennial event is one of the biggest regattas of the summer for top skippers and their crews. More info: www.nyyc.org

11am – Dog Day of Summer at Redwood Library

9am – Newport Ice Cream Train – Save the Date

8pm – Mixed Mayhem with The Bit Players at The Firehouse Theater 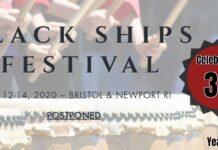