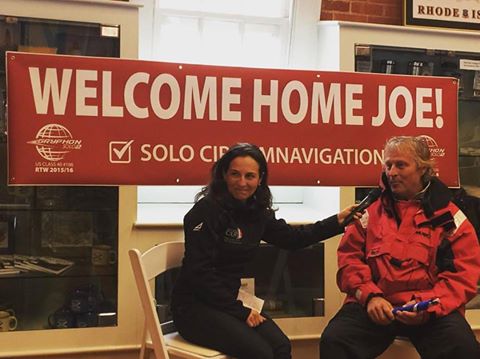 Joe Harris on board his Class 40, Gryphon Solo 2 completed his  solo circumnavigation of the globe around 8:00 a.m. this morning.

While his time is unofficially 152 days (without counting stoppage time) the official time of is trip is pending and more information will be available soon.

Upon his arrival at Sail Newport, Brad Read presented Harris with a Sail Newport burgee and made him a lifetime member.

U.S. short-handed sailor, Joe Harris departed Newport, Rhode Island on November 15, 2015 in an attempt to break the non-stop solo Around the World Record for 40-foot monohulls. Harris sustained damage to his hydrogenerators forcing him to stop in Cape Town, South Africa on December 28, 2015 ending his record attempt.

However, Joe elected to continue on and complete his solo sail around the world. Joe was again was forced to stop in Pirialopolis, Uruguay on March 24, 2015 due to hull damage.