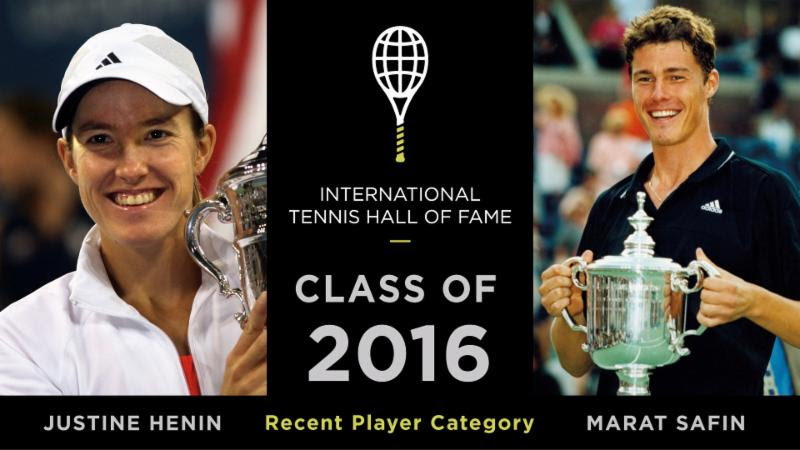 Additionally, Yvon Petra and Margaret Scriven have been elected for posthumous induction in the Master Player Category.

Of the induction, Justine Henin stated, “It’s a big honor. I was five years old when I started playing tennis and my dream was to become a champion. All of the things that then happened- all the dreams that came true, all the victories and Grand Slams, and every emotion that I lived in my tennis career remains something very important in my life today. Being part of the Hall of Fame says that it will remain something forever, and that is very special. I am really honored.”

Marat Safin commented, “I’m very happy to be inducted to the Hall of Fame. I want to say thank you to everyone who helped me and supported me throughout my tennis career. To be part of a Hall of Fame is every athlete’s dream. I am really honored to be inducted and proud to represent Russian tennis alongside the greatest champions of tennis history.”

Henin and Safin have been elected in the Recent Player Category for induction in the Class of 2016. In addition, Yvon Petra, a notable French tennis player of the 1940s, and Margaret “Peggy” Scriven, British tennis champion of the 1930s, will be inducted posthumously in the Master Player Category.

The International Tennis Hall of Fame Class of 2016 inductees were announced this morning at a press conference in New York City in conjunction with World Tennis Day and the BNP Paribas Showdown.

The Class of 2016 Induction Ceremony will be held on Saturday, July 16, 2016 during Rolex Hall of Fame Enshrinement Weekend at the International Tennis Hall of Fame in Newport, Rhode Island. The weekend will also feature museum tribute exhibits for the new Hall of Famers and celebratory parties and special events. The ceremony and festivities will be held in conjunction with the annual Hall of Fame Tennis Championships, an ATP World Tour event. Tickets for the event are on sale now on www.HallofFameTennisChampionships.com