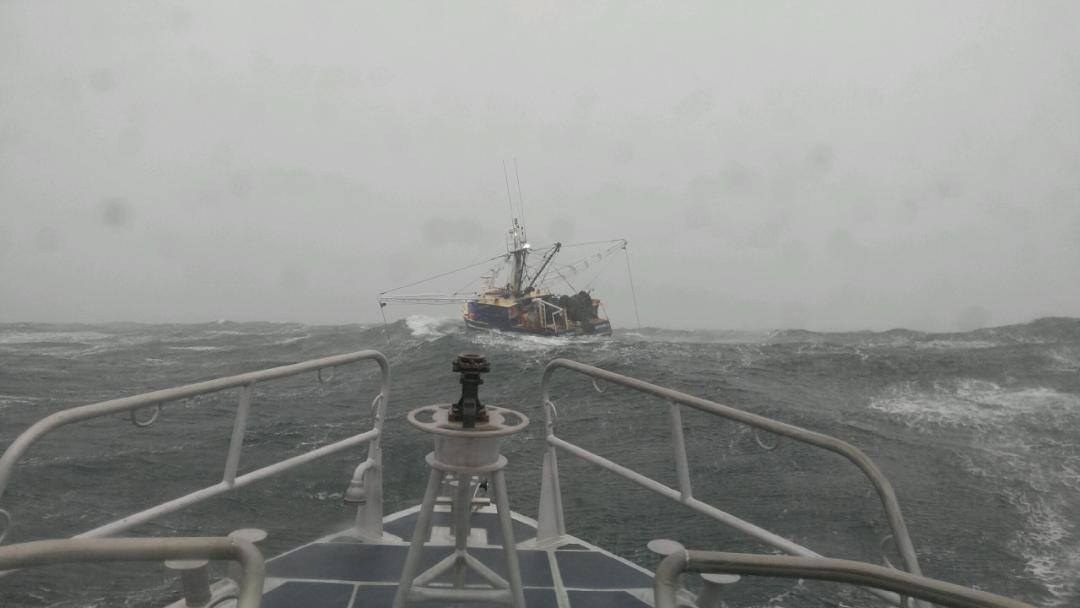 It’s been a busy and dangerous day for local U.S. Coast Guard crews as they had to respond to a disabled Rhode Island ahead and during winter storm.

“Today the crew faced 50 mph winds, up to 14 foot seas and minimal visibility in the blowing snow to ensure the safety of a 50ft fishing vessel off of Block Island. The F/V’s windows had blown out from the waves which was causing water to enter their cabin. They were escorted safely back to Newport. Great job to the crew working in such extreme conditions. Also on scene were a helicopter from Coast Guard Air Station Cape Cod and a 47′ Motor lifeboat from Coast Guard Station Menemsha
(Photo (above) by FN Klingensmith)”

The following information was provided by the United States Coast Guard in a release;

At approximately 8:30 a.m. Saturday, watchstanders at Coast Guard Sector Southeastern New England in Woods Hole, Massachusetts, received a call via VHF channel 16 from the captain of the 50-foot Tamara stating his vessel’s navigation equipment had failed and he was having trouble steering.

A 45-foot Response Boat Medium from Station Castle Hill was launched along with a 47-foot Motor Lifeboat from Station Menemsha.  While the three-man fishing crew was not in any immediate danger, an MH-60 Jayhawk helicopter from Air Station Cape Cod was launched as a precaution.

The Station Castle Hill crew arrived on scene at about 9:45 a.m. and began escorting the Tamara toward the Newport State Pier. They are scheduled to arrive at the pier at approximately 3 p.m. today.

“The incoming storm is expected to be significant,” said Chief Petty Officer Joshua Herman, the Command Duty Officer at Sector Southeastern New England. “Any vessels in its path should make a course to port as soon as possible”