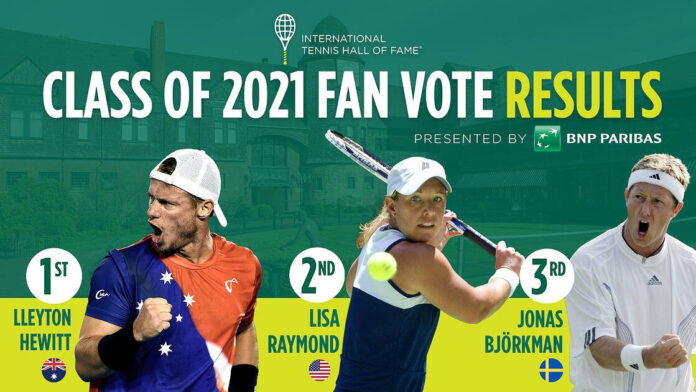 By International Tennis Hall Of Fame

Thousands of dedicated tennis fans from 140 nations rallied behind the candidates they believe are deserving of tennis’ ultimate honor in the Class of 2021 International Tennis Hall of Fame Fan Vote presented by BNP Paribas. Following a four-week voting period, the results are in. Of the five nominated candidates, Australian great Lleyton Hewitt received the highest number of votes. American doubles star Lisa Raymond finished in second place, and Sweden’s Jonas Björkman, a former doubles world No. 1, finished in third place.

“On behalf of BNP Paribas, we extend our congratulations to Hall of Fame Fan Vote leader Lleyton Hewitt and to all the candidates who have received this incredible nomination,” said Jean-Yves Fillion, CEO, BNP Paribas USA. “This year, it was very important to BNP Paribas to find creative new ways to continue to support tennis and our longstanding partner, the International Tennis Hall of Fame. While we have certainly missed engaging with fans at our traditional in-person events, the Hall of Fame Fan Voting program has been a terrific way to see tennis fans engage with the sport we all cherish.”

On his first-place finish, Lleyton Hewitt stated, “Being nominated for the Hall of Fame is such a huge honor for me already, and to experience this incredible support from the fans while going through the Hall of Fame process just makes it even more special. There are four additional great candidates with me on the ballot for the Hall of Fame, and I’m really honored and appreciative of all the support I’ve received from tennis fans in Australia and around the world.”

To be elected into the Hall of Fame, a candidate must receive an affirmative vote in 75% or higher of ballots submitted from the Official Voting Group, which is comprised of tennis media and experts, or a combined total of 75% or higher from their Voting Group result and any bonus percentage points earned in the Fan Vote.

The International Tennis Hall of Fame Fan Vote was introduced in in 2018 as a way of connecting tennis fans with the sport’s history and its inspiring athletes, after their playing careers have stopped.

“In today’s digital world, sports fans are more knowledgeable and connected to athletes than ever before. We are pleased to give them the opportunity to express their opinions in determining who will be the recipients of tennis’ ultimate honor. It’s been great to see fans embrace this opportunity with a strong voter turnout from all over the world. In such an unusual year for tennis, we are glad to offer this unique and important way for fans to engage with the sport, and we are grateful for our longstanding partner BNP Paribas for their support of the 2021 Fan Vote,” and said International Tennis Hall of Fame CEO Todd Martin.

Being inducted into the International Tennis Hall of Fame in the Player Category recognizes an athlete’s achievements as being among the all-time best in the history of the sport. To date, the honor has been presented to just 259 tennis greats from 27 nations around the world, including legends like Andre Agassi, Martina Navratilova, Chris Evert, John McEnroe, Bjorn Borg, Kim Clijsters, and Martina Hingis, among others. 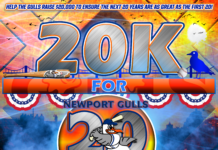 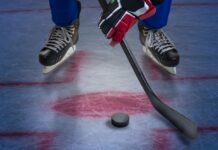