NEWPORT, R.I. — NUWC Division Newport is world-renowned for its innovative ability to solve problems, and there has been no shortage of challenges throughout the coronavirus pandemic and recent nationwide protests.

One of those issues has been trying to capture the in-person elements lost while operating in a maximum telework environment. In response, Division Newport has tapped into a number of digital platforms to regain some of those brainstorming processes found in group activities.

“We know many in the workforce are grieving, feeling helpless and isolated,” Technical Director Ron Vien said in an all-hands message prior to a Fusion chat he hosted on June 9. “Let’s talk about it, together. Throughout the Navy, NAVSEA and the warfare centers, and speaking for Division Newport, Commanding Officer Capt. Chad Hennings and I are here for you.”

The Fusion chat afforded Division Newport employees an opportunity to share some of the stories of prejudice they have faced in their lives and discuss how to keep such instances from happening again. Along with the Fusion chat, a Virtual Town Hall with Vien and Hennings was held on June 17.

During the live broadcast, Vien and Hennings addressed employees and then fielded questions.

Another tool is Commercial Virtual Remote (CVR) Environment for unclassified work powered by Microsoft Teams. This is a commercially available collaboration tool tailored for Department of Defense (DoD) customers. It can be used to chat, meet with audio and video, and develop and share content, though this tool cannot be used to send and receive emails.

Gary Huntress, an electrical engineer in Division Newport’s Undersea Warfare Platforms and Payload Integration Department utilized CVR on May 26 to teach an introductory machine learning class. The goal was to leverage the live environment allowing participants to write code and not just watch a presentation. While he noted it took some time to get used to the new teaching platform, overall the experience went well.

“I’d give my class 6.5, maybe 7 out of 10, which I think is pretty great for a first try with a lot of brand new components,” Huntress said. “I had to master a few details about Teams as a novice user, let alone a presenter. As you would expect, I have a list of lessons learned and we’ll do better next time.”

One of those lessons resulted from a glitch that nearly halted the class within its first 10 minutes.

“I set up a generic software environment and tested it to the extent that I could. I deployed it for each user as they joined, but one of their packages failed,” Huntress said. “It was a Python machine learning library that I thought I had installed system-wide but in fact was per user, so it had to be installed for each user.”

At first, Huntress thought this task would take up nearly all of the allotted class time, but one of the participants reminded him that students could run the necessary command themselves.

“That worked great and we got back to training in a few short minutes,” Huntress said. “The rest of the class was problem free.”

Huntress also noted that finding a balancing between lecturing, typing, reading the chat and listening for questions — all while meeting time requirements — was an adjustment.

“In person, I can speak to the audience and get almost immediate but silent feedback from their facial expressions. From that I can tell if my point is getting across or not, and I can change what I’m saying on the fly,” Huntress said. “In Teams, I feel like I’m just speaking at my computer, my pacing is slower, and I occasionally ask for active feedback. That works, and I’ll have to adapt to it.”

On May 19, the Undersea Warfare Combat Systems Department, utilized a similar capability when it held a remote training session in the videoconferencing center. The Submarine Launched Unmanned Aerial System (SLUAS) Team gave instruction and consultation on use of the capability to SUBPAC Hawaii and NUWC Keyport in anticipation of an upcoming test of the system.

How much Huntress and others will have to adapt to distance work will be determined in the coming weeks. Meanwhile, employees who are visiting the Division Newport campus are taking safety precautions by wearing face coverings when in communal areas or within 6 feet of another person. The workforce is also required to self-monitor for any illness or temperature above 100 degrees and other symptoms prior to reporting to the base.

Newport City Council to meet on July 22, here’s what’s on the agenda 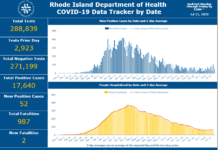