The announcement came via his Facebook profile, “I am very excited to announce my candidacy for the 2nd Ward City Council seat. I feel the time is right for a new voice, a local voice, a business voice! More info for volunteers and donation to be coming shortly.Thank you and I look forward to the challenge!”

Lynn Ceglie currently represents the Second Ward on Newport City Council. Ceglie has not publicly announced her re-election plans yet.

Holder, who has nearly 40 years of experience working in the hospitality industry, is the current operations manager for Midtown Oyster Bar and Surf Club Newport. Holder has managed some of the busiest restaurants in Newport, including OceanCliff Hotel and the Atlantic Beach Club.

The RI Hospitality Association (RIHA) in February appointed Holder to its Board of Directors.

Holder is also a member of the Newport Chamber of Commerce and the Newport Restaurant, Lodging and Tourism Association. 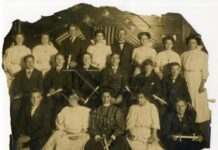