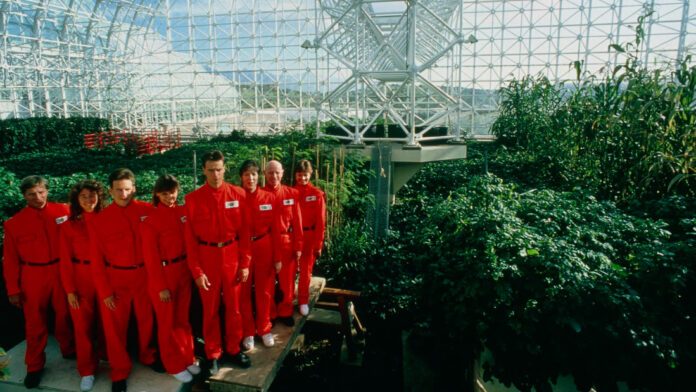 Though it occurred a few years before I was born, I was vaguely aware of the Biosphere 2 project before sitting down to watch Spaceship Earth, director Matt Wolf’s new documentary on the subject. I knew that, at some point, someone built a large, self-contained building recreating various ecosystems, and that a group of people had been locked inside to see if they could live in this mini-Earth. I had no memory, as many others might, of the media circus that surrounded it, criticizing the experiment’s scientific aims and even suggesting it was run by a cult. Viewers with either level of familiarity will enjoy this more complete telling of the story, even if the “truth” behind any of the more sensationalist claims is kept tantalizingly out of reach.

In the late-‘80s and early-‘90s, an entrepreneurial counterculture community with the backing of a billionaire built an artificial biosphere, recreating environments as diverse as a rainforest, a savannah, and a coral reef, with the hope of advancing research that could eventually lead to colonizing Outer Space. They named it Biosphere 2 in deference to our planet, the first self-sufficient biosphere. In 1991, a group of eight “biospherians,” each with a different technical or scientific expertise, volunteered to close themselves in for a period of two years to see whether they could sustain both themselves and the environment within a closed system. Intrigue and controversy ensued.

Why someone would be drawn to make a documentary on this experiment is obvious, but Wolf makes sure that the story belongs largely to its participants. The film takes the time to develop the group of dreamers behind Biosphere 2 before diving into its main attraction, and it’s difficult not to develop an appreciation of their ethos. A commune devoted to all things art and science, they embarked on project after project with a steadily increasing ambition, operating under the firm belief that no enterprise was beyond them. By the time they do try to realize the Buckminster Fuller concept that gives this documentary its name, their mission doesn’t seem as bizarre anymore. But under the strain of the national media attention that suddenly comes their way, that aura of optimism begins to show cracks.

One of the film’s best features is the way it focuses on the imperfections of their experiment, countering the grandeur of their goals with the deeply human execution of them. Wolf sometimes uses this to keep us wondering whether there is something cultish about this group and their suspiciously charismatic leader, John Allen, but most often, the layer of absurdity only makes the endeavor more endearing. There’s something about the biospherians’ awkward struggle to close the outer door after entering with such fanfare that hammers home the reality of such an unreal story. And, as the interviewees remind us, Biosphere 2 has more to offer than just an entertaining diversion— the environmentalist lesson of their experience, brought more sharply into focus by the circumstances of the experiment’s end, is one worth taking with us after the credits roll.

Jane Pickens Theatre, closed due to the COVID-19 crisis, is running a virtual screening room. Support this cherished local business by clicking here to purchase a rental.