The proposal is one of five Stage 2 proposals on the council’s agenda. The others are Burrillville, $7.2 million; Cumberland, $79.1 million; Warwick, $56 million; and Cranston, $146.8 million.

If approved, the state’s share for Newport would be a base of 35 percent, plus the likelihood of another 17.5 percent by reaching a variety of incentives. A bond referendum would likely go to voters in November.

A couple of years ago RIDE released the Jacobs report, an assessment of every school in the state, painting a dismal picture of the condition of schools from every corner of Rhode Island. It suggested it would cost hundreds of millions of dollars just to bring schools to a safe levels, and up to $3 billion for schools to achieve not only safety, but provide what is characterized as a “21st century learning environment.”

The Jacobs Report portrayed Newport’s Rogers High School as the high school in the worst condition of all high schools in the state.

The proposal that RIDE will consider Wednesday is the result of an exchange of ideas between the school system and state.

It calls for construction of an approximately 166,000 square foot, 755 student school that consolidates the high school and Career Tech Center, part of a districtwide masterplan that also includes an eight-classroom 15,000 square foot addition to the Pell Elementary School.

Proponents of the local bond have an uphill battle. The economic shutdown caused by the coronavirus has stripped local and state governments of considerable revenue and put considerable economic pressure on a large percentage of taxpayers.

Meanwhile, there are forces working against the proposal, offering different approaches.

Citizens Exploring School Unification is a group working to gather enough signatures to force a Middletown referendum that would force the town to discuss possible school unification. The Middletown Town Council rejected Newport efforts earlier this year to at least engage in unification discussions.

Also, Wednesday night the Town Council is reported going to consider splitting the referendum into two separate referenda, one for Pell and the other for the high school, according to Beth Cullen, who describes herself as an education advocate.

Cullen also has her own proposal, with pre-K to sixth grade at Pell, seventh grade through 10th at Thompson, and juniors and seniors scattered among several school systems and education platforms. She believes Rogers High School should be closed as soon as possible, with the school system paying tuition for juniors and seniors at Middletown, Portsmouth, and North Kingstown High Schools. Additionally, she said the school system should consider distance learning and internships, among other creative educational methods.

Editor’s Note – What’s Up Newp will carry the meeting live below, on our Facebook Page, and on our YouTube Channel. 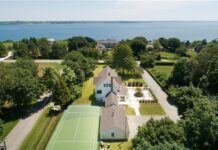