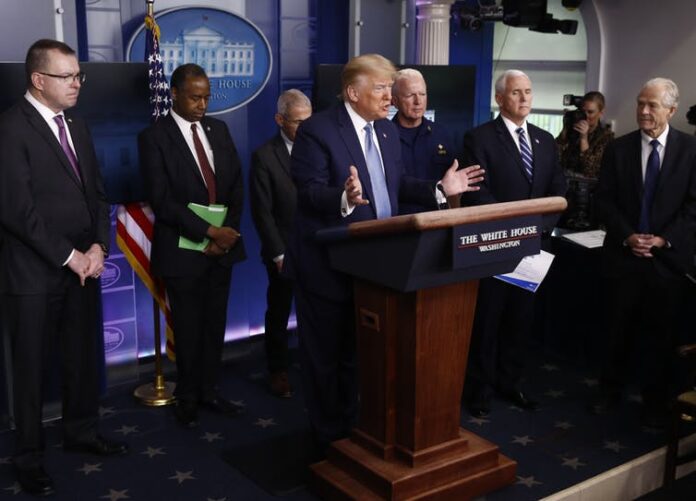 The COVID-19 pandemic has spread to almost every country on Earth. And yet, several American officials refer to it as the “Wuhan virus” or even the “Chinese virus.”

U.S.-Chinese antagonism in this vein is not new. But, while this deliberate move to associate Wuhan, and more generally China, with the COVID pandemic serves a political purpose for the Trump administration, it also has significant implications for civil society and public health.

As a historian of public health and modern Africa, I study the politics of infectious diseases and responses to them. In addition to inflaming racism, emphasizing the foreign or external origins of a disease influences how people understand their own risk of disease and whether they change their behavior.

WHO guidelines are clear

While identifying a new disease by its place of origin seems intuitive, history demonstrates that doing so can harm the people who live there.

Consequences can include economic distress, as tourists withdraw, investment cools down and solidarity between people weakens. Linking a specific disease with a specific place can lead to discrimination, stigmatization and avoidance of a town or village.

For all these reasons, in 2015, the World Health Organization established a new set of best practices for naming diseases. The WHO sought to abandon associating places with a disease – as was the case with COVID-19’s cousin, MERS (Middle East respiratory syndrome) in 2012, and many others in the past.

So on Feb. 11, the WHO recommended using the name COVID-19 when referring to the novel coronavirus that was, at the time, sickening and killing people in central China and elsewhere in eastern Asia. Other experts concurred, but differentiated between the virus that causes the disease, known as SARS-CoV-2, and the disease itself, COVID-19.

The name reflects the pathogen (a coronavirus, COV), the nature of the illness caused (an infectious disease) and its year of origin (2019).

A long tradition of naming by place

Tagging a place when identifying a disease has a long history.

In the 19th century, as global trade and mobility allowed cholera to spread worldwide from its origins in the Ganges Delta, the disease quickly became known as “the Asiatic cholera.” That label persisted for decades, implicitly blaming an entire continent for a disease that can spread anywhere as a function of poor sanitation.

For Europeans and Americans of the time, Asia was an exotic, distant somewhere else. Distinguishing the disastrous illness of cholera as “Asiatic” fit with the racialized, imperial views that denigrated the intelligence and the cultures of non-white populations globally. It also helped justify more stringent quarantine measures and travel restrictions for people read as “Asian” and not European. Muslim pilgrims en route to Mecca from southern Asia, for instance, were subject to different rules than European troop ships traveling the same routes.

Ideas about disease changed after the late 19th century, when scientists could use new laboratory techniques to link specific pathogens – bacteria, parasites and, later on, viruses – to specific diseases. Sometimes, this gave a scientific name to an age-old problem, such as “consumption” becoming the medical entity tuberculosis.

But these new techniques also allowed researchers to correlate pathogens with particular locales. Naming an illness after a place quickly became the norm.

So Rift Valley Fever, caused by a virus in the Bunyaviridae family, got its name from an area of colonial Kenya where it was first reported.

The Hantaviruses are linked to the Hantan River area of South Korea where Dr. Ho-Wang Lee first identified the virus.

Ebola virus disease got its popular name from a river near the village in the modern nation of Democratic Republic of Congo where U.S. and European scientists identified that pathogen. Scientists chose that name deliberately, trying to avoid saddling any one village with being the point of origin for the hemorrhagic fever.

Focusing on a specific place creates something particular from something that could have happened anywhere. There’s nothing peculiarly distinctive about Lassa village in Nigeria, compared to any other village five or 50 miles away. Lassa was just the first place where a white missionary’s death drew the attention of authorities. And yet, in the aftermath of that moment, as “Lassa fever” came to identify a fearsome hemorrhagic fever, the town of Lassa became a shadow of its former self.

Likewise Norwalk, Ohio, still deals with its association with noroviruses, first identified from a 1968 outbreak in the small Midwestern town. One of the Norwalk-type viruses causes an acute stomach bug that was historically known as the “winter vomiting disease” and still causes widespread illness today.

Building blame into a name

Insisting on emphasizing COVID-19’s origins within China, even though the disease is now global, plays into racist stereotypes, including about culture and food.

Early conversations about EVD, marked as particularly African with its name, focused on eating “bushmeat,” a term from the colonial era to describe meat from hunted animals, rather than from domesticated animals. Talking about “bushmeat” allowed people to characterize those suffering from EVD as primitive or exotic. It also implied that West Africans were responsible for bringing EVD into global circulation because of what they ate or how they lived.

In fact, the wider spread of EVD in 2014-15 beyond the rural hinterlands of Guinea had everything to do with underfunded health systems in the affected nations and little to do with what people ate.

A similar process unfolded with assertions that a “wet market” in Wuhan was the culprit of zoonotic spillover that resulted in COVID-19. Scientists don’t yet know how relevant Wuhan’s live-animal markets were for this global epidemic, although they do know that viruses jump from animals to humans, and back again, frequently.

Recent research suggests that one of Wuhan’s “wet markets” was relevant for human-to-human transmission, as a place of close contact, rather than a space of human-animal contact. Ultimately, Wuhan’s historic position as a national high-speed rail and commercial hub is likely to be far more important for the wider dissemination of COVID-19 than where and how people shopped and ate.

Focusing on the wrong things

Understanding disease ecology and patterns of transmission at a point of origin are important for biologists and epidemiologists. But persistently linking a disease to a specific place – particularly when other consensus terms exist – serves to keep public attention on the outbreak’s first spillover moment.

This focus on how an emerging disease originally reached human populations sends a mixed message about who is at risk of infection or how to prevent the disease in an ongoing epidemic. This is exactly the situation playing out in the United States right now.

Once a disease has started circulating in human populations, its point of origin is far less relevant for a general public looking to stay healthy or public health practitioners trying to control a person-to-person epidemic than, for instance, good hand and respiratory hygiene or access to medical care.

Further, tagging China or Wuhan amid this global pandemic undermines a sense of mutual responsibility and fundamental human connectivity, values that are vital amid this human crisis.

By focusing on the novel coronavirus’s emergence in a place exotic to many Americans, U.S. officials are emphasizing the disease’s past origins rather than its present danger. Playing up the “foreign” origins of COVID-19 in Wuhan and China allows governments to lay blame. But it also allows people to justify a lack of caution – it’s a problem from “over there,” not one that “we” are making worse – rather than undertake the everyday measures needed to slow down the spread of disease.

Calling COVID-19 the “Wuhan virus” or the “Chinese virus” is absurd when it has spread globally. Intentionally referring to COVID-19 as a “Chinese virus” only inflames animosity and hinders the real work of public health and disease prevention.

This is an updated version of an article originally published on Feb. 18, 2020.