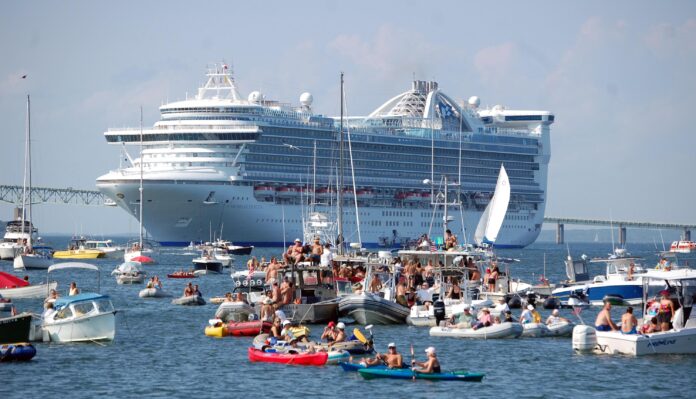 The waters outside the hotels – new and old – in Newport, are turbulent these days, as what had been a likely robust cruise season falls victim to a global virus. The hotels are virtually empty, the restaurants and attractions closed.

And for Newport, which could anticipate 3.3 million visitors this year, some 200,000 from more than 100 cruise ships, it means millions, maybe hundreds of millions of dollars lost, according to Evan Smith, the beleaguered executive director of Discover Newport.

“The second quarter of 2020 is total devastation,” Smith said. “We’re losing tens of millions, if not hundreds of millions of dollars. America is shutdown. No one in the travel industry has ever seen anything as impactful as this.”

This was to be a robust year for cruise travel to Newport and New England. It goes in five-year cycles, Smith said, and this was to begin an up cycle. Easy to tell from the list of cruises expected in Newport, beginning early April, but predominately scheduled for the fall when 90 percent of cruises are expected.

Most of the ships, Smith said, have international ownership and international crews. The largest carry 2,000 to 5,000 passengers, and a ratio of one crew per three passengers.

While in the overall scope of Newport tourism, the cruise industry represents a small portion of visitors, its real value may be in visibility.

“Visually, it seems very significant, but visitation is less than 1 percent of the entire year,” Smith said.

The first of those ships is due April 7, and while it has not officially canceled, and Rhode Island has no directive relative to cruise ships, Smith said it will likely cancel, as will most, if not all that are scheduled this Spring.

At 1 pm today, after the story was published, the Governor responded to a question from What’s Up Newp and said while she’s not prepared to say what her plans are on travel conditions, she does plan on rolling out restrictions related to cruise ships. The Governor said that anyone who travels to Rhode Island from out of the country must self-quarantine for 14 days.

Later today, after the story was filed, the governor’s office was reporting that the April 7 visit by the Amadea and the April 24 visit by the Summit have cancelled. A spokesman for the governor said they had been informed by the City Manager’s office.

Mayor Jamie Bova confirmed that the City Manager had been informed, and further confirmed it with the harbor master. Meanwhile, Smith still had not reported the cruises cancelled, and a visit to the websites of both cruise lines showed the Newport visits were sill listed as active.

However, it is quite likely the two visits will or have been cancelled.

Currently, there are reportedly more than 30 oceangoing cruise ships still at sea and looking for a port that will accept them.

Even the fall dates remain questionable, as the cruise industry, Smith said, will need to “reinvent itself…cruise ships have gotten a lot of negative publicity,” some of which he said is “unfair,” with the number of illnesses on the cruise ships a small percentage of actual passengers.

Nonetheless, the industry has suffered, and Smith said “they’re going to have to reinvent themselves, project a higher level of cleanliness and safety…the loyalty base is looking for significant improvement in terms of sanitation.”

The coronavirus brought what was a highly successful cruise season to a sudden end.

“Cruising was the hottest trend in travel before this happened,” Smith said.

He has hope that when the medical community “pivots” from what is an escalation of the virus to what are fewer new cases, and a return to normalcy, so will tourism.

“I don’t think the lust to travel, the spirit to travel has been reduced,” Smith said. “The spirit and quest to travel is very strong.” He’s hopeful this “pivot” happens by late May or early June.

Even then, much damage would have been done, and future events endangered.

He particularly worries about smaller businesses that may not survive this shutdown without robust help from federal and state governments, offering considerable stimulus packages.

Meanwhile, forecasters are trying to project forward. They’ve already done that through June, Smith said, and are now looking at the summer. At stake are the major festivals – folk, jazz and music in Newport, Rhythm and Roots and Seafood Festival in Washington County.

As uncertain as the future of COVED -19, so is the immediate future of the cruise season and perhaps cruise industry, of tourism in Newport and worldwide as our waters remain quiet, hotels vacant, restaurants and attractions closed.