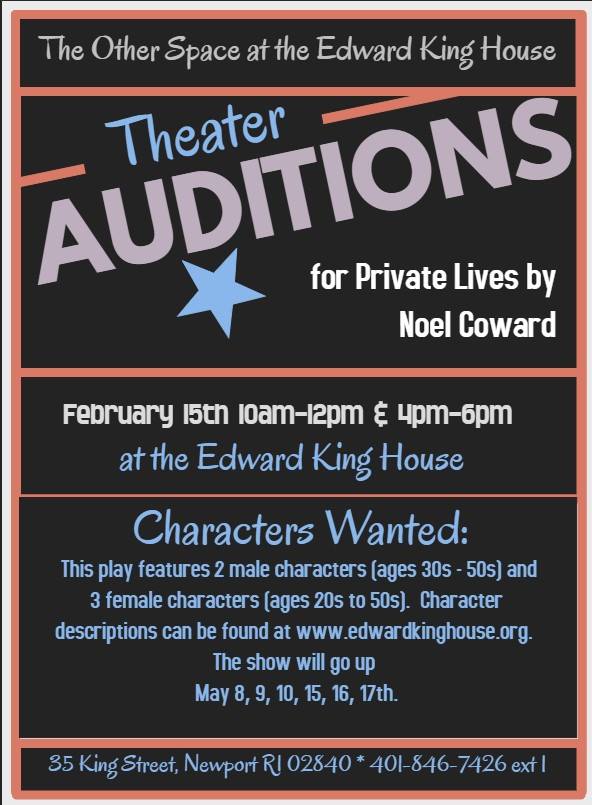 The Other Space at the Edward King House today announced that the Spring production for 2020 will feature the comedy “Private Lives” by Noel Coward and directed by Abby Adams.  Open auditions will be conducted on Saturday, February 15th from 10am to 12pm and 4pm to 6pm at the Edward King House, 35 King Street in Newport.  The play features 2 male characters and 3 female characters ranging in age from 20 to 50-something.  Character descriptions and more information about the show can found at www.edwardkinghouse.org or by calling 401-846-7426 ext. 1.  The show will run on May 8, 9, 10, 15, 16 and 17th.

About the Play: Passion, laughter, romance, anger, and love set the stage for a battle of the sexes as divorced couple, Amanda and Elyot, find themselves unwittingly thrown together in Coward’s classic comedy of manners. Unknowingly booking adjoining rooms while on honeymoon with their respective spouses, Victor and Sybil, Amanda and Elyot are forced to face their true feelings for each other. Realizing they have made a pair of mistaken marriages; the divorcees attempt to escape their mismatched partners. With haste, and under the cover of darkness, they flee their honeymoon hotel and unsuspecting spouses in search of privacy at Amanda’s secluded Paris flat. Despite their passion for each other, Amanda and Elyot begin to bicker violently, just as they had done during their marriage. It is clear that the couple cannot live with each other, but cannot live without each other either. When they are discovered several days later by their jilted spouses, all four lovers must finally acknowledge just who is really suited to whom. Fast-paced, witty, and passionate, Noel Coward’s comedy is a delightful romp.