This story originally appeared on www.usnwc.edu, see the original story and more from the Naval War College here.

With visits from Santa, the U.S. Naval War College community celebrated the holiday season on Dec. 15 with a concert by Navy Band Northeast.

The band played an hour-long “Holiday by the Bay” show that included winter favorites such as “It’s the Most Wonderful Time of the Year” and instrumental versions of classic carols.

“This unique event is our gift to the War College, the naval station and to the greater Newport community,” Rear Adm. Shoshana S. Chatfield, Naval War College president, told the audience from the stage.

“I hope that our holiday celebration warms your heart, brings a deeper meaning to the season and draws you and your family closer together,” she said.

Navy soloist Musician 2nd Class Rachel Vennel treated the audience to a feel-good version of “What Christmas Means to Me” but also a soulful rendition of “Silent Night” that included a reading of a soldier’s Christmas letter to his mother from the trenches of World War I.

During parts of the concert, a screen behind the stage showed images of deployed Navy personnel around the fleet.

The band was assisted by the Newport Navy Choristers, a singing group formed in 1953 that includes active-duty, reserve and retired service members, civilian employees and family members.

“What I wanted was a concert event that had parts to touch every heart, a part for each faith and a chance to knit us all together in a common bond of holiday joy,” Navy Band Northeast’s director, Lt. Joel Borrelli-Boudreau, said after the event.

About 800 people attended the show in the college’s Spruance Auditorium. The free event was open to the public and the military community, but attendance had to be limited by the number of seats available.

The event was also livestreamed, and the recording is available here: www.dvidshub.net/webcast/22007.

Audience member Carole Helman of Wickford said it was the first time she had ever visited the Naval War College or Naval Station Newport.

“I love the military, love all military bands,” Helman said before the concert. “I was fortunate to have a military family invite me today.”

Santa Claus made two appearances at the event. First, in a video visit from the screen, St. Nick told the children in the audience that he has them on his “nice” list.

“Keep your holiday spirit all through the year,” said Santa, who was played on the screen by Navy reservist Cmdr. Ty Lemerande.

Santa also remembered the Sailors serving far from home over the holidays.

“You know, you Sailors are probably the only people who travel more than I do,” Santa said, getting a laugh from the audience.

“Anyone you know who wears a uniform is so very special. Do you want to know why? Because they stand for something, something greater than themselves. They stand for freedom and fairness.”

Santa finally made it to the theater in person at the end of the concert, shaking hands, high-fiving the crowd and sharing the spirit of the season.

The final song of the night, “Sleigh Ride,” was led by Chatfield, to whom Santa delivered the gift of a conductor’s baton for the task.

“I would like to wish you a very happy holiday,” Chatfield told the audience to close the concert. “May health, happiness, prosperity and love fill your days over the holiday season.” 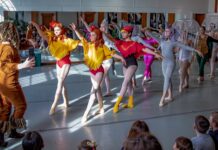