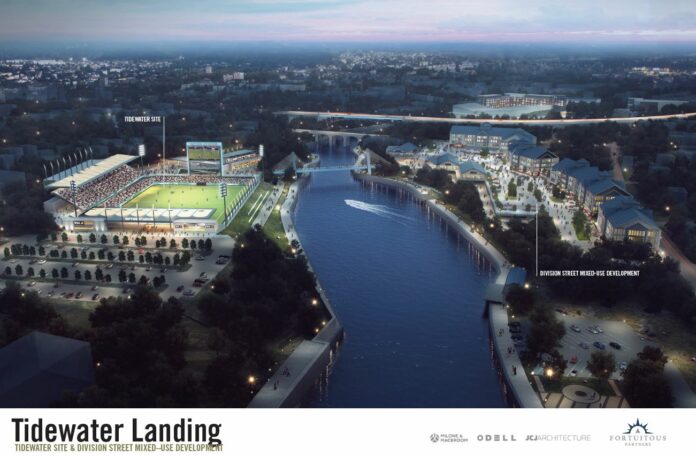 PAWTUCKET, RI- Governor Gina Raimondo and Pawtucket Mayor Donald Grebien today announced the largest economic development project in Pawtucket’s history. The estimated $400 million project will transform Pawtucket’s waterfront with hundreds of thousands of square feet of new development, including a new professional soccer team that will compete in the USL Championship – the second division of professional soccer in the United States.

The following information is from a press release from the Governor’s office.

“Today is an exciting first step towards a $400 million investment in Pawtucket’s future,” said Governor Gina M. Raimondo. “This economic development project will establish a professional soccer team from a leading national league here in Rhode Island, revitalize the waterfront and downtown and create more than 3,500 jobs. Most importantly, it will transform this area into a vibrant hub of activity like we haven’t seen in decades.”

“This is an opportunity of a lifetime for the city of Pawtucket, the Blackstone Valley, and the state of Rhode Island. This $400 million investment in one of Pawtucket’s opportunity zones will create jobs and will be a transformative economic development at the gateway into our state. It’s a natural expansion from our beautiful Slater Mill National Park to the city’s underutilized riverfront. The Blackstone Valley is prime with development opportunities. The Fortuitous Project along with the Pawtucket/Central Falls commuter rail stop are game changers,” said Mayor Donald R. Grebien. “The Fortuitous Partners’ vision aligns with what the residents of Pawtucket need and deserve. We thank Governor Gina Raimondo, Speaker Mattiello, Senate President Ruggerio, the General Assembly, CommerceRI, the City Council, the Pawtucket Redevelopment Agency, and everyone who assisted in this project that will be a major catalyst for years to come.”

The project, which will be called Tidewater Landing, will also include expanded waterfront access through a riverwalk park connecting downtown to the currently underutilized riverfront, a new pedestrian bridge, and other key infrastructure upgrades. In addition to a new multi-use stadium, the selected developer – Fortuitous Partners, an investment firm specializing in sports-anchored mixed-use real estate projects – is expected to include a new indoor sports complex, market-rate and workforce housing, a hotel, and commercial office space. It is estimated that the full project will create more than 2500 direct and indirect construction jobs and more than 1200 direct, ongoing jobs once completed.
It is Fortuitous’ intent to finance the stadium privately. It is expected that public investment for this project will be primarily focused on infrastructure and other non-stadium components of the development plan.

The total amount of the public investment (which will come from both State and City revenues) will be determined during the 120-day due diligence period. Based upon preliminary economic impact estimates over a 30-year financing period, the project is expected to pay for itself. In fact, preliminary estimates indicate that taxes received by the State and City over that period have the potential to be as much as double the public investment.

The public investment is expected to be approximately 20% of project costs (in the range of $70 to $90M total, with an anticipated $60-$80M of that total to be derived from State revenue). Final public investment will be determined based on factors such as site conditions, parking needs, and other project-specific considerations. The finalized plan will incorporate strong taxpayer protections for both the state of Rhode Island and the city of Pawtucket. Provisions will ensure the public pays for performance according to agreed upon project milestones, which will be determined in the coming months. All state investments will be made based upon completion of project phases and other project milestones.

“Tidewater Landing is a phenomenal opportunity for the City and region, and we are incredibly excited to be working with the State of Rhode Island and the City of Pawtucket to make it a reality,” said Brett M. Johnson, founder and partner of Fortuitous Partners and Co-Chairman of the Phoenix Rising Football Club. “The initiative will transform the area by maximizing Pawtucket’s many assets to create a vibrant live, work, and play environment. The proposed private investment of over $300 million will boost the economy of the Blackstone Valley, create jobs, and transform the entire community. The combination of a successful USL Championship club and the surrounding mixed-use development will make Tidewater Landing a destination of civic pride for decades to come.”

The Tidewater Landing Development will include:

In addition to being home to a USL soccer team, the stadium will also be available for other uses including concerts and public sports uses including football, lacrosse, rugby and field hockey, and amateur soccer.

The Tidewater Landing project will include key public infrastructure investments and new developments which will transform the underutilized Pawtucket riverfront into a vibrant, pedestrian-friendly corridor. These investments include a pedestrian bridge spanning the Seekonk River that will reconnect Pawtucket to its riverfront. Riverwalks will also be developed on both sides of the river.

The project is currently focused on the Tidewater and Division Street sites that are owned by National Grid and the City, respectively. The final development sites, phasing, construction costs and schedule for the project will be finalized during an upcoming due diligence period. The goal is for the USL professional soccer team to kickoff in their new stadium in time for the 2022 season. Fortuitous has secured the exclusive rights to the USL Championship team in Rhode Island and will build an ownership group headlined by Brett M. Johnson. Fortuitous and the USL team, during the due diligence period, will enter into a long-term commitment to the stadium.

“Today we take an important step towards the revitalization of Pawtucket and the building of a new Rhode Island destination,” said Rhode Island Secretary of Commerce Stefan Pryor. “This project involves the creation of a vital hub of sports, commercial, and residential activity; it also has the potential to be catalytic, sparking additional development in areas beyond the project boundaries. Thank you to Governor Raimondo, Mayor Grebien, and the Fortuitous team for your leadership, vision, and drive. Thank you also to the leadership of the General Assembly for providing us with the tools to make this project happen.”

“When the General Assembly proudly enacted the legislation creating the Pawtucket Tax Increment Financing earlier this year, we were hopeful it would generate such an exciting economic development opportunity as this one,” said Speaker Nicholas Mattiello. It has been a collaborative effort between the Pawtucket House delegation of Reps. Mary Messier, Raymond Johnston, Carlos Tobon, Jean-Philippe Barros and Karen Alzate, in working with Mayor Grebien and the Commerce Corporation, to attract this great project which will transform the city’s waterfront. I thank Brett Johnson and Fortuitous Partners for their faith and foresight by investing in Pawtucket’s future and bringing this extensive business and retail development, which will generate thousands of jobs, and the fast-growing sport of professional soccer to our state.”

President of the Senate Dominick J. Ruggerio said, “Pawtucket is the northern gateway for our state, and this project will help the city to revitalize and grow. This is a transformative project not only for Pawtucket but also for our state. I want to commend the entire Pawtucket delegation for sponsoring the legislation that made this possible, and especially the prime sponsor, Sen. Sandra Cano, for her efforts.”

In April, Commerce and the City of Pawtucket issued a joint RFP seeking proposals for the reuse of McCoy Stadium & Pawtucket Downtown Redevelopment. Six proposals were received in response to that RFP.
An RFP review committee made up of representatives from the Commerce Corporation and the City of Pawtucket evaluated the proposals based upon the information contained in the respective submission packages and their responsiveness to the submission criteria. The RFP review committee met today and voted unanimously to move forward with the proposal submitted by Fortuitous Partners. Commerce, the City and Fortuitous Partners today entered into a 120-day due diligence period which the parties have committed to negotiate in good faith to reach a definitive agreement where project scope and program, land assembly study, project economics, and market dynamics will be further refined. Today’s announcement does not preclude Commerce and Pawtucket from selecting one or more additional respondents for further development especially related to McCoy stadium.

“The Tidewater Landing project is a game changer for the State of Rhode Island, the City of Pawtucket and its passionate soccer community,” said USL COO Justin Papadakis. “We are thrilled to bring professional soccer to this great state and city. A USL Championship club to call its own in a world-class stadium will be a tremendous community asset and will unite all Rhode Islanders around a common cause.”

Background on Fortuitous:
Fortuitous Partners is an investment firm that invests in real estate developments and operating businesses, particularly in sports anchored mixed use real estate projects. The principals of Fortuitous have decades of experience in real estate, public and private company operations, private equity, fund management, and tax incentive counsel. Brett M. Johnson, Fortuitous Partners, Founder and Principal, is also co-chairman and shareholder of Phoenix Rising Football Club (PRFC) in the USL Championship Division. In three short years, PRFC has revitalized professional soccer in Phoenix with consistent sell-out crowds, a North American soccer record of 20 consecutive wins, a Western Conference Championship trophy, and is the current Regular Season Champion. Fortuitous Partners has the exclusive rights to bring a USL Championship League team to Rhode Island and are excited to bring the same level of enthusiasm, community engagement and performance to the market.

The Fortuitous team also includes Steven A Betts, a senior advisor to the PHX Rising and Fortuitous Fund. He has developed communities throughout the Mountainwest as well as large-scale office, industrial, retail and mixed use urban projects in metropolitan Phoenix. James Lang, Esq., a senior advisor to Fortuitous, specializes structuring in tax strategies that optimize the beneficial impacts for communities and return for investors.

Background on USL:
The United Soccer League (USL) is the largest and fastest growing professional soccer organization in North America, possessing nearly a decade of experience in bringing the world’s game to communities across the United States. Overseeing the USL Championship, USL League One, and USL League Two, the organization is built on a proven and recognized model in international football and counts more than 100 clubs in its membership.

Based in Tampa, Florida, the USL has grown over the past decade into a model organization with strong corporate partnerships, stable organizational leadership, and a dedicated staff that provides outstanding support to member clubs and outside partners. Sanctioned by the U.S. Soccer Federation and Canadian Soccer Association, the USL is #UnitedForSoccer, moving the game forward in the United States and Canada.

Through The Championship’s headquarters in Tampa, Florida, the league’s clubs are provided with unparalleled support with a growing team of more than 50 professionals across 17 departments, ranging from operations to marketing, communications and sponsorship.

The Championship has a national media partnership with ESPN, wherein all league matches are broadcast on ESPN+, ESPN3 and across linear channels. The league also operates USL Productions, which includes a state-of-the-art facility that produced and distributed more than 500 league matches and more than 1,000 hours of original content to national partners, local affiliates and international markets throughout the 2018 season.