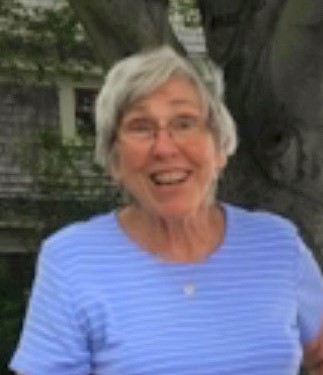 Patricia Ann Simmons of Middletown, beloved wife of Alexander B. Simmons Jr for 55 years, and daughter of the late James P. and Margaret M. Sullivan, passed away peacefully surrounded by family and her beloved dog Riley on Nov 1st.

After her retirement from Barrett & Co she was a regular fixture around the family farm stand and petting zoo and most recently helping out at multiple farmers markets selling Simmons Farm products.

Pat was an alumnae of the Rogers High School Class of 1961 and was instrumental in the class scholarship fund and Alumni Association activities.

Pat served as Vice President and later president of the Middletown Band Parents Association during the mid 80s and again in the early 90s. She was always ready to chaperone the band field trips.

Known for her gift of gab, Pat was a huge animal lover and a supporter of The Potter League and Save A Lab.

Her family would like to thank all of those friends and extended family members who sent their prayers and support during this difficult time.

A celebration of life will be held in the spring.