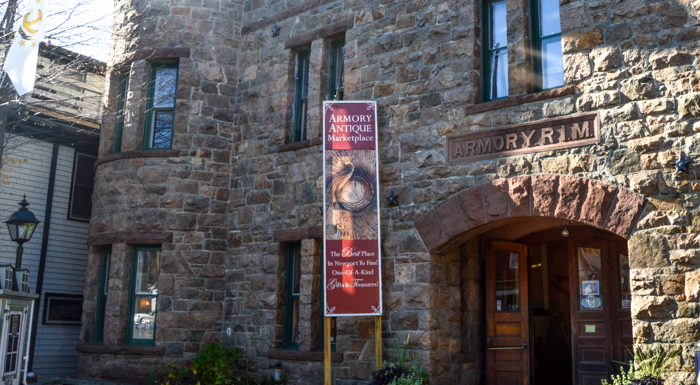 The Armory Antique Marketplace closed its doors to the public for the last time on Thursday, October 24th.

“The Armory as we know it has been a bustling and vibrant center of activity with a deep-rooted connection in our community. Through the years, we’ve shared our interests with many thousands of visitors, and built lasting relationships that will remain with us wherever we go.” Cynthia Lee, Co-Owner of The Armory Antique Marketplace wrote in an email to What’s Up Newp on Friday.

City of Newport officials in March formally closed on a deal to sell the upper two floors of the historic Armory building on Lower Thames Street to the National Sailing Hall of Fame (NSHOF) for $1,685,000.

As part of the agreement, the City will retain ownership of the building’s lower level unit, which serves as the home of the Newport Maritime Center and will continue to maintain exclusive rights to the adjacent Ann Street Pier, beach and right of way.

“All business operations at the Armory Antique Marketplace have ceased due to the recent sale of the building”, according to Lee. “The Armory will be open to vendors who must remove inventory from the premises no later than October 30, 2019”.

Located at 365 Thames St., the Armory was originally built in 1894 as one three such facilities positioned around the state to house local militia and was later used by the state National Guard and U.S. Naval Reserve. However, with its close proximity to Newport Harbor, the building also has ties to the City’s sailing community as well. In addition to serving as the home of the Newport Maritime Center since 2012, the main level was also used as the press center during the City’s America’s Cup heyday of the 1960s, ‘70s and ‘80s.

In 1983, the state ultimately conveyed the property to the Redevelopment Agency of Newport, which held possession of the building until 2010 at which it was formally transferred to the City.

For more of our coverage on the National Sailing Hall of Fame click here.